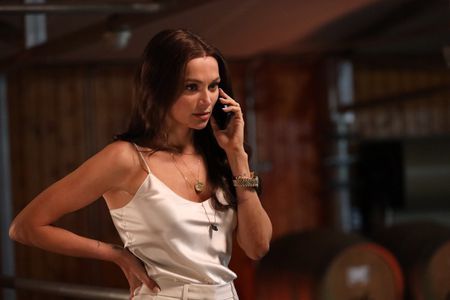 Reunions were expected and unexpected, and the puzzle pieces come together in episode 4 of Promised Land. the Sandovals’ and others’ alliances seem to alter again. It was a big hour for Carmen. Joe ruined the Taste of Sonoma for Carmen and Margaret and kept Margaret away from her. Antonio confronts Javier about his past of sleeping with males, which he keeps hidden from the rest of the group. Read the recap of episode 3 below.  Season 1 will consist of ten episodes. You’ll be looking forward to the launch of Promised Land Season 1 Episode 4 on ABC. What comes next? (www.tvacute.com) Here’s all you need to know about the fourth episode of ‘Promised Land’ Season 1, with exclusive photos and a release date.

“El Regalo” (The Gift)  is the title of the fourth episode. The episode was written by Michael Jones-Morales and directed by Felix Alcala. In this episode, Lettie and Joe go through a tough patch. they leave town. Margaret will be thrilled to be invited to Carmen’s 25th birthday party.  The return of father Ramos to Sonoma has caused a stir in the Sandoval family. Watch the preview below.

"People don't change, Mateo. Only their lies do." #PromisedLand is all new TONIGHT at 10/9c. 🍷 pic.twitter.com/bPbw64O1OM

As if you needed any more reasons to watch Promised Land, here are plenty more.

As if you needed more reasons to watch #PromisedLand ☝ pic.twitter.com/tgQYarE1mG

Where can I find Promised Land to watch and stream?

You may watch Promised Land online at ABC.com if you miss it on Monday nights on ABC. Starting Feb 15, it will also be available on Hulu the following day..

Margaret and Carmen meet up. Michael is awestruck when Carmen shows him her latest wine bottle label design. Lettie and Billy discuss Junior, who has found a new sense of purpose via philanthropic work. Joe impresses Honeycroft with his palate and precise representation of the wine over a meal with the staff in 1987 to commemorate the season. When they’re looking for Juana, Lettie eventually manages to answer the phone and speaks with her sister Rosa. Pedro, the man who stole his cousin’s truck, has her kidnapped and is keeping her hostage for $5,000. Joe informs Veronica and Antonio that the new general manager is Javier, the son of a family friend. Antonio objects to Joe’s hiring of Javier. Margaret reveals her history with Joe and Lettie and expresses her desire to make amends, but she is intrigued by Carmen’s suggestions. Antonio confronts Javier about his past of sleeping with males, which he keeps hidden from the rest of the group.

Veronica’s financial advisor pays off Delgado. But she can’t as the account is empty. Michael took it. Mateo invites Daniela to supper with him and his family. Veronica confronts Michael over the cash. At dinner, Junior keeps praising Father Ramos. Carmen saw their mother. It stirs up the table, and she says Margaret is giving her a chance. Honeycroft accuses a worker of taking his watch and orders everyone to work an extra hour without pay. Everyone suspects Joe, but he denies it. Joe encounters Wayne, a potential business partner who is casually prejudiced. Margaret is invited over by Lettie. On hot topic, they reveal a shared past secret that could destroy them both. Margaret hands up the watch she stole from her father to Joe. Margaret’s not chosen for Taste of Sonoma, they inform her. Daniela meets Joe. Following the discovery of the two, Veronica is forced to choose between work and family.

Javier asks his foreman father Gonzo about the truck, and Antonio joins in. Billy runs into Lettie near where they used to stay and asks when she’ll inform Joe he’s returned. They overhear the conversation and notice Javier, Antonio, and Gonzo standing outside the truck. Joe receives $4000 from Lettie for the watch, with the remainder coming from the other workers. Joe ruined the Taste of Sonoma for Carmen and Margaret and kept Margaret away from her. Veronica hires Delgado instead to stalk her husband. Finding learning the truck is tied to a murder, Antonio wants to keep it hidden to protect his father. Jose offers to go to Bakersfield and save Rosa. Joe arrives with Junior to donate his truck to the school for the game Junior wants to coach, and he finds Lettie and Billy together. Billy and Joe finally speak after years.