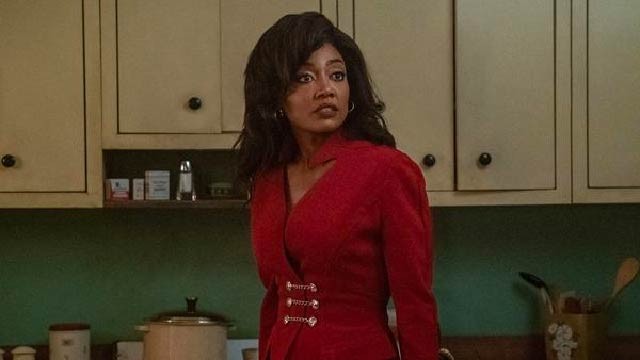 In the penultimate episode, we found more tension than before. we saw more striking easter eggs in this episode. In an emotional heartbreak episode, relationships attack their loved ones as well but as expected Lou does survive. Raising Kanan continues to improve, with Power Book 3 Episode 9 seeing Raq tasked Kanan with dealing with a threat to the family in the form of Detective Howard. Kanan was given the job of staring his father in the eyes and firing the gun. Before Kanan squeezed the trigger, Detective Howard didn’t get a chance to inform Kanan that he was his father.  This is something, Marvin’s wrath and rage with juke. This is the first time we’ve encountered Jerome. We also saw a very heartwarming scene of Jukebox and Marvin’s relationship. When they clash with their relationship and a scuffle breaks out between the two. viewers will have to wait until episode tenth to find out whether or not the Det. Howard will survive.  the prequel will still surprise fans.

The conflict between Unique and Raq has already claimed a significant number of lives and now it appears that a member of the Thomas family may be among them. The destiny of Kanan’s uncle Lou-Lou is in doubt following a petrol bomb attack by Unique’s gang.. the story takes an unexpected and devastating turn. On the other hand, Jukebox (Hailey Kilgore) isn’t interested in blaming anyone for her partner Nicole’s (Annabelle Zasowski) terrible overdose death, and she told Kanan in episode 8.

The attack on Lou-Lou (Malcolm Mays) has been just one of the many twists and turns throughout the Raising Kanan episode 9. This Sunday at 8/7c, Raq (Patina Miller) sends Kanan and Jukebox on two different missions that will shape and seal their futures. Kanan, and Hailey Kilgore, said fans will get a closer look at their characters. We never imagined the drama would come to a close tonight with the apparent death of Detective Howard.

Now we get ready for Power Book III: Raising Kanan episode 10 next week, the most important thing to remember is that it is the series conclusion. This is by far the most important episode titled “PAID IN FULL” of the season! But don’t disappoint, keep in mind that the Raising Kanan will be returning for a second season before moving on to the next section. That’s at least one thing you don’t have to be concerned about for the time being.

But, as we saw in Raising Kanan episode 10 promo Det. Howard appears to be alive, whether this remains the case and whether he survives remains to be seen. Kanan, on the other hand, did not perform the job on him as Raq had instructed. We also witnessed Jukebox and Marvin’s relationship come to a head in an emotional sequence, while Lou Lou begins his recuperation from the attack by Unique in the previous episode.

Much of the upheaval and drama that has occurred throughout the season has been building up to this point, where lives are in the balance and some decisions could alter the course of the title character’s life forever. We can’t wait to see what happens in the grand final episode. www.tvacute.com brings you a promo of Raising Kanan episode 1.10 which you can watch below. So that you can prepare yourself for the upcoming new episode. And according to the official synopsis provided by Starz, the Raising Kanan season finale will be as follows.

Raising Kanan Finale Episode 10 Synopsis: As the situation in the neighborhood turns dire, Raq scrambles to get Kanan out of harm’s way.

Raising Kanan Finale Episode 10 titled “PAID IN FULL” will be released on Sunday, September 26, at 8/7c, on Starz. Power Book 3: Raising Kanan can be viewed on Starz.com as well as the Starz app.  Starz is also available to subscribers who have an active subscription to Philo (for an additional $9/month), or fuboTV (8.99/month). Starz can be added to your Hulu and Amazon account for $8.99 per month. Hulu (at 12:01 AM.)and Amazon offer a seven-day trial for free.  The series was renewed for a second season ahead of its premiere.

Will there be a second season of Power Book III: Raising Kanan?

Yes! As we mentioned Starz ordered a second season of the crime prequel before the first season had even started. As Kanan’s age continues to rise, we may see younger versions of Power characters like Tommy and Ghost in the future, as well as more ’90s fashion and music as the show moves through the decade.

“One season isn’t enough to convey Kanan Stark’s coming-of-age narrative with his mother, Raq, a feisty and successful lady who is a force of nature,” said Jeffrey Hirsch, president, and CEO of Starz. “With the worldwide demand for more of the Power Universe, it was evident that the Kanan story needed to be continued.” However, it appears like this spin-off may have its own spin-off since star Omar Epps has revealed interest in a solo series centered on his character Detective Malcolm Howard.

The episode began two days after the events of episode 8, with Marvin’s rage since he was fired from the family business. Lil Rob travels to Marvin in order to film Unique and his gang, but he misses Unique. He then kills Lil Rob for speaking to the cops and handing Kanan up to them. Raq ends his relationship with Symphony. Nicole’s parents report Jukebox’s alleged involvement in Nicole’s death to the police. Lou-Lou is still unconscious in the hospital, and Howard foils a plot by Unique’s men to kill him. He then issues an ultimatum to Raq, forcing her to meet with him and Kanan.

Burke inquires about Nicole’s death, as well as Kanan and the nasty crack, but Jukebox refuses to provide any information. Marvin accepts to rejoin the company when Raq urges him to. After seeing photos of them together and a video of them performing, Marvin confronts Jukebox about Nicole. Marvin almost kills her by choking her during their quarrel. She later rushes to Burke and informs her that the cops are being attacked. Raq assigns Kanan the responsibility of assassinating a man, while Unique orders his men to eliminate everyone associated with Raq. Kanan meets with Malcolm and shoots him dead while wearing Unique’s jacket.