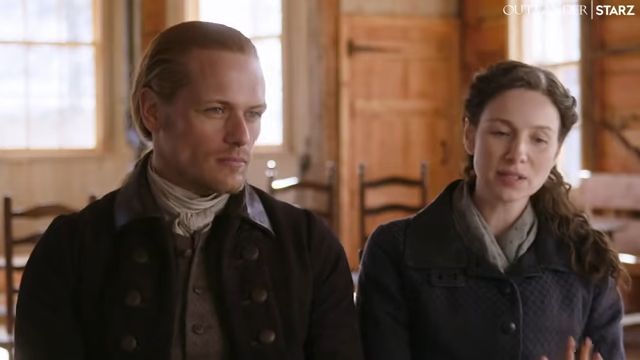 Is the fan ready to be reunited with family at Fraser Ridge? The historical time travel- romance-drama by Diana Gabaldon, Outlander is coming back for another chapter. The filming of Outlander Season 6 will end this week. Before getting to know more about Outlander Season 6, let’s take a look at Season 5 at www.tvacute.com.

As we see in Outlander Season 5, Jamie Fraser fights to protect the people he loves. Brianna and Roger marry, Murtagh is shot. Roger is captured by the British and hanged but he survives. Claire is abducted and brutally raped by Lionel Brown and his men, Mrs. Bug pacifies Brown and kills her. Jamie gives Lionel’s body to his brother Richard in Brownsville. Richard Brown threatens Fraser’s Ridge and Jamie’s family.

The first teaser from the forthcoming season of Outlander was published on Saturday, and it shows the folks of Fraser’s Ridge going about their daily lives. Claire and Jamie snuggle up in bed. Marsali is holding a newborn (also naturally). Young Ian and Malva Christie (played by newcomer Jessica Reynolds) size each other up in a field, while Bree and Roger exchange a warm glance. And while that is concerning, we are more worried about a quick sight of a man’s limp and lifeless arm, attached to a body being taken back to the mansion. Fergus is saddened after his and Marsali’s baby, Henri-Christian is born a dwarf, as those who have read the book will recall.

A summary for the new season has also been issued by Starz. Things are about to get very difficult, with the Revolutionary War set to swing into high gear and the Christies destroying the peaceful atmosphere of Fraser’s Ridge.

The sixth season of “Outlander” sees a continuation of Claire and Jamie’s fight to protect those they love, as they navigate the trials and tribulations of life in colonial America. Establishing a home in the New World is by no means an easy task, particularly in the wild backcountry of North Carolina – and perhaps most significantly – during a period of dramatic political upheaval. The Frasers strive to maintain peace and flourish within a society which – as Claire knows all too well – is unwittingly marching towards Revolution. Against this backdrop, which heralds the birth of the new American nation, Claire and Jamie have built a home together at Fraser’s Ridge. They must now defend this home – established on land granted to them by the Crown – not only from external forces, but also from the increasing strife and conflict in the community within their care. For the Frasers and their immediate family, “home” is more than simply a site in which they live, it is the place where they are laying the foundations for the rest of their lives. If Season 4 asked “What is home?” and Season 5 asked, “What are you willing to do to protect your home?” then Season 6 explores what happens when there is disharmony and division among the inhabitants of the home you’ve created: when you become an outsider, or an ‘outlander,’ so to speak, marginalized and rejected in your own home.

Outlander season 6 continues the story of Fraser as he moves to a new world and will be  based on the book A Breath of Snow and Ashes. Season six will be shorter than the rest of the season with only eight episodes, including a 90-minute special premiere episode aired on Starz. Season 6

Directed by: Kate Cheeseman   Written by: Matthew B. Roberts

Directed by   Written by: Shaina Fewell

Directed by   Written by Toni Graphia

ICYMI: Season 6 is going to be amazing. See for yourself with this look behind the scenes.

Catch up on Seasons 1-5 of #Outlander any time on the @STARZ App: https://t.co/izxi7qPRux pic.twitter.com/KTS6cM4xKf

Showrunner Matthew B. Roberts has promised in a statement that they will be filming an extended season seven with 16 episodes next year as life returns to normal.”