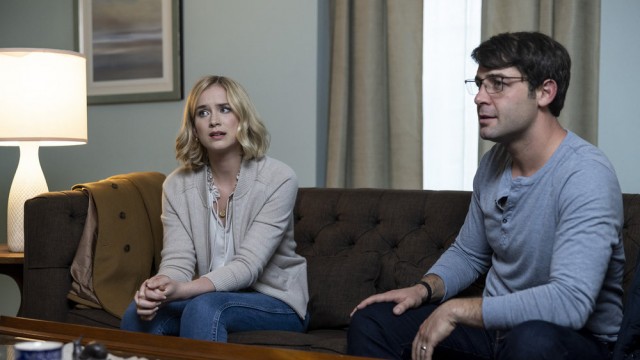 James Wolk’s new series Ordinary Joe Season 1 Episode 3 depicted three different Joes dealing with change and how it would affect not just themselves, but also their significant others and family. Music Joe faced a snag in his search for his son in the last episode. There’s no proof that he’s the father because his name isn’t on the birth certificate.. What can we expect from the new episode 4? In order to see this, we’ll have to move on. “Shooting Star” the fourth episode, promises to be more interesting. A promo from Ordinary Joe Episode 4 can be found on www.tvacute.com, as well as a synopsis.

On Ordinary Joe Season 1, Episode 4, each of the Joes will face a difficult situation. How will each of them deal with their uneasy feelings? Cop Joe, for example, must deal with the fact that he has killed someone. He shot someone in the course of duty, but he didn’t intend to kill them. The fact that that person has died is weighing heavily on his thoughts. Music On Ordinary Joe Season 1, Episode 4, Joe searches for his son. But it isn’t going to stop Music Joe. Will Joe and Amy, be able to come to an agreement when Amy no longer wants children? Meanwhile, Nurse Joe and Jenny will have to talk about Jenny’s education. She needs to respond to the task very away.

Ordinary Joe Episode 4 Synopsis: Each Joe must come to terms with an unfamiliar and challenging feeling. Music Joe enlists help to look for his son. Cop Joe navigates the aftermath of a shooting. Nurse Joe and Jenny discuss a big career opportunity.

‘Ordinary Joe’ Episode 4 will release on Monday, October 11, 2021, on  NBC at 10:00 PM – 11:00 PM on Each episode should be around 45 minutes long. Ordinary Joe Episode 2 Online Streaming Options – If you have a cable subscription, you can watch ‘Ordinary Joe’ episode 2 on your TV. Simply tune into NBC at the above time and date to see the series premiere. After its broadcast, the episode will be available on NBC’s official website and mobile app. Those without a cable subscription can watch the episode on Hulu Live TV, Xfinity, YouTubeTV, Fubo TV, and DirecTV. These include Google Play, Spectrum, iTunes, Amazon Prime Video, YouTube, and Vudu. The series will also be available to Hulu subscribers.

Jenny (Elizabeth Lail) and Joe exchange a clumsy kiss. Chris wishes to make his mother’s birthday one to remember. He is concerned that his parents may divorce. Frank (David Warshofsky ) visits an adoption agency with Rockstar Joe. The receptionist is enamored with him, but she can only assist him if his name appears on his birth certificate. Bobby Diaz is assisting Amy with her campaign preparations. Joe doesn’t appear to be overjoyed that their location has been designated as campaign headquarters. Cop Joe pays Eric a visit at his restaurant. Eric brags about his new baby and makes fun of Joe’s date with Amy.

Jenny visits Bobby’s campaign offices to inquire if Wayne Coleman was a donor and how he transitioned from a supporter to an aggressor. For Jenny’s birthday, Eric planned a romantic excursion for her and Nurse Joe. Frank refuses to assist Rockstar Joe in his search for his son until he first tells Amy the truth. Bobby Diaz’s tremors are becoming more noticeable, according to Nurse Joe. He informed his supervisor, Jenny’s father. Bobby is dissatisfied. Amy is in a relationship with Cop Joe. He is reminded that he is married to her.

That night, he decides to cancel a date with her. She becomes enraged and dials Joe’s number. She eventually finds herself at her first Friday night meal. Rockstar Joe showed up at Jenny’s party and completely forgot about Amy’s campaign speech. He was relentless in his pursuit of Jenny’s birth certificate. He was late for his campaign speech, which enraged everyone. Jenny confided in Nurse Joe that she didn’t feel safe leaving Chris alone. They had a cake party at home with the three of them. Joe wishes to attend couples counseling. Jenny opts to stay instead of accepting the grant.