New Magnum PI Season 4 Episode 20 [Season Finale] Is Magnum and Higgins to get together? 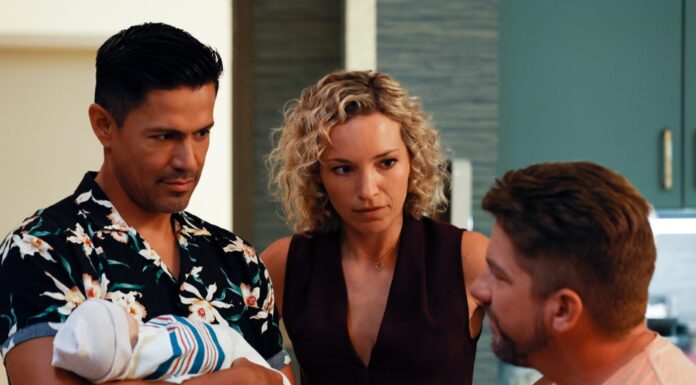 Jay Hernandez’s series Magnum P.I  Season 4 Episode 20 will air on Friday, May 6, 2022, on CBS. Is it possible for Magnum and Higgins to get together?  Is there going to be a twist?

In Magnum P.I. Season 4 Episode 19, Magnum fumbled out his quandary about his feelings toward Higgins. They were both taken aback when a disoriented man revealed he woke up on the beach drenched in blood. T.C. was caught aback when Cade’s biological grandmother dropped over unexpectedly. Meanwhile, as they prepared for the birth of their first child, Rick’s love for Suzy grew stronger.  Read Magnum PI (2019)Recap below. After watching episode 18, fans are eager to see what the upcoming new episode has in store for them. You’ve come to the right place if you’re looking for Magnum PI Season 4 Episode 20 photos and promotional materials: www.tvacute.com.

Magnum PI Season 4 Finale Recap: Did Higgins and Thomas kiss each other

“Close to Home” is the Magnum PI season 4’s season finale episode. So, what’s in store for this episode? Magnum and Higgins will be dealing with a personal matter in this episode when Detective Katsumoto and his ex-wife are apprehended. This will be a plot that puts their resources and abilities to do tasks to the test.

Is Magnum and Higgins to get together?

Magnum PI Penultimate episode 19 ended with a scene that made us even more hopeful for Magnum and Higgins’ future. At the very least, we now know that both sides have feelings. but we haven’t reached the scene where the two are in each other’s arms. Juliet told her therapist in episode 19 that she can’t stop thinking about Magnum and that she regrets not saying yes when he asked her to spend time with him. What if he doesn’t ask you again? This scene does, at the very least, set the stage for her to confess something, which she appears to be doing in the trailer for the upcoming episode. We don’t know if there will be a fifth season yet! Even so, episode 19 has paved the way for a lot more. So, Will, there be a cliffhanger? We would not exclude that out, considering the show’s nature. We would not be shocked if it has to do with Magnum and Higgins’ mutual affection. we can hope for is that there will be some sort of resolution before the end of the episode.

Hernandez told tvline.com about any developments for Thomas and Juliet in an exclusive interview.  To some extent, it’s building up to something that’s going to happen in the season finale (airing May 6). We’ve teased this relationship dynamic for a while, and the audience wants to see what’s going to happen with that. So, we’re doing something with that in the finale that’s pretty interesting. But ultimately, at least in my mind, I don’t think they should be together So, here we can assume that there will be a cliffhanger, as a result, we will get a season 5.

Meanwhile, according to the Magnum PI season 4 finale episode synopsis, Rick and TC are dealing with some extremely serious issues. T.C. helps Rick when Suzy has significant pregnancy issues. Rick and Suzy have been through a lot this season, and we want them to be happy at the end of it. And The good news is this; Both have become new parents. You can see the finale photos and promo given below.

We're having a baby! 🍼 Ready or not, Rick's world is about to change. Tune in to the #MagnumPI season finale, TOMORROW. pic.twitter.com/imgzz6b52G

Magnum P.I. 2019 Season 4.20 Synopsis:–  A disoriented man hires Magnum and Higgins to investigate a crime he doesn’t remember after he woke up on the beach covered in blood. Also, T.C. is taken aback when Cade’s biological grandmother makes a surprise visit, and Rick’s feelings for Suzy grow stronger as they prepare for the birth of their first child.

“Hi, it’s Kumu. We only have 2 episodes left in this season. I know. Crazy. I have to go…gotta watch this one. It’s soooo good!” #mpi #magnumpicbs #magnumpiseason4 #kumu @ Honolulu, Hawaii https://t.co/N1t4F8qoUM

Two days later, a man who was drinking in a Wisconsin pub wakes up drenched in blood on a beach in Hawaii. Rick isn’t surprised when Thomas discloses to Rick that he has feelings for Higgins. Cade’s grandma has requested a meeting with Cade, according to Katsumoto. T.C. is adamant on meeting her first. The man from the beach, Greg Nettles, employs Magnum and Higgins to figure out what happened. When he awoke, he discovered a recently fired gun on him. Donna Jensen, Cade’s grandma, offers T.C. a hug. Trevor Lyttle, a convict, is responsible for the blood on Greg’s shirt. He recalls battling Lyttle and firing his weapon.

Juliet comes to Greg’s smashed rented car. Greg recalls that the accident occurred before his fight with Lyttle, and that the woman Angie was also in the vehicle. Greg was accustomed to retrieving items from a safe deposit box. Frank Medina is the owner of the box, and Greg is the intended recipient. Greg notices a photo of himself and his grandfather at Medina’s house, which he hasn’t seen in 20 years. Medina is discovered dead. Medina was behind a 20-year-old diamond robbery, which Katsumoto, Lia, Magnum, and Higgins piece together. Cade meets his grandmother for the first time. He dismisses her for not doing enough to assist his mother. Medina’s companion in the heist was Angie’s father. The diamond is missing from Angie and Lyttle’s possession. Greg is kidnapped from the hospital. Greg has stomach aches as a result of swallowing the diamond. Just in time, Katsumoto and Lia arrive to the motel to save Greg. Greg received a note from his grandfather in the safe-deposit box. Cade gets a plane ticket to visit his relatives in Tennessee, thanks to T.C. Juliet visits her therapist. She admits she can’t stop thinking about Magnum.