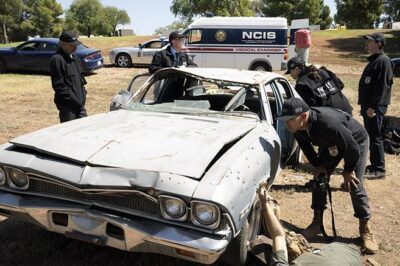 McGee’s mother-in-law took center stage on NCIS Season 19 Episode 7 after discovering a dead body on a cruise ship, but it was evident from the start that she cared more about maintaining secrets than the safety of people in her tight circle. Seriously, her house blew up, and someone tried to kill her, but she believed she could still go to a book club? What was going through the mind that made her think that was okay? Read Recap below. Read the recap below. What will take place next? To discover out, we’ll have to dig a little deeper. NCIS Season 19 Episode 8 (www.tvacute.com) has everything you need to know, including the promo and release date.

Following tonight’s repeat, CBS released a first peek at NCIS season 19 episode 8, “Peacekeeper,” and we now have a clearer idea of what to expect. with the image, This is where the murder victim was discovered, and the cause of death is obvious almost quickly how could it not be? The automobile was discovered outside of a gun range, but why was someone so desperate to get rid of so many bullets? It’s one of the first things that strikes me as odd about this story. We also get the impression that this episode will focus a lot on the topic of gun ownership in the United States, particularly when it comes to the over-the-top methods some gun manufacturers try to sell their products. We expect there will also be a focus on legal loopholes and the convoluted manner in which they are promoted.

NCIS  Episode 19.8 Synopsis: NCIS investigates the case of a Navy reservist whose body is found in a beat-up car at the end of a gun range. Also, Kasie weighs the pros and cons of buying a gun.

‘NCIS’ Season 19 episode 8 will air on CBS on November 29, 2021, at 9:00-10:00 PM, ET/PT. After airing on Tuesdays the previous season, the show will switch to Monday nights for the nineteenth season premiere. It will be available to watch online on CBS’ official website or Paramount+. You can also watch the upcoming episode on iTunes, Vudu, Google Play, YouTube, FuboTV, Amazon Prime (with a Paramount+ subscription), DirecTV, YouTube TV, Hulu + Live TV, Spectrum, and Xfinity’s VOD and Live-TV platforms.

Judy is aboard a cruise ship and has shown an interest in visiting the sauna. When she opens the door and no one is present, a dead body emerges. Judy was on a cruise and didn’t notify anyone, which surprises McGee. That did not set well with anybody else, particularly Delilah, who is grappling with her mother’s secret life. When her home is bombed and she is forced to live with them, it all comes to a head. Everyone tells her she doesn’t comprehend the gravity of her actions when she says she wants to start her reading club. When a package arrives, it appears that the man is attempting to remove a weapon. He is tackled by Parker and McGee. The man turns out to be Judy’s ex-fiance, and she kept it a secret from everyone. Judy discovers that the case is related to toxic waste, and that the brand of drink seen on the CCTV was not present aboard the ship. After considerable investigation, it was discovered that the corporation was dumping poisonous garbage onto the boat, which was then tossed into the water, and that Finch was to blame. Parker exposes the crew to an app that he hopes will help them bond, but it has the opposite effect.