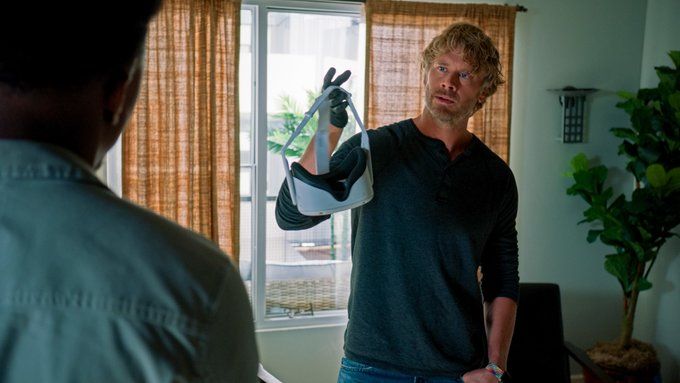 NCIS: Los Angeles show has a serious message regarding the treatment of veterans at its core. This message was more effective on NCIS LA Season 13 Episode 6 since it was incorporated in a hostage situation. It was easy to sympathize with Gary DeMayo, the gunman who kidnapped a few bus passengers. Following the suicide of his daughter Kara, a disgraced Marine, DeMayo was understandably in search of explanations, as none of the accusations leveled against her rang true to him. read the episode 6 recap below. Fans of NCIS: Los Angeles (NCIS: LA) have been eagerly anticipating what would happen next in the world of the Naval Criminal Investigative LA Service after the hiatus.  To discover out, we’ll have to dig a little deeper. (www.tvacute.com) Here’s all you need to know about Season 13 Episode 7 of NCIS: Los Angeles, including the trailer and release date.

The mid-season premiere, titled “Lost Soldier Down,” will follow Callen (played by Chris O’Donnell) and his squad as they investigate the apparent suicide of a Navy intelligence officer following a drug-fueled night. The CBS synopsis also hints at friction between Special Agent Kensi (Daniela Ruah) and NCIS Investigator Marty Deeks (Eric Christian Olsen). Episode 7 will also startup where the midseason finale left off, with Kensi and Deeks attending an adoption seminar. If their disagreement over the backyard does not negatively influence their relationship, the show’s favorite pair could be on their way to becoming babies very soon.

Daniela Ruah, who has been a member of the NCIS family since 2009, will also direct the midseason premiere.

Back-up is on it's way TONIGHT for an all-new episode of #NCISLA, directed by the one and only @danielaruah! We'll see you and the rest of the team there. pic.twitter.com/s3vV8naCOW

NCIS: Los Angeles Episode 13.7 Synopsis: NCIS investigates the apparent suicide of a Navy intelligence officer who leaped to his death after taking LSD. Also, while Kensi is away, Deeks makes plans to redo the backyard without her input.

Stay zen — we'll be back before you know it (January 2). #NCISLA pic.twitter.com/pHejHzHR65

NCIS: Los Angeles Season 13 Episode 7 will release on CBS on January 2, 2022, at 9:00-10:00 PM, ET/PT. It will be available to watch online on CBS’ official website or Paramount+. You can also watch the upcoming episode on iTunes, Vudu, Google Play, YouTube, FuboTV, Amazon Prime (with a Paramount+ subscription), DirecTV, YouTube TV, Hulu + Live TV, Spectrum, and Xfinity’s VOD and Live-TV platforms.

A bomb-wielding guy kidnaps a city bus and shoots an officer. Callen goes through Katya’s safe-deposit box to see what she has. Kensi attends a workshop on adoption preparation. The assailant is Gary DeMayo. He is adamant that his late daughter Kara be found not guilty of war crimes. Captain Maya Lopez of the Los Angeles Police Department greets Sam and Roundtree. After SWAT is called back, Sam requests to negotiate with DeMayo. DeMayo feels his daughter was murdered rather than committed suicide. DeMayo’s wife Rachel is being interrogated by Callen and Deeks. In return for the injured cop, Sam sends Roundtree disguised as a reporter. Rachel agrees to accompany Callen to the crime scene and speak with DeMayo. Kensi is being comforted by the adoption speaker. Kara’s notes contain the name, Lawrence Kerr. Kerr and Kara were both in Afghanistan at the same time. Roundtree sneaks a glance at his bomb while Rachel distracts DeMayo, but is discovered when SWAT approaches closer. DeMayo’s explosive has a chance of succeeding. When Callen and Deeks arrive to question Kerr, he tries to flee. Kara purchased the gun with which she was shot, indicating that her death was self-inflicted.

DeMayo receives the information from Sam. Kerr injected Kara with drugs so that he, his employer, and two other people could steal the seized weapons cache. Everyone is thrown off the bus by DeMayo. When he refuses to go, Roundtree tries to grab the detonator from him. A sharpshooter opens fire on the bus. The shooter is Kerr’s absent boss. With SWAT shields in hand, Sam dashes to the bus. Roundtree and DeMayo are covered by him, and they all manage to flee before the bomb goes off. On a rooftop, Callen takes down the boss. DeMayo has been apprehended. Sam informs DeMayo that the guns were stolen and sold by government contractors. Kensi and Deeks discuss the pros and cons of adoption and fostering. Kilbride is able to cleanse Kara’s name.