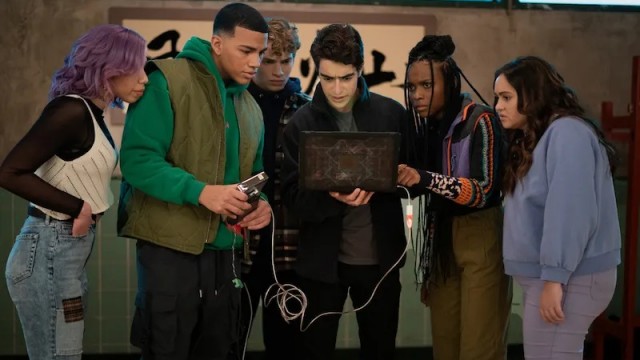 In episode 10 of The CW’s new superhero TV series, Naomi’s parents revealed their secrets to her. They told how they promised her parents they’d look after her if they died. Jennifer and Greg didn’t sure if her parents were living. But Brutus got them. Greg and Jennifer let their daughter choose between fleeing or fighting. Naomi is a fighter. She won’t leave. Especially with her prom coming up. Sure, a superhero prom has its share of hijinks. A forcefield surrounded the school, locking everyone in. Even Naomi’s powers couldn’t help. Julian, one of Brutus’ generals, greeted her and explained the situation. He let her choose between her best pals and fifty others. She protects everyone in usual heroic ways.  So, what’s next on the horizon? At www.tvacute.com, we have everything we know about Naomi’s Season 1 finale.

The superpowered teen from another planet (Kaci Walfall) has visions from her visit to Earth-29. She enlists the aid of her closest friends and family members in an epic battle against an alien power that has been seeking her since she was born. Only then will she be able to choose her own destiny. The conclusion will affect at least one person in Naomi’s life. Annabelle is a good guess. She’s been a great help. Naomi will have to dig deeper to win without Annabelle. Zumbado is the second choice.

Naomi Episode 12: Ready or Not: Synopsis

After having visions from her brief time on Earth-29, Naomi seeks the advice of her protectors – Dee, Zumbado, Greg, Jen and Akira – but no one can agree on a plan…and Naomi feels sidelined in decisions about her own future. After Naomi receives a special gift from Akira, she sets off on a road trip with Annabelle in search of a specific place from a new vision…but something is tracking them closely. Meanwhile, Anthony’s attempt to get Naomi’s attention by revisiting the “Superman stunt” results in an unlikely alliance with Lourdes…but danger looms the closer they get to the truth.

Naomi Episode 13: Ready or Not: Synopsis

Naomi must make a decision to protect those she loves most, but in the end, Naomi needs those closest to her to battle a powerful being that has been hunting her since birth. And while everyone has an opinion about what Naomi’s future should be, her greatest power will manifest only when she stops believing everything she once thought to be true…and chooses her own destiny.

Naomi Season 1 Episodes 12 and 13 will premiere on The CW on May  10, 2022, at 9 p.m. ET.” The show is also available to watch on The CW’s official website. Furthermore, the show is accessible to watch on Amazon Prime Video and iTunes. Meanwhile, in Australia, the show airs on Binge every Wednesday at 5 p.m. AEDT. in Canada watch it on Showcase.