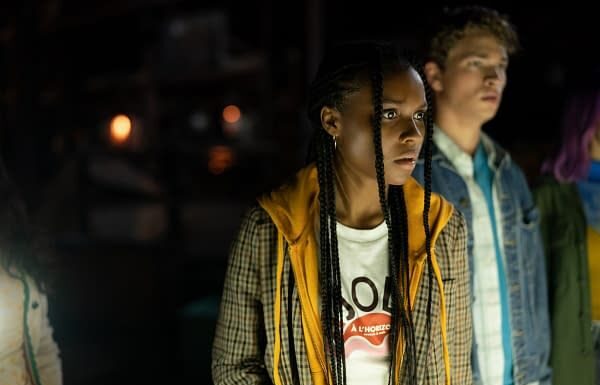 Naomi begins to feel the aftereffects of a weird encounter involving who may or may not be Superman in the first episode of Naomi Season 1. She goes out to find answers, but all she succeeds in doing is raising more questions. Continue reading the recap below.  Let’s move tonight’s episode.

The exclusive photos synopsis, director, and air date for The CW’s Naomi: Season 1, Episode 2: titled Unidentified Flying Object have been announced. Naomi episode 2 will premiere on Tuesday, January 18, 2022, at 9/8c. Naomi from The CW. The series is written and executive produced by DuVernay and Blankenship, and executive produced by Sarah Bremner and Paul Garnes of ARRAY Filmworks and is based on DC Comics characters.

SEARCHING FOR ANSWERS – Following a shocking revelation by Dee (Alexander Wraith), Naomi (Kaci Walfall) enlists her friends to dig deeper into the mystery surrounding unexplained occurrences in Port Oswego and whether they have anything to do with her past. Meanwhile, Naomi’s parents (Barry Watson and Mouzam Makkar) are caught off guard by Naomi’s interrogations. Another ominous encounter with Zumbado (Cranston Johnson) leaves Naomi shaken, and she seeks Dee’s help in taking the next step to embracing her destiny. Also starring Mary-Charles Jones, Daniel Puig, Camila Moreno, Will Meyers and Aidan Gemme. DeMane Davis directed the episode written by Jill Blankenship (#102). Original airdate 1/18/2022.

Naomi attends a party and demonstrates that she is well-liked by her classmates. She also operates the world’s number three Superman website. Naomi has a conversation with a man named Nathan, who reminds her that Superman isn’t real. Naomi, on the other hand, is unconcerned about it. She then goes to see Annabelle, a friend of hers. Naomi, 16, is the owner of a prominent Superman fansite. While preparing for an upcoming debate, she learns about a wild act taking place in Port Oswego’s town center. She hears a buzzing sound and passes out on her way to the plaza, but not before seeing a figure swoop through the sky. When she wakes up, she discovers she has missed a fight between Superman and another person, though the town believes it was a stunt.

Naomi goes around town asking people about the feat and gathering video footage from individuals who witnessed it. She asks her father if it had anything to do with the military, but he dismisses the possibility. Nathan, Naomi’s ex-boyfriend, compiles the event’s numerous tapes into a film, which she watches after spotting local tattoo artist Dee, who looks to know Superman. When Naomi and Nathan interrogate Dee, though, he gets evasive before admitting that he staged the hoax. Naomi hears buzzing and passes out on stage during a debate at the military installation. She later discovers that removing her spectacles allows her to see things more clearly, including a message conveyed to a military guy stating that there is evidence Superman was in a nearby forest.

Naomi ventures into the woods and discovers a disc. Zumbado, a local car salesperson who is notorious for not being a kind guy, approaches her. He demands the disc, and Naomi runs, scattering the leaves. Naomi enlists the help of her pals to break into the auto lot and look for the disc after Zumbado escapes with it. When Zumbado returns, they don’t find it before escaping, but Naomi finds an article about a flying object sighting near Port Oswego on the day she was adopted. Naomi approaches Dee after seeing a picture of him in the story, and he exposes his wings to her. She then inquires as to her identity.