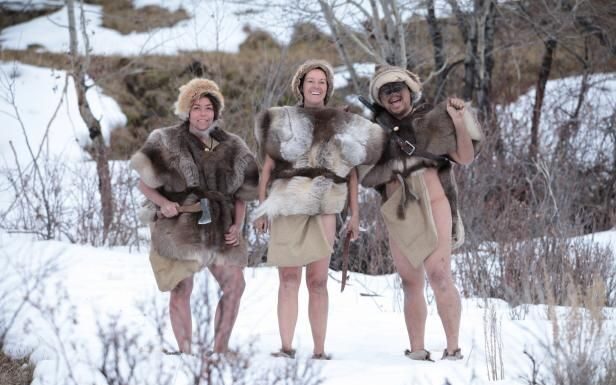 One of the most popular survival series on the channel is back with an all-star “Frozen” edition that will make you forget about the current heat wave. Four teams of three fan favorites including three from the current season of Naked and Afraid XL are dropped into the cold snowbanks without the usual basic supplies.

Naked and Afraid XL Season 9 Episode 1 Title “Rocked by the Rockies” follows Twelve elite survivalists take on their toughest location yet, the sub-freezing Rocky Mountains of Montana. To find scarce food in this frozen wilderness, the survivalists must compete with some of North America’s most deadly predators: mountain lions, wolves, and grizzly bear just emerging from hibernation for 14 days on NAKED AND AFRAID XL: Frozen.

These top survivalists will be put to the test like never before as they are dropped into one of the most punishing environments ever attempted: Montana’s windy and snow-covered Rocky Mountains. Only the most successful and memorable Naked and Afraid survivalists will have the knowledge, cooperation, and mental fortitude required for their survival mission.

The survivalists will enter the challenge in four different teams of three and will have only the most basic tools and raw materials necessary to survive in the frigid tundra. They will not have any shoes, clothing, food, or water. Although these survivalists are accustomed to the numerous risks associated with survival, this environment raises the stakes. The survivalists must outwit some of North America’s deadliest predators, including mountain lions, wolves, and grizzly bears who are just coming out of hibernation, in order to find the sparse food in this freezing wilderness.

In addition to three All-Stars from the current successful season of Naked and Afraid XL — Waz Addy, Trish Bulinsky, and Rod Biggs — “Naked and Afraid XL: Frozen will bring back some of the biggest fan favorites and most beloved survivalists from the Naked and Afraid franchise. These characters include Jake Nodar, Gabrielle Balassone, and Kenny Furneaux.

Below is a complete list of Naked and Afraid XL: Frozen survivalists.

According to a press release, “12 of Naked and Afraid’s most well-known and seasoned All-Stars take on 14 punishing days and nights in the frozen, ice-covered wilderness in the frigid Rocky Mountains, where sub-freezing temperatures, hypothermia, and frostbite are only a few of the immediate dangers at hand. These accomplished survivalists have faced down the venomous snakes of Southeast Asia, the bug-infested Amazon, and the sweltering heat of Africa. They must overcome the most challenging obstacles they’ve yet encountered in order to take the next step toward becoming franchise legends. Will they make it through this winter’s horde and survive, or will they fail the test and be frozen out?