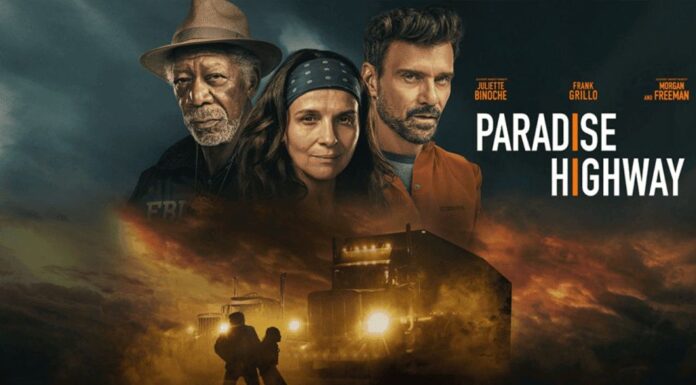 “Paradise Highway,” a Movie written and directed by Anna Gutto, shines a light on some extremely serious but gloomy subjects. The movie’s plot revolves around human trafficking, specifically among prepubescent females. In the criminal drama Movie, a lady named Sally (Academy-Award winner Juliette Binoche) is assigned the responsibility of delivering a parcel. She begins second-guessing her conduct when she realizes that the package contains a young girl Leila (Hala Finley) who is a victim of human trafficking. She and her brother Dennis (Frank Grillo) are now the targets of both the police and the traffickers, which is problematic for them both. Overall, this is a promising debut film. With such serious issues, it begs the question of how realistic the movie actually is. Is it inspired by actual events?

Is the story of Paradise Highway real?

No, “Paradise Highway” is not based on a true story; nonetheless, real-life events served as inspiration. Anna Gutto is the author of the original narrative. Before it was turned into a movie, she spent over a decade honing the concept that had first occurred to her as a teenager. “It came out that my friend’s building had formerly housed a brothel. It really astonished me, since this was a good part of town,” she remarked. She considered all the things that go unreported or how sometimes people want to ignore them when they are happening right next door.

The idea remained in her head as time went on, and Gutto also learned many more details about it, particularly the fact that domestic human trafficking also took place in these locations and that victims were not simply foreigners. She made the decision to bring up this issue and start a discussion about human trafficking and its effects on individuals. She began to think of a tale about a girl who escapes the setting as a result. “Often, these young ladies or guys have a very tough time leaving. Not because they are shackled, but rather due to a lack of resources inside themselves or even out of fear. Therefore, I wanted to develop a story about a character who had the potential to succeed,” stated Gutto.

Gutto was in close dialogue with different communities in order to tell this story about a trucker and a sex trafficked child, and the FBI agents pursuing them, as authentically as possible. “I feel like I’ve just been incredibly lucky on this film because I met all of these very, very generous people,” said Gutto. “So I have my FBI consultant who unfortunately has to stay anonymous because he’s still an active agent himself. He would see the work in progress in the edit, and I did the same with Desiree, my trucking consultant. She would read scripts, I would talk with her, I would ask her questions and the same thing with Juliette [Binoche]. Juliette and I went on ride-alongs with Desiree, learning how to drive the truck.”

By the time the concept had taken shape, she had some input from Paul Schrader that changed the course of the narrative. When Schrader gave Gutto a YouTube video on female truckers to see if there was a character there for her film, Gutto had already been thinking about utilizing truck stops as the setting for the plot. She did more study on the subject and spoke with the female truck drivers to learn about their personal journeys and daily lives on the road. She included some of the dialogue from these exchanges in the movie as well. She was greatly moved by their experiences and developed a great deal of respect for them, especially in light of the fact that they were dealing with their own personal struggles and traumas while working in a very male-dominated field in demanding conditions. With all of this in mind, it is reasonable to conclude that while “Paradise Highway” is a fictional story, it is not made up on the spot. The movie is very much based in reality thanks to all the research, the real-life characterizations, and the pertinent themes at its core, and it definitely succeeds in evoking strong emotions in the audience.