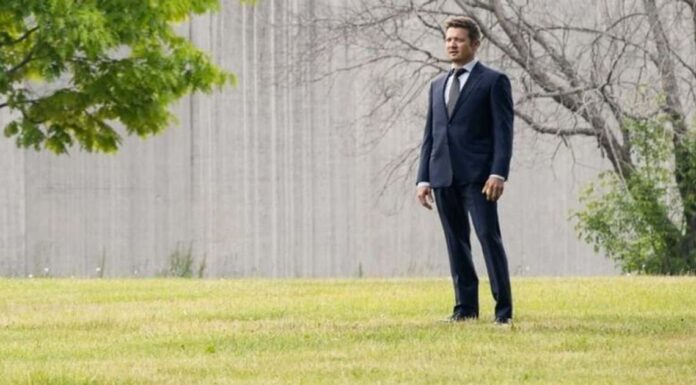 Mayor of Kingstown Episode 6 starts in the jail yard, where numerous groups assemble before a massive prison battle breaks out. In the midst of the chaos, one of the detainees gets stabbed by unknown inmates. When the prison guards put the whole building on lockdown, various gang leaders start pressuring Mike to remove the guards. Desperate to change the situation in prison, even Bunny loses it and threatens the Kingstown powerbroker with violence.

Is Iris Dead in Mayor of Kingstown 6?

When Milo asks to talk with Mike at the park, Mike agrees, only to discover that the inmate is tracking Iris via an implant. Mike returns to his workplace to find her missing and two FBI agents brutally slain. In the episode’s finale, we see the words “Every Feather” painted in blood on the office wall. Milo, meanwhile, orders Josef to beat up Iris. Mike finds Josef and beats him to a pulp when the battered young girl shows up at his office. Realizing Iris is in danger from Milo, the McLusky brother begs the FBI to place her in witness protection. But Iris can’t supply enough information to qualify for the program. Milo has apparently kidnapped Iris, revealing how he implants a tracking device in the abdomen of his employees. The criminal threatens to kill her, but not so soon. Milo is a calculated criminal, so he will likely take advantage of the McLusky brothers’ love for Iris.

What is “Every Feather”?

The phrase “Every Feather” also seems to imply a similar outcome, as Milo looks to be torturing Iris to death. The expression appears to refer to plucking every feather from a bird, indicating a lengthy plan. The term is also a jab to Mike, as Milo has stated publicly that he intends to torture the lady Mike loves on his wall (in blood!). Milo and Mike appear to have lost all pretense of civility, and the gloves are off.

Milo appears to be merely abducting Iris to enrage Mike. Milo has frequently tried to get the attention of the Kingstown powerbroker to discuss his losses, only to be ignored. Milo undoubtedly expected Mike to assault Josef, seeing retribution as proof he loves Iris. So he kidnaps Mike’s favorite girl to gain the prominent powerbroker’s complete attention. For criminals, being on Mike’s bad side seems to have dire consequences. The FBI agents Milo killed while kidnapping Iris will certainly lead to a large inquiry, which could strain Kingstown’s seedy underbelly.

Why is Bunny enraged?

Bunny is enraged because the inmate who is stabbed during the jail battle is a gang member. To make matters worse, the watchtower guard who is supposed to shoot the attackers accidentally shoots the victim. Bunny believes the inmates and guards are conspiring against his guys. Worse, the prison guards have thrown several of Bunny’s top gang members in solitary. Bunny is enraged and asks that Mike speaks to the jail guards to lift the lockdown. Mike doesn’t seem to take the threat seriously. But things are tense right now, and Bunny or one of the other gang leaders may soon breach a line that Mike has told them not to cross.