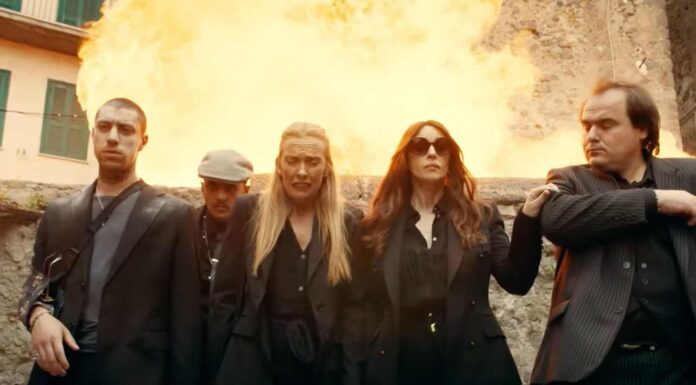 Due to the genre’s appeal, mafia film parodies have been plentiful. Many of these films and series present a unique take on organized crime life. Now this time, Mafia Mamma, a dark comedy from Bleecker Street, parodies gangster life. Here is everything we (tvacute.com) currently know about Mafia Mamma, including information about the cast, storyline, trailer, and other aspects of the most recent mafia comedy.

there are rumors that the film will debut on April 14, 2023, but Bleecker Street hasn’t formally confirmed this. Mafia Mamma will probably make its debut sometime in 2023. There are currently no known plans for streaming or VOD distribution. It is said in the trailer description that Mafia Mamma will be seen in theaters.

Who Plays the in Mafia Mamma Movie?

What’s the Story Behind Mafia Mama?

In Catherine Hardwick‘s Mafia Mamma, Toni Collette plays a lonely suburbanite who inadvertently enters the criminal world. Collette’s character travels to rural Italy to become the next leader of one of the country’s most dreaded crime families, a job she can hardly comprehend since she’s never been to Europe and most of her mafia expertise comes from the shows and movies listed above. She’ll need to learn fast if she wants to be the “Mafia Mamma” her classmates want her to be.

The following is the Mafia Mamma official plot summary: “The film is a hilarious, action-packed comedy about a suburban American woman who inherits her grandfather’s Mafia empire and, guided by the Firm’s trusted consigliere, defies everyone’s expectations, including her own, as the new head of the family business.”

For Mafia Mamma, Bleecker Street has released the official trailer. The woman in the film travels to Rome for her estranged grandfather’s burial, who turns out to be an Italian criminal. There, she learns that her grandfather’s final request was for her to run his criminal business. Her life abruptly changes as a result, and hitmen attempt to kill her on a regular basis. The Mafia Mamma title card that appears at the end of the trailer is obviously eerily similar to The Godfather’s logo (1972).

Catherine Hardwicke is the film’s director, and J. Michael Feldman and Debbie Jhoon wrote the screenplay. Hardwicke and Collette previously collaborated on the 2015 comedy-drama film Miss You Already, and this project marks their reunion. Produced by Collette, Amanda Sthers, and Christopher Simon, Mafia Mamma. It is produced by New Sparta, IDEA (L), and Vocab Films.