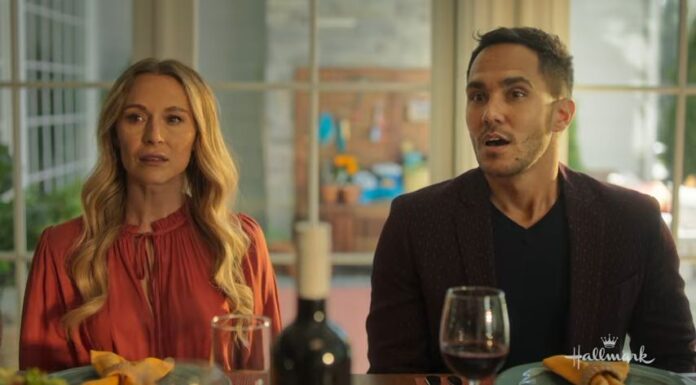 Alexa Penavega And Carlos Penavega, Real-life Husband And Wife, “Love In The Limelight,” A New, Original Movie Debuting In August On Hallmark Channel.

The original romantic film follows a teenage crush Nick, the former lead singer of the well-known boy band The Mendez Boyz, who visits the town for a return concert, and the two finally meet in person. Their friendship has paved the way for romance, and Summer’s hip grandmother with a burgeoning TikTok following, Abuelita, urges her to follow her heart.

Is Love in the Limelight based on True Story?

Yeah! Love in the Limelight  Movie is based on their real-life love story. The script was created by Willie Aames, Winnie Hung, and Rich Tabach.  Aames is known for his work on “Picture Perfect Mysteries: Exit Stage Death” and “Eight is Enough.”

Love in the Limelight 2022 Cast

Ivonne Coll Mendoza is a Puerto Rican actress who was born on June 18, 1947. In 1967, she held the title of Miss Puerto Rico and participated in the Miss Universe competition. Later, she pursued acting and had appearances in movies like The Godfather Part II and Lean on Me as well as television shows like Switched at Birth, Glee, and Teen Wolf. She is childless and has never been married.

Coll played Alba Villanueva in the CW comedy-drama series Jane the Virgin from 2014 until 2019. The National Puerto Rican Day Parade organizers presented Coll with a lifetime achievement award in 2015 in recognition of her extensive and diversified career.

Carlos Roberto PenaVega, an American actor and musician, was born on August 15, 1989. He is a member of the Big Time Rush group and played Carlos Garca in the Nickelodeon sitcom Big Time Rush. Additionally, he presided over the network game show Webheads. Bobby Santiago’s current voice actor in The Loud House and its spinoff, The Casagrande’s. After meeting at a Bible study, PenaVega proposed to actress Alexa Vega in August 2013. The ceremony took place on January 4, 2014. They both have the LexLovesLos YouTube channel. The couple welcomed their first child on December 7, 2016. On June 30, 2019, their second son was born. They welcomed a daughter on May 7, 2021.

Alexa Ellese PenaVega is an American actress and singer who was born on August 27, 1988. She is known for playing Carmen Cortez in the Spy Kids movie series and Julie Corky in the 2004 movie Sleepover. She played the lead role of Ruby Gallagher on the ABC Family show Ruby & the Rockits in 2009. On October 10, 2010, Vega married Sean Covel. In July 2012, Vega said on Twitter that she and Covel were no longer together. In August 2013, Vega got engaged to Carlos Pena Jr., a singer, and actor who used to be in the band Big Time Rush. They had been dating since late 2012. On January 4, 2014, the couple got married in Puerto Vallarta, Mexico. Their new last name is PenaVega. The couple has three children.

Actor Chase Ramsey hails from New York City. Known for her roles in The Storied Life of AJ Fikry, Sweet Pecan Summer for Hallmark, Falling for Christmas for Netflix, and The Book of Mormon Musical on Broadway as Elder Cunningham. California Dream Eater on Dream365 TV was hosted by Chase, who is also a host on Sundance TV and Food Network. He has served as a Walt Disney Company director in the past. As an actor and director, Chase has performed on stages and in films all around the country.

Love in the Limelight Synopsis from Crown Media

As a teenager, Summer (Alexa PenaVega) was a devoted fan of the popular boy band the Mendez Boyz, especially Nick (Carlos PenaVega), their lead singer. After receiving a sweet fan letter from Summer, Nick decides to respond with a phone call, sparking the start of a friendship that’s lasted to this day. When Nick’s manager books a gig for him at a small venue in Summer’s hometown of Salt Lake City where she now works in human resources at a local university, the two finally meet face-to-face. It’s clear their friendship has set the stage for romance,. Summer breaks things and Summer’s Abuelita (Ivonne Coll, “Jane the Virgin”) – a hip grandma with a TikTok following – encourages her to follow her heart.

Love in the Limelight Trailer

“Love in the Limelight”  Soundtrack

Six original songs written by Carlos PenaVega are featured in this movie, which is a component of the network’s yearly “Fall into Love” programming event. PenaVega is now touring the country with the well-known band Big Time Rush.

Who is behind the “Love in the Limelight” Movie

Crown Media Productions, LLC is the author of “Love in the Limelight.” David Wulf is a producer while James Wilberger is the executive producer. Willie Aames, Winnie Hung, and Rich Tabach wrote the script, which was based on actual events and directed by Ron Oliver.