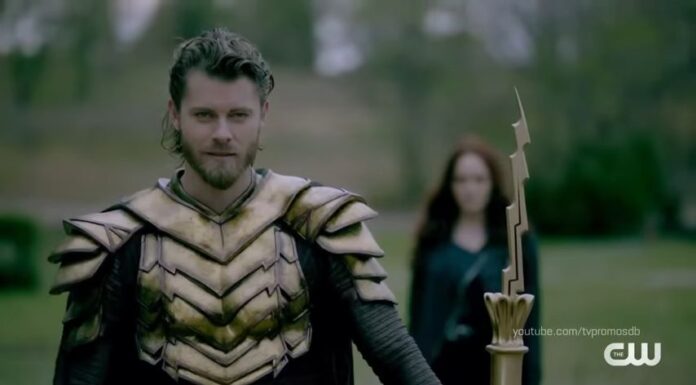 Legacies Season 4 Episode 19 will release on The CW on June 9, 2022. we will see an extremely emotional episode filled with a lot.

The CW’s Legacies season 4 delivered another emotional punch in episode 19.  Ken’s ultimate goal is already known: to destroy Hope at all costs. Ken has Kaleb and will kill him if Cleo doesn’t get the tribrid. She tearfully lets Kaleb die. Lizzie tells MG she loves him back. Aurora has a heart-to-heart with Jen and she learns that Ken is a bad person. Landon meets the Ferryman, aka Lynn, aka Ken’s sister. (Read the recap below) So what will happen next? You’ve found the best spot to acquire the Legacies Season 4 Episode 19 synopsis and new promo at www.tvacute.com.

Legacies Season 4 Episode 20: Klaus will appear in the series finale

The title of Legacies season 4 episode 19 is “This Can Only End in Blood.” it will certainly be a key story. After all, this is the penultimate one. it will be a huge, emotional time. there’s been a lot of speculation about Klaus reappearing in that. Legacies is doing everything they can to push those limits. In this episode, we will see Hope and Kane face off again. But this time Hope presents a challenge to Kane. Cleo is also ready to take revenge after the events of the last episode. How did you feel about Kaleb’s death? Is Lizzie the next to go? Lizzie appears to be doomed to die by the conclusion of the series,  The Super Squad is getting ready for the most important fight of their lives. While everything is going on, Landon receives some unanticipated guests. In fact, the show is shaping up to be a spectacular final chapter. Watch the new promo below.

Legacies Episode 4.19 Synopsis: –“This Can Only End in Blood” Season 4 Episode 19 Promo – TRUST YOUR INSTINCTS – Hope (Danielle Rose Russell) presents a challenge to Ken (guest star Luke Mitchell), which he has to accept. Cleo (Omono Okojie) is set on revenge. The Super Squad prepares for the battle of their lives. Meanwhile, Landon (Aria Shaghasemi) has some unexpected visitors. The episode was written by Benjamin Raab & Deric A. Hughes and directed by Jeffrey Hunt

Where to Watch Legacies Season 4 Episode 19?

Legacies Season 4 Episode 19 will release exclusively on The CW.  on June 9, 2022, at 9/8c. Season 4 will air weekly on Thursdays, with each episode lasting approximately 45 minutes. Those without cable can watch it on Fubo TV, YouTube TV, Hulu+Live TV, DirecTV, and Xfinity. You can also buy episodes on iTunes, Amazon, Vudu, Google Play, and Microsoft Store. You can catch up on previous seasons on Netflix.

Cleo utilized her prophetic skills to spy on Ken, unaware that she was also forging a relationship between herself and the wrath god Tomorrow Person. Ken took advantage of this by enticing Kaleb in and threatening Cleo with a staked Kaleb if she didn’t hand over Hope. While there’s no certainty that Kaleb will stay dead, considering some of this week’s other events, his death was nevertheless heartbreaking to witness. Continue reading for this week’s other important events, including some possible goodbyes. By the end of it, Kaleb might not be the only key figure who has been sacrificed. While Alaric was ready to play martyr in the Super Squad’s big plan to stop Ken, Vardemus’ magical probability device pointed to Lizzie as the best alternative. She not only has the ability to syphon Ken’s magic at a key point, but she also has the best chance of surviving the blast as a heretic. Lizzie was all in after talking with Caroline and Josie. “You have too much of your mother in you Alaric informed Lizzie.

Cleo’s otherwise dismal excursion into Ken’s mind had one bright lining: he informed her that she was now a fury, a natural metamorphosis that occurs when an oracle interferes with their visions and alters the future. Ken killed the other furies once they stopped being “collaborative,” hence she is the last of the furies.   Ethan said his final farewell to Mystic Falls this week, if he doesn’t return at the eleventh hour to detonate the explosion himself . MG utilized the therapy box to help Ethan recognize that he can’t help himself from wanting to be a hero, and that since using his powers will almost certainly result in death, he’s best off keeping his distance from the Salvatore School. MG and Ethan said their goodbyes at the bus stop. “Just to be clear, you’re one of the best guys I’ve ever known,” he told his vampire companion after encouraging him to tell Lizzie how he feels. Ken’s younger sibling! Not only that, but she isn’t the skeletal monster we’ve come to know and love. That’s more of a metaphor for how soulless she’s become in her 10,000 years on the job (“give or take”). She used to reside in Valhalla with the other gods, but Ken exiled her after she took pity on an innocent mother and child who perished in one of Ken’s wasteful wars and quietly shepherded them to Valhalla.

Ken’s sister did more than just tell Landon about her family history. She also made him an offer of employment. Her job, to be precise. “You remind me of who I used to be,” she said after adding that if she finds someone to take her place for the proper reasons, she can return to Valhalla. She’s become cynical after ten millennia in the soul business, which is why she created the coins in an attempt to quantify a person’s merit. “The world needs individuals like you,” she informed him, “who will find a new, better way to do things.” And he said yes! Landon’s first act as the new “Ferryman…woman…person?” was to fulfil a commitment to an old friend. Landon reincarnated the Necromancer as Ted in order to transfer him to the correct afterlife. Landon explained, “The Necromancer can’t dwell in Peace; he doesn’t belong there.”

Jed was hesitant to accept Ben’s assistance in the impending struggle because he still resented him for trying to force Ken to remove his werewolf curse. But, owing in part to a word from Finch, he changed his mind. Jed invited Ben to stay with him for the night after the gang’s victory party while he transformed under the full moon. “Being a wolf, that’s part of who I am,” Jed explained. I’d like you to accept that side of me as well.” Ben answered, Is it possible for me to attend as well? Then they kissed. Let’s attempt to end on a positive note. Lizzie and MG exchanged kisses! They almost kissed, so that’s fine. Cleo interrupting them with the news of Kaleb’s murder prevented them from kissing, but we did get a lovely confession from Lizzie before everything went wrong.