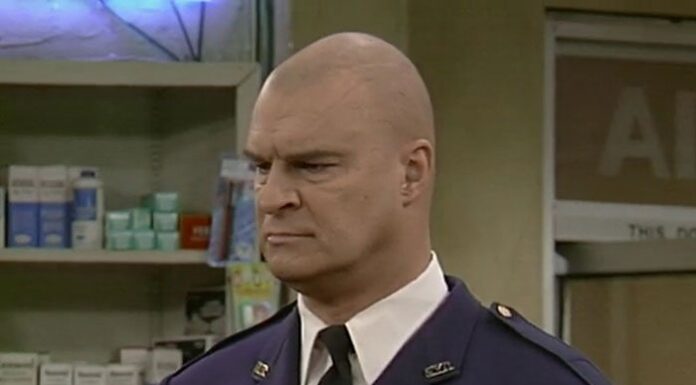 NBC has decided to bring back a courtroom comedy “Night Court” that originally aired between 1984 and 1992. Melissa Rauch, of The Big Bang Theory fame, continues the character of Abby Stone, Harry Stone’s (the late Harry Anderson) daughter, in the show.  John Larroquette, winner of four Emmys for his portrayal as prosecutor turned public defense, Dan Fielding. Although the courtroom setting is the same, many of the familiar faces are no longer there. Numerous original “Night Court” cast members have passed away, including Markie Post (public defender Christine Sullivan) in 2021 and Harry Anderson (Judge Harry T. Stone), who passed away in 2018 but will always be remembered by fans as the magician).

There are just two remaining members of the original cast, Marsha Warfield and Richard Moll.  Richard’s portrayal of Nostradamus “Bull” Shannon the bailiff in the first season of Night Court caused many viewers to develop romantic feelings for him. Bull, a kind giant has been a fan favorite for a very long time; hence, it is natural for viewers to hope that the character will return. You have come to the right place at tvacute.com to get answers to all these.

No, Richard Moll in the new Night Court. In the original show, Richard Moll‘s character, Nostradamus “Bull” Shannon, the role for which he is most known. he is one of the judicial bailiffs and comes out as being dumb. Bull is remembered by fans of the program for his catchphrase “Ohh-kay” and his forehead-slapping reaction to mistakes. He looks like a big, dumb hulk, but he was actually kind, gentle, and like a child. Even though he was portrayed as dull and stupid, it turns out that he was actually very smart and had an IQ of 181. his intelligence was found in season five. He looked out for Harry very carefully.  Richard Moll was in a sci-fi movie called “Metalstorm,” for which he had to shave his head. The producers liked the way Moll looked, so he kept his head shaved for the whole run of the show.

Will Richard Moll be in Night Court?

In an interview with USA TODAY, Larroquette discussed, he spoke with Marsha. It’s no secret that we might see a couple of elderly individuals appear as guests he hinted. “But there was a cavalcade of great comedic actors just starting out their careers coming through those court doors, Stephen Root, Brent Spiner, and Michael J. Fox. Who knows what the future will hold?'”

The 6-foot-8-inch tall towering actor has lent his distinctive gravelly voice to a number of video game and comic book projects and has starred in horror movies including Ghost Shark and Slay Belles. Moll appeared in guest-starring parts in TV series like Smallville, Cold Case, and Anger Management earlier in the new millennium.  Given that Richard Moll is still working. Moll is not currently scheduled to play Bull again, but fans will just have to stay tuned to find out whether or not their favorite bailiff from Night Court will be making a comeback.