Is Miranda Rae Mayo leaving Chicago Fire? Is Stella Kidd dead or alive? What happened to her? 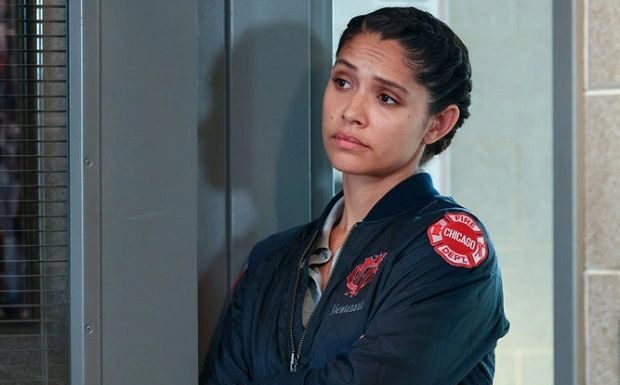 An incident involving Sam Carver (Jake Lockett) and a municipal worker during a rescue call on the Chicago Fire Season 11 Episode 9 fall finale prompted an IAD investigation. Who entered Firehouse 51 earlier in the hour to interview Carver, however, was much more surprising than the explosive that exploded at the end of the episode, putting Carver and Stella’s lives in danger: It was Emma, Violet’s disgraced former paramedic partner who is currently employed by IAD and is portrayed by Caitlin Carver. Stella Kidd’s  (Miranda Rae Mayo) devoted fans are likely anxious about her well-being because the episode leaves off on a shocking cliffhanger, which raises questions about her future. Is it possible that Miranda Rae Mayo may leave Chicago Fire after the fall finale? After what you witnessed earlier tonight, it is reasonable for you to wonder that. Now, let tvacute.com fill you in on all you need to know about that topic!

What happened to Stella Kidd And Carver?

At the end of Chicago Fire Season 11 Episode 8, Severide discovered that Det. Pryma (Troy Winbush) intended to include him in the investigation because he wanted to work out a deal with the corrupt officials who had betrayed him and Kidd. That agreement needed to be approved by the victims before Pryma could proceed. He, therefore, required Severide’s assistance. Severide acknowledged this as well, and he expelled Pryma from his residence since he was never going to approve a settlement that would let Kavanaugh get away with it. In Episode 9,  Detective Pryma tracks out the source of illegal guns in Chicago to stop the flow. He realizes Martucci is the crook behind the illegal firearms. Pryma aims to fight Martucci’s gang using Kavanaugh’s information. Stella Kidd and her staff arrive to treat injuries. Pryma and other officers catch Martucci, but a bomb wounds the detective’s leg.

On that note, it's a wrap on tonight's #ChicagoFire! #OneChicago pic.twitter.com/kff2C2ppQU

In order to provide Pryma with medical attention, Kidd and Sam Carver don protective gear and enter the residence where she is located. Kidd and Carver provide medical care for Pryma, who is struggling to fend off death while receiving treatment. Meanwhile, the officer dismantles the components of the bomb one at a time. The bomb specialist is successful in removing each component of the bomb, but the device still detonates before he can entirely diffuse it. The officer yells at Kidd and Carver, instructing them to use a table as a shield and protect Pryma from the bomb, which detonates in a short amount of time.

Is Stella Kidd dead or alive in Chicago Fire Season 11?

It also appears strange that the bomb squad was unable to deactivate the grenade prior to Kidd and Sam Carver entering the area. Overall, it seems like a huge risk to take. Kidd offered to take the risk, and it was typical of her to take the heroic role and put her life in danger. Carver’s company felt appropriate, too, especially in light of their growing loyalty and regard for one another. It was fairly severe there when they attempted to remove the grenade from Pryma’s leg, and it didn’t seem reasonable to instruct him to “remain still” while he was in such agony. Although it appears that Carver and Kidd took cover before the grenade detonated and one can only hope they were unharmed as a result, one can never be too sure with this series. Kidd, on the other hand, must have been able to escape the explosion and is almost certainly still alive.

In light of the aforementioned, it is reasonable to assume that the explosion left Kidd with serious wounds. Taking into account that Carver must have made every effort to save his lieutenant, it’s possible that we don’t need to worry about what will happen to Kidd for the time being. It’s possible that Carver prioritized safeguarding Kidd in order to repay the favor she’s done for him by constantly looking out for him and attempting to steer him in the right direction, even while his career was in jeopardy. It’s feasible that the two people Carver was most antagonistic with might lay the stage for his demise or departure, despite the fact that he has managed to change, win over people, Carver out a position for himself at 51. If Pryma passes away, the Martucci fiasco will come to a close, and we can go on.

Is it true that Miranda Rae Mayo leaving Chicago Fire?

The creative heads behind ‘Chicago Fire’ have never been hesitant when it came to killing off a character because they want to ensure that the story and character arcs are properly served. The audience members’ concerns regarding Miranda Rae Mayo’s position in the show are understandable. However, neither NBC nor Mayo has issued a statement regarding the rumored departure of the actress from the action drama. The explosion development may even be a part of the same storyline, especially when considering the possibility that Carver will save Stella kidd from the explosion. This is due to the fact that the bond that Stella Kidd and Sam Carver have formed has become an essential component of the main storyline of the season.

Let’s just get this out in the open: it would be a complete and utter tragedy if it turned out that this was the end of the line for Mayo, especially considering that Kidd and Severide just got married not too long ago. Their partnership is really starting to take off now! In addition to that, there have been too many female characters eliminated from One Chicago during the course of the series. The fact that Kidd is featured prominently within the key art displayed above gives us additional reason to believe that she will continue to be a part of the team.

According to TVLine, in response to a question from a viewer, “Stellaride loves each other with everything they’ve got, and support each other through thick and thin,” co-showrunner Andrea Newman noted. “But… there will be a few big wrenches thrown their way as the season progresses, so we’ll have to see how they handle those.”The fallout is profound, and it’s profound for Severide, as well as for Kidd and Carver. We explore it for a while, the aftershocks of the incident and all the relationships between Carver and Kidd, and Severide and Kidd. Everything gets a little shake-up coming out of that.

Sam Carver has already gone through a tremendously fascinating journey during this season. Even though they had a tumultuous history together in the beginning, Kidd is now able to put a lot of her faith in him as a friend and confidant.   In the following episodes of the show, we will be able to look forward to watching how Stella Kidd will handle these problems while still serving as the lieutenant in charge of her squad.