HOTD: Does Rhaenyra become queen in the end? 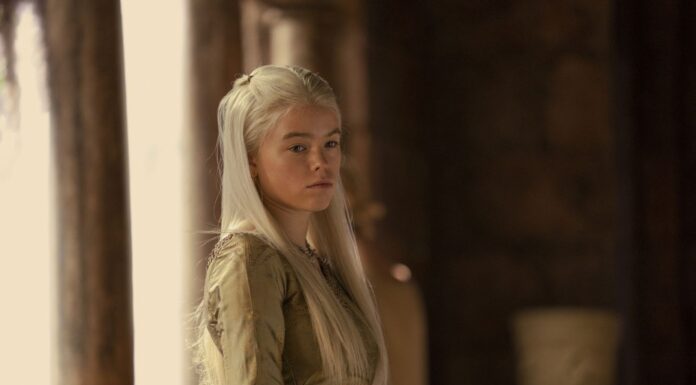 House of Dragon explores this horrific phenomenon through Targaryen princess Rhaenyra (Milly Alcock). At the end of Episode 1, the princess was courting Westeros’ major houses after her father, King Viserys I (Paddy Considine), named her successor to the Iron Throne. Rhaenyra’s predicted ascension hasn’t happened in two episodes. Fans wonder if Rhaenyra will become queen. Despite both the political and physical aspects, the Iron Throne is Westeros’ most coveted seat. Here’s tvacute.com explaining everything.

House of the Dragon has only hinted at Rhaenyra’s future when she saw the white stag in Episode 3. Fans can learn about the princess’ fate in George R. R. Martin’s Fire & Blood, which may remind readers of Daenerys’ voyage in GOT. Viserys I makes repeated attempts to find his daughter Rhaenyra a mate until Rhaenyra decides to marry Laenor Velaryon, son of Corlys Velaryon. Jacaerys, Lucerys, and Joffrey were their offspring. According to rumor, her biological father is Kingsguard knight Ser Harwin Strong (Ryan Corr) who appeared in the third episode of HOTD. Rhaenyra marries Daemon after Laenor’s death. Rhaenyra and Daemon (Matt Smith) live in Dragonstone and have Aegon III and Viserys II. Rhaenyra is still considered the heir until Viserys I dies, and Otto and Ser Criston Cole wanted to crown Alicent’s son Aegon II. Rhaenyra isn’t told of the king’s death so Aegon II can be crowned first. Rhaenyra refuses to acknowledge her half-brother as king, sparking “The Dance of Dragons” civil war.

Does Rhaenyra become queen in the end?

Rhaenyra is pregnant at this time, and she falls into a profound rage that endangers her unborn child’s life and Rhaenyra’s own pregnancy. Further enraged, Rhaenyra conducts a crowning of her own, to which her supporters come, in an effort to uphold Viserys I’s succession decrees. Aegon II is severely insulted when those followers bring the previous crown of her father, King Jaehaerys I. She also rejects a proposal that she give up her right to the throne in exchange for being given control over Dragonstone. Rhaenyra starts enlisting the help of powerful families like the Arryns, Starks, and Baratheons for her cause. After some time, she attacks King’s Landing. Despite Aegon II and Alicent’s attempts to launch a fight, Rhaenyra and Daemon are simply too strong. Additionally, the City Watch turns against Alicent and pledges allegiance to the former leader of the group, Daemon.

King’s Landing is destroyed in a matter of hours. In the aftermath, Alicent and her daughter, Helaena Targaryen, are held captives, Otto is executed for treason, and Aegon II is able to flee with the aid of his Kingsguard. Rhaenyra attempts to sit on the Iron Throne during her re-coronation, but while she does so, she receives a number of severe cuts and scratches, which are interpreted as a rejection by the throne. Due to their dislike of Aegon II, the citizens of King’s Landing first accept Rhaenyra’s successful campaign. Rhaenyra, however, becomes harsher with time, increasing taxes and conducting executions every day. She eventually comes to be seen as a female counterpart of “Maegor the Cruel,” her progenitor king. The third-youngest son of Alicent and Viserys, Prince Aemond, and Prince Daeron are targeted by the new queen after they stole her birthright and murdered her sons during the civil war.

How Long Has Rhaenyra Been queen?

Rhaenyra would rule as queen for only six months, and each time she sat on the throne, she would continue to be stained with blood. While the fight was still going on, Rhaenyra began to lose favor with important allies. When the well-liked Helaena Targaryen commits suicide after being held captive, her rule is overthrown. Many people in the capital riot after hearing of her passing because they think Rhaenyra ordered it. The dragon pits are stormed by rioters, which results in Joffrey, Rhaenyra’s son, dying. Overrun and determined to find Aegon II, Rhaenyra departs King’s Landing.

After a number of years pass, she asks Alfred Broome, one of the most seasoned knights, for assistance. Ser Robert Quince was chosen as the castellan of Dragonstone after she took control of King’s Landing rather than the now-disregarded Alfred. Alfred cheats Rhaenyra by telling Aegon II to ambush her as she travels to Dragonstone. After defeating Rhaenyra, Aegon II would feed his half-sister to his dragon, Sunfyre, in front of her son, Aegon III, before pronouncing that Rhaenyra was never the rightful monarch. Interestingly, Rhaenyra’s child would become King Aegon III after her younger brother.