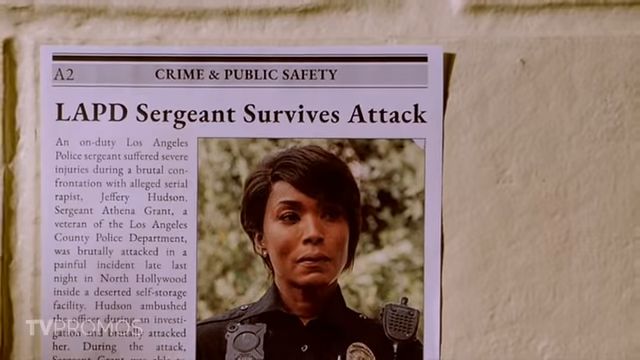 In the previous episode 2 of 9-1-1 as serial rapist Jeffrey Hudson escapes due to ransomware. the aircraft crashes, saving Bobby and the heart. Athena (Angela Bassett) visits Lou in the hospital. Meanwhile, Maddie (Jennifer Love Hewitt) battled postpartum depression. It was obvious she was struggling, not only with daily life but even picking up the phone. She certainly needed help,  They found Lila dead. Athena catches Michael. On the street, Jeffrey Hudson is halted by a roadblock but is permitted because he has a badge. Next week’s episode 3 titled “Desperate Measures” will include Hewitt again. Also, the blackout tale will continue. While it would be good if things got better for her soon, it’s likely to get worse first. Maddie has to make a difficult choice for herself. Athena will be in a terrible situation as she has protected those she loves. We expect a few huge stories to be resolved in this episode. www.tvacute.com brings you a promo of 911 Season 5 Episode 3 which you can watch below. So that you can prepare yourself for the upcoming new episode.

911 Episode 503 Synopsis: As the citywide blackout continues to cause mayhem in Los Angeles, Athena races to save her family from a tragedy. Meanwhile, Eddie must make a difficult choice about his future and Maddie makes a life-changing decision.

9-1-1 season 5 premieres on October 4, 2021, at 8:00-9:00 PM ET/PT on Fox. Every Monday, the network will screen new 43-minute episodes of the show. 9-1-1 Season 5 Episode 3 Online Streaming options – You can also watch the season premiere on Fox’s official website or the Fox Now app after it airs on TV. The latest episodes of ‘9-1-1′ are available on Google Play, YouTubeTV, SlingTV, Fubo TV, DirecTV, iTunes, Amazon Prime Video, YouTube, Vudu, Hulu Live TV, Xfinity, and Spectrum.

9-1-1 begins tonight as serial rapist Jeffrey Hudson escapes due to ransomware. As the emergency chopper prepares to descend on the roof with an organ for transplant, the city becomes dark. Henrietta “Hen” Wilson (Aisha Hinds) hops inside the chopper. Manny is told to flip the board by Chimney (Kenneth Choi). But before they can get him out, he begs for the transplanted heart. Bobby looks down, and the crew tries to stabilize the chopper so he can discover the heart; however, the cable gives way, and the aircraft crashes, saving Bobby and the heart. ….

Los Angeles is in the midst of a power outage and a record heatwave four days later. While Michael entertains guests at Athena’s, Athena discovers that Ransome is still alive in the hospital. The 118 is at the firehouse with all shifts, and Ana and Christopher stop by with food, which leads to an unusual incident that Buck sees. When the SWAT team discovers Hudson has not returned to the prison, they proceed to Lila’s house and discover she has died. The 118 is dispatched to downtown LA, where animals from the Los Angeles Zoo have escaped. They come across a man who has a broken leg, and Bobby and Athena return to his store to help a man who has been mauled by an alpaca. A 12-year-old boy passes away, prompting his mother to dial 911. May devises a scheme for his neighbors to connect extension cords to the ventilator from one of the houses with power.

Chimney tells Hen about Maddie’s postpartum depression, while Eddie tells Buck about his panic attack about Ana and their relationship. Later, as Jee-Yun is in the bathtub, Maddie drifts off for a while and falls under the water. When Athena is called to the hospital where Ransome is awake, she is stalking out one of Hudson’s victims, waiting for him to make a move. He tells her that she, too, is a victim of Hudson. Hudson is seen playing a game with Harry at Athena’s house. Bobby and Athena rush home, only to discover Harry has vanished. Hudson has Athena’s insignia and Harry is in a car trunk.