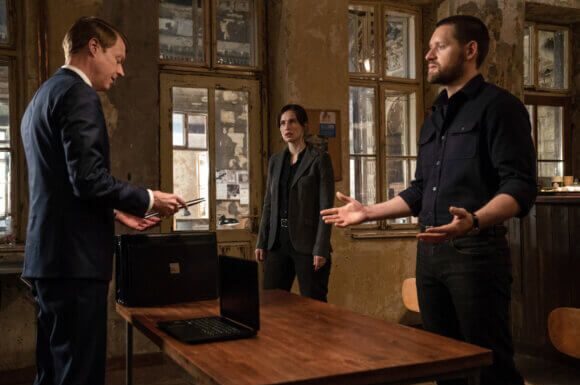 In the previous episode of the FBI: International A guy and a lady were walking on the Liberty Bridge in Budapest when the man began to feel funny and suspected that something had been placed in his drink. As a result, he attempted to alert his employer, the United States Attorney General. However, the woman with him snatched his phone and flung him into the river below the bridge. Scott briefed the crew the next day on the fresh case at hand.  Read the episode 14 recap below of FBI:   As a result, you’ll be able to mentally prepare yourself for the next episode.  www.tvacute.com has details for FBI: International Season 1 Episode 15 below.

the new episode title is “Shouldn’t Have Left Her.” In this episode, Raines goes off the rails to find his sister, while Kellett and Forrester face scrutiny.It was evident when we met Raines’ sister while she was backpacking around Europe. Jordan has vanished, and Raines is prepared to go to any length to locate her. However, he may lose his job as a result of this. It’s hardly shocking that he’s going off the rails to find his sister.  Directed by Michael Katleman and written by Derek Haas.

FBI: International Episode 15 Synopsis:  When Raines’ sister goes missing in Kosovo, he goes rogue to find her, putting his job and his life on the line; Kellett and Forrester face further scrutiny from inside the bureau.

A guy and a lady were walking on the Liberty Bridge in Budapest when the man began to feel funny and suspected that something had been placed in his drink. As a result, he attempted to alert his employer, the United States Attorney General. However, the woman with him snatched his phone and flung him into the river below the bridge. Scott briefed the crew the next day on the fresh case at hand. Ken Gregory was the AG’s senior administrative assistant when he was discovered dead in the river. As a result, they had to investigate the death from every angle and ensure that the AG was safe when she arrived in Budapest. He also tasked Jamie with leading the squad since he needed to establish a new security detail for the AG.

Jamie, on the other hand, went to meet Attorney General Rebecca Blair, who had come early to Budapest despite being aware of the dangers and was determined about staying. As a result, the crew had no choice but to safeguard her while working on the inquiry. Meanwhile, Andre and Katrin were able to obtain camera footage of a woman throwing Ken off the bridge. Katrin later met up with her acquaintance to learn more about the situation between the US and the Hungarian governments. She eventually discovered that the Americans were attempting to extradite John Mallory, a US citizen who had been labeled a traitor for attempting to leak sensitive information in public. Meanwhile, Cameron and Kyle, a rookie FBI agent from the home office, had discovered the identity of Mia Sahar, the woman who murdered Ken.   She was seeking vengeance on the US government, which was attempting to prevent John Mallory from revealing the death list, which comprised the names of Afghan nationals who assisted US citizens in leaving Afghanistan. The US government had given the Taliban a list of persons who had assisted them, which included Mia’s fiance’s name.

Jamie discovered this from Mallory, who also stated that he was a whistleblower rather than a traitor. The Americans, on the other hand, planned to bury him by transporting him to the United States. Jamie was hesitant to assist AG Blair, but Scott persuaded her to stay with the operation in order to protect her, even if she disagreed with what Blair was doing. Later, AG’s convoy was escorted by a new security detail, but Mia was able to infiltrate it by joining the escorting police squad. She attempted to shoot Blair, but Jamie stepped in to save her. Cameron and Kyle pursued Mia, but she managed to flee. Scott, on the other hand, pursued her on his bike and soon caught up with her. Mallory’s extraction procedure was eventually approved, and AG left Budapest. She hailed Jamie for protecting her even if she didn’t trust her before leaving. Finally, we watched Cameron and Kyle leave the office in their car, but they were being followed.