Are You Ready for Chicago Med Season 7 Episode 2: “To Lean In, or to Let Go” 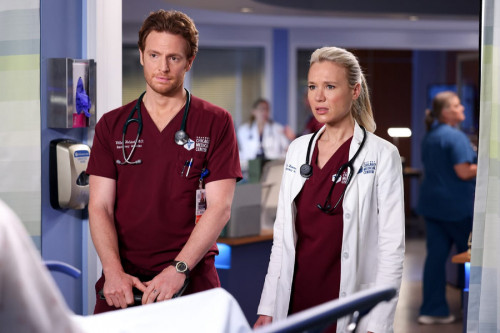 Everyone was startled by the comeback on Chicago Med Season 7 Episode 1, but even more so when they learned the truth about it. Chicago Med began its seventh season on Wednesday, with a premiere that said goodbye to one of the show’s original characters while introducing viewers to a slew of new doctors. After his role in covering up for Natalie’s (Torrey DeVitto) conduct, Dr. Will Halstead (Nick Gehlfuss) was able to reclaim his position. After a brief parting scene with Natalie introduced two new doctors. Stevie and Dylan are also treating a young child with sickle cell anemia. What does the future hold for Chicago Med’s doctors and nurses? Below you’ll find at www.tvacute.com the most recent season 7 promotional materials, including the promo, synopsis, and photographs for episode 2 titled, “To Lean In, or To Let Go.”

The tensions between Med’s newest doctor Dr. Dylan Scott (Guy Lockard), and interim chief of the ED Dr. Dean Archer (Steven Weber) appear to grow the next episode of Chicago Med. Given how Dean has handled confrontations with his peers in the past, it will be fascinating to see how he reacts when Dylan criticizes him for his management of the problem. meanwhile, Will and Dr. Stevie Hammer (Kristen Hager) will partner together to treat a high school student with a rare disease in this episode.

Chicago Med Episode 702 Synopsis: Vanessa and Archer disagree on how to handle the victim of a motorcycle accident. Dylan and Charles deal with a UNICEF negotiator with repressed trauma. Stevie and Will treat a high schooler with Addison’s disease and a clingy mother.

The Chicago Med Season 7 Episode 2 set date is September 29, 2021, which airs every Wednesday from 08:00 PM – 09:00 PM on NBC.  You can also stream this episode on NBC’s website, CityTV, Hulu, Peacock TV, and YouTube TV. If you want to watch the previous seasons of the show, you can buy it on Amazon Prime Video.

Dr. Natalie Manning ( Torrey DeVitto ) made her final appearance in the opening episode after confessing to stealing the medications. She is fired shortly after for misconduct… Will also goes back to the hospital after being sacked for allegedly stealing the medicine. After Dr. Natalie confessed, he was able to reclaim his position. Dr. Will Halstead, on the other hand, is told by Goodwin that if he wants his job back, he must become his spy and dig up dirt on Dr. Cooper. Natalie’s automobile is being packed by Dr. Will Halstead. They say their goodbyes, and he encourages her to stay in touch.  Meanwhile, after the medical history is lost, the patient’s condition deteriorates. After Will’s patient is moved to Crockett, everything happens in his absence. When Will returns, he insists on going ahead with the operation, but Crockett is skeptical. As a result, he contacts Dr. Coper, who concurs. As a result, Will and Crockett are forced to perform surgery. Maggie is also taken aback when she learns that her long-lost daughter works at the same hospital. Furthermore, Taylor works really hard, while Maggie maintains a safe distance from her. Guy Lockard, who plays Dr. Dylan Scott, has two cases. To begin, he treats a young boy who has been bitten by a snake as part of a gang initiation ceremony. Later, he encounters a young black girl who has sickle cell anemia. Scott is perplexed by her condition and seeks the advice of Dr. Hammer. According to the sources, Hammer believes the child is sleeping in her car. However, the girl quickly confesses to having been homeless in the past. The young girl returns to care for her mother after receiving her treatment.