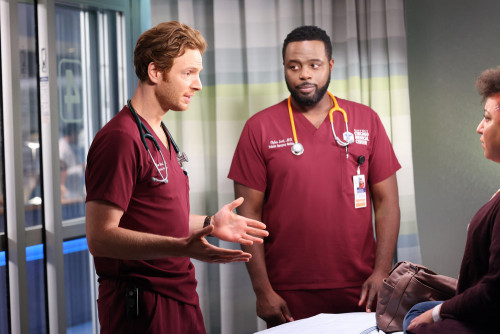 The NBC medical drama had some severe friction between Vanessa (Asjha Cooper) and Dean (Steven Weber) as they differed on the best approach to treat a patient. The drama on Chicago Med is going great.  The doctors at Gaffney Medical Center will have to cope with a rich contributor who stretches his muscles to obtain what he wants in the next episode of the show. Below you’ll find at www.tvacute.com the most recent season 7 promotional materials, including the promo, synopsis, and photos for episode 3 titled, “Be the Change You Want to See”

A new physician Dr. Stevie Hammer (Kristen Hager) can be seen in the promo below. Stevie has a significant secret, as viewers learn in the first episode. When a patient arrived, she was diagnosed with knee arthritis, which she later discovered was caused by poor sleeping circumstances and homelessness. Stevie was aware of this because her own mother is a homeless person. She sees her mother in a tent at the end of the episode and attempts to care for her. It’s evident that this was Stevie’s first encounter with her since returning to Chicago, which raises a slew of unresolved questions for viewers. Aside from learning more about Stevie’s past, we’d like to learn more about her relationship with the other patients at the hospital. It appears that there will be a lot more backstory to be presented for the rest of the season, which we’re looking forward to seeing.

Chicago Med Episode 703 Synopsis: Dylan and Will deal with a dishonest patient whose lupus is in remission. A wealthy donor makes inappropriate advances toward Stevie. Vanessa, Crockett, and Charles try to convince a young woman to have life-saving surgery.

The Chicago Med Season 7 Episode 3 set date is October 6, 2021, which airs every Wednesday from 08:00 PM – 09:00 PM on NBC.  You can also stream this episode on NBC’s website, CityTV, Hulu, Peacock TV, and YouTube TV. If you want to watch the previous seasons of the show, you can buy it on Amazon Prime Video.

Sharon has obviously done some investigating on Cooper and informs Will that Cooper has received what she believes to be kickbacks, but she needs proof. Will says he’ll go to the ICU and see what he can learn. Vanessa expresses her gratitude to Maggie for bringing her a cupcake on her birthday. Maggie hopes she didn’t do anything wrong. Vanessa is unconcerned about it. She also arrives two hours early to gain a head start on the competition. Sharon enters the emergency room in search of Will. While she is there, she asks Marcel if he would like to volunteer as a mentor for the new residents. Will requests an A1C test to determine if he has diabetes. Brandon is meant to be in a research trial for Addison’s disease, but he can’t be if he has diabetes, according to his mother. The girl who swallowed the drugs claims to have done so by accident. She is a UNICEF negotiator who is eager to get started. Charles is impressed, yet he can imagine how difficult this work is.

Outside, Charles informs Scott that he is suffering from PTSD, burnout, and despair. Scott wonders if this is Krista’s wake-up call. When a motorcycle accident occurs, Archer informs them that they are out of bed. The driver of the car feels anxious and requests her anti-anxiety medication. She’s terrified of the possibility that the motorcyclist has died. Vanessa offers a different course of action. According to Archer, this could result in sepsis. Scott tries to explain to Krista about PTSD and his personal experience with the disorder, as well as how therapy helped him. Charles recommends that she spend a few days at the in-patient psychiatric facility. Krista concurs. Brandon took more medications because he refused to take part in the study. London will have to wait for a while. Stevie declares that she will obtain the discharge papers. Will expresses his concern for the child to Stevie. Will believes his mother is attempting to keep him at home. Stevie claims that it is not our decision. Charles is on the phone, looking for a place for Krista to sleep. Krista is taking up a bed when she should be in mental, Archer complains to Scott. Vanessa confides in Maggie that she knows she did the right thing, but she’s scared it won’t turn out the way she wants. Charles can’t sleep since he can’t find a bed. Archer is adamant that they require the bed immediately. Bachmann is the place to send her.