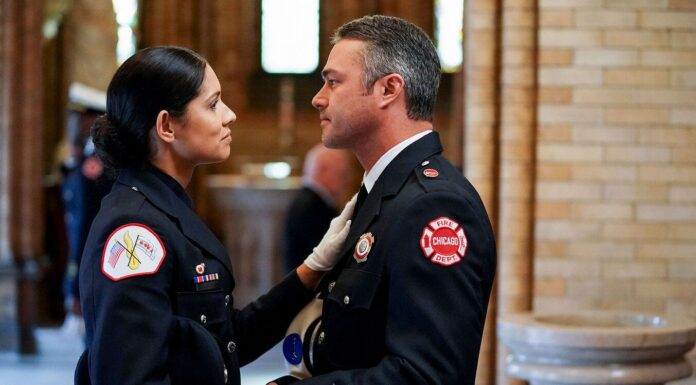 Chicago Fire season 10 episode 22 will release on May 25, 2022, at 9 p.m. on NBC. The drama’s tenth-season finale is hot, with sirens giving way to wedding bells.  Capt. Matt Casey’s role as Best Man is to help Severide through what will be a very topsy-turvy wedding. He’s also there to spend time with Brett.

In Season 10 Episode 21 Kidd and Severide fought. Severide was tired of Kidd always winning.  Hawkins was interested in learning more about Emma’s previous job. Violet received the dreadful news from Gallo. She rescued Emma from a speeding automobile. Severide’s bad day continued, he apprehended the driver who was a heroin dealer. The drug dealer’s pals thrashed Severide in an alley. he was hospitalized. (keep reading the recap section) To understand more about episode 21. What can fans expect from the finale episode of Chicago Fire?  At www.tvacute.com, you’ve come to the perfect place to get the Chicago Fire Season 10 Episode 22 promo and synopsis. 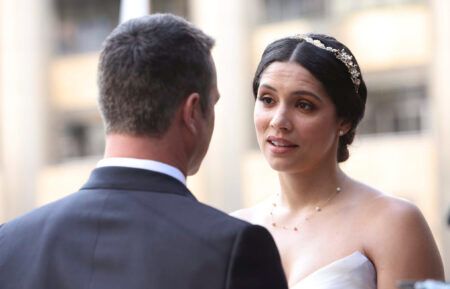 Chicago Fire season finale titled called The Magnificent City of Chicago, focuses on the Stellaride Wedding. In terms of the Stellaride wedding, The big day for Kelly Severide (Taylor Kinney) and Stella Kidd (Miranda Rae Mayo) of Firehouse 51 means the return of the groom’s best man, Matt Casey from Oregon.  Casey (Jesse Spencer leaving the show on October 20) had agreed to be Best Man at the wedding of his former roommates, Kelly Severide and Stella Kidd.  At the very least, he has a ready-made date with paramedic Sylvie Brett (Kara Killmer), his long-distance love. So the long-distance relationship with Brett will be highlighted. We may anticipate that things will not go smoothly. This involves some potentially serious difficulties for Severide, which begins in the season’s penultimate episode and continues into the season finale.

‘Chicago Fire’ season 10 episode 22 will air on May 25, 2022, at 9 p.m. The programs are 42 minutes long and air every Wednesday. there will be a break on January 26. It’s possible that a new episode will air in early February. Where to Stream Chicago Fire S10E18 Online?  It’s also available on NBC’s official website and app. All of these services and more will be able to stream the episode. such as Fubo tv, YoutubeTV, Direct TV The episode is available on Hulu and Peacock a day later. Amazon Prime Video, iTunes, Microsoft Store, Vudu, Spectrum, and Google Play also sell or rent the episodes.

Kidd and Severide fought. Kidd got her way when Gallo stayed on her squad and turned down Severide’s offer. Kidd was thrilled she didn’t have to find someone new. Severide wasn’t happy because he understood she always wins when they fight. Gallo was her subject. Severide was tired of Kidd always winning. She was told. He said nothing else, and they didn’t talk. The next morning’s ride to work was unpleasant. When they had to work on the same scene, it was still awkward. Food truck and car fire drew the attention of the entire station. . Car and driver were fine. The truck driver declined treatment. He kept running to the truck to collect whatever he was bringing, and he and the fireman who after him almost blew up. The man wouldn’t rest in the ambulance. Violet threatened to intubate him if he didn’t relax. This threat made the individual cooperate.

Violet wouldn’t be so short-tempered if she didn’t know what Emma was doing to her. She was outraged that Hawkins’ job was at risk. Violet criticised Emma. Emma blackmailed Hawkins to gain her job. Violet was reassured by Hawkins. He told her not to tell anyone, so she did.  Violet eventually surrendered. She informed Gallo. Gallo wanted to help, so Violet told him that Hawkins would take care of everything.  According to Hawkins, Emma came highly recommended from a tiny town. Hawkins was interested in learning more about Emma’s previous job. He was planning on driving himself until Gallo offered to assist him. Gallo visited the village. The Fire Chief was there. He learned that the town couldn’t legally discuss prior members, therefore he couldn’t talk about Emma. When Gallo questioned about Emma’s blackmailing, the chief said it was against policy to comment. Gallo returned to Chicago clueless. Hawkins’ idea didn’t pan out. Nobody knew how to defend Violet’s employment. Emma was clearly trouble. She urgently desired a Chicago job.

Violet received the dreadful news from Gallo. She was desperate at the time when she was summoned to a scene with Emma. Violet rescued Emma from a speeding automobile. Emma was grateful. When Severide’s day went bad, they were learning to tolerate one other. Food truck man showed up. His truck was lost. Severide consented to help, but his suspicions were confirmed when he located the truck. The propane tank in the truck was not utilised for cooking. There were many drug bags inside. The driver was a heroin dealer. Severide discovered them. He dialled 911. The driver was apprehended after pulling a revolver on Severide. When Sev returned home, a man said that his wife needed assistance. The drug dealer’s pals thrashed Severide in an alley. Severide was hospitalised. Kidd went to see him. Because of his illness, she forgot about their awkwardness. Severide agreed. He wants to marry her and doesn’t care who wins. Mouch lost his chair at the fire station because several other guys interfered with it, he requested that one of them give up his sofa. Emma requested Hawkins give her Violet’s job sooner.