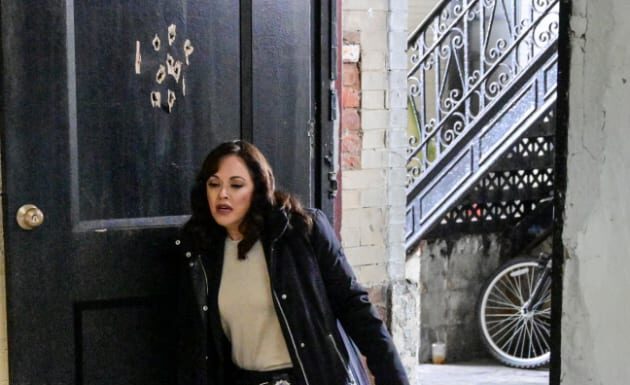 Erin’s recent infatuation with politics prompted a midlife crisis on Blue Bloods Season 12 Episode 8, when a law school buddy said she wasn’t personable enough to run for office. Erin’s lack of socialization was both a positive and negative component in her campaign’s success, according to Lisa. Read Blue Bloods Recap below. Now fans are excited to see what episode 9 has in store after viewing episode 8. And when Blue Bloods season 12 episode 9 will air?  You’ve found the best spot to acquire Blue Bloods season 12 episode 9  promo at www.tvacute.com.  A cyberattack on the NYPD is investigated in the new episode “Firewall” with the help of an old friend, Sloane Thompson (returning guest star Alex Kingston).

Blue Bloods Episode 1209 Synopsis:– A cyber-attack on the NYPD forces Danny and Baez to release an evasive suspect; Baez questions her place within the NYPD; Eddie is torn over a workplace dilemma; Jamie wrestles with a family secret.

Blue Bloods S12xE09 will release on 10 December 2021 at 10 p.m. ET on CBS, Weekly releases on Fridays with an average runtime of 42-44 minutes. If you have a cable subscription, you may watch ‘Blue Bloods’ season 12 Episode 9 on CBS at the hour stated. The new episodes will be available on the CBS official website as well as Paramount+ after their release. Subscribers to DirecTV, FuboTV, and YouTube TV can watch the episode live. Post-release, the episode should be available on VOD providers like Amazon Prime Video, Vudu, Google Play, and iTunes. A Hulu subscription also gives you access to the first nine seasons of the show.’

Badillo informs Jamie that he is experiencing difficulties with Eddie. They aren’t a good match for each other as partners. Speaking about partners that don’t function well together, Anthony introduced Danny to his cousin Joey, who is a member of the Double Treys gang. They are, in fact, on the lookout for Joey. If he goes undercover for them, Anthony has offered him security. On his side, Danny invited Anthony to join him in this investigation. Despite the fact that they don’t get along, Anthony cares about his cousin, no matter how many times he has messed up. As a result, he joins Danny. Erin, on the other hand, is looking forward to becoming a DA and receiving all of the assistance she requires. As a result, she made contact with Lisa. Frank is up against a group called Patrons Of Police, which has a lot of power. They refer to Frank as their founder and place his remarks at the forefront of their campaign. Despite having no affiliation with the gang, Frank was powerless to intervene.

Frank later met Kurt, the organization’s leader, but they couldn’t agree on anything. He, on the other hand, invited Frank to his show. Joey’s initial task was to find the first link to the Double Treys, which Danny and Anthony accompanied him on. Meanwhile, Eddie had expressed his dissatisfaction with Badillo’s performance. They embarked on a mission that became a model for others to follow. If Erin wanted to be a DA, she looked for ways to make people like her. She believes her career is on the rise, although Anthony has aided her in certain ways. Jamie afterwards spoke with Eddie and informed her of Badillo’s loss of partner. He wants her to help him get back on track in the same way she helped her. The plan of Danny and Anthony goes awry when Joey is kidnapped. They eventually track him down and apprehend the group that kidnapped him. Lisa tells Erin that she isn’t ready because she doesn’t think she has many solid relationships, but Anthony assures her that she is. After a conversation between Eddie and Badillo, Frank agrees to join Kurt on his podcast.