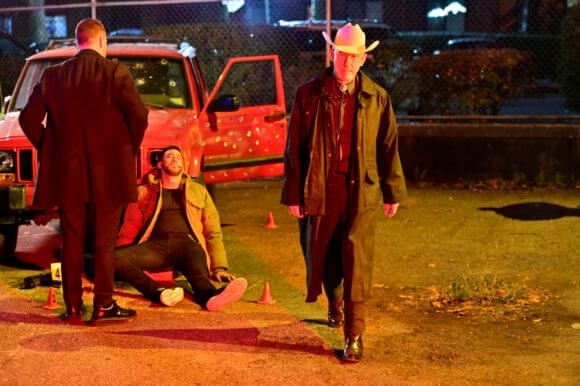 In the previous episode of Blue Bloods Season 12, we saw Jamie returns home to retrieve Eddie’s wallet, he discovers Henry fast asleep. Jamie realizes the kitchen is on fire when the smoke alarm goes off. He gets rid of it. Henry unintentionally turned on a burner. Henry is adamant that Jamie keep this between the two of them. Eddie is conversing with another cop. Read Blue Bloods Recap below. Now fans are excited to see what episode 10 has in store after viewing the fall finale episode. You’ve found the best spot to acquire Blue Bloods season 12 episode 10 Photos and promo at www.tvacute.com.

We’ve been waiting a long time for this episode, and we’re hopeful that “Old Friends” will deliver at least a few surprises. We may imagine Jamie Reagan learning some surprising details about someone close to him. The good news, Maria Baez will appear in Blue Bloods season 12 episode 10.

When Texas Ranger and Major Waylon Gates (Grammy-winning artist Lyle Lovett) return to New York City on the trail of an illegal narcotics shipment, he teams up with Det. Danny Reagan once more (Donnie Wahlberg). Frank (Tom Selleck) has his hands full in the executive offices with Mayor Chase (Dylan Walsh), who is dissatisfied with the commissioner’s handling of a scuffle between demonstrators and police during a rally.

We hope that this episode gives us a chance to see Jamie and Eddie’s relationship play out in a way that we haven’t seen before. In this show, we often see the two in some kind of conflict. They usually work it out, but we often have to see them fight and argue first. When these two are on the same page for most of an episode, we’d love to see it.

Blue Bloods Episode 1210 Synopsis:– An illegal drug shipment arriving in New York City must be found before the narcotics flood the streets; Jamie helps a neighbor handle a gambling debt; Frank receives pushback from Mayor Chase over his handling of a brawl.

Blue Bloods S12xE10 will release on 7 January 2022 at 10 p.m. ET on CBS, Weekly releases on Fridays with an average runtime of 42-44 minutes. If you have a cable subscription, you may watch ‘Blue Bloods’ season 12 Episode 10 on CBS at the hour stated. The new episodes will be available on the CBS official website as well as Paramount+ after their release. Subscribers to DirecTV, FuboTV, and YouTube TV can watch the episode live. Post-release, the episode should be available on VOD providers like Amazon Prime Video, Vudu, Google Play, and iTunes. A Hulu subscription also gives you access to the first nine seasons of the show.’

When Jamie returns home to retrieve Eddie’s wallet, he discovers Henry fast asleep. Jamie realises the kitchen is on fire when the smoke alarm goes off. He gets rid of it. Henry unintentionally turned on a burner. Henry is adamant that Jamie keep this between the two of them. Eddie is conversing with another cop. The other officer is exhausted. Shots are fired out of nowhere. They are pursuing them. The other officer is killed. Sloan approaches Frank during a gathering where he appears to be ignoring everyone. She is presently employed in the private sector. Garrett gets in the way. He informs Frank that the systems have been hacked and that everything is down.

The cops are getting a lot of bad press as a result of the attack, but Sid is glad it only lasted 62 minutes. Sloane appears and requests to speak with Frank. She now works as a cybersecurity expert. She is aware of the attack and claims it was merely a test to see what they could do to the system. Frank is irritated by the coincidence of her arriving with a solution so soon after the attack. She denies any involvement in the attack. She is eager to assist. Baez and Danny are being pursued by a Philadelphia investigator. Powers had a total of six victims, all of whom were dog owners. Danny reminds out that she isn’t holding him either. She claims he jumped bail because of bad policing, not because of bad policing. Danny informs her that she has no authority and that they will be the ones to put an end to Powers’ reign of terror.

Eddie makes a sort of hypothetical suggestion, but withholds a lot of information from Jamie. Jamie, on the other hand, is withholding a lot of information about his circumstances. Powers is said to be at an apartment with a woman, according to a tip from a doorman or someone. They arrive at the apartment to find a dog in a crate and a woman in the bedroom chained and gagged. Baez remains still. The sufferer has little recollection of what happened. She’s angry and thinks she’s stupid. The assailant claimed he had misplaced his dog and then attacked her once she allowed him in. Danny is informed by Baez that she is dizzy. She has the impression that she is a novice all over again, and that the case is following her home. She inquires as to if Danny is tired of the violence. And now, with the help of their cellphones, the public is putting them on trial. Danny claims that this is something that everyone goes through. Baez claims she doesn’t have a husband or a car, only this work. Danny claims to have him, but she wants him to deal with this on his own.

Eddie seeks Erin’s advice. Erin has no experience in labour law. Eddie is perplexed as to how Erin manages to accomplish so much on her own. Erin claims she didn’t do everything herself. Eddie claims that this woman is single. Erin informs her that it’s important for women to stick together. Frank inquires about Abigail’s thoughts. Sloane, she believes, isn’t above attempting to close this business by using a previous friendship. She is aware that Frank was once involved with Sloane. Sloane didn’t look him up when she returned, but Frank says it didn’t bother him. He does confess, however, that he has been busy, and that a part of him may have desired a relationship that was sealed from the inside out. Abigail believes he was attempting to elicit a personal response from Sloane.

Henry despises Jamie for cleaning his chimney. He acknowledges that he wakes up every day and checks to see if he has dementia. He wants Jamie to back off since age-proofing his house won’t change the truth that time will eventually win out. Danny and Eddie discuss how full moons affect people during family dinner. Erin isn’t convinced. Frank claims that people have always been insane and asks Henry if he recalls anything. Henry is not one of them. He and Jamie exchange a few words. Eddie wants to know what’s going on with Jamie and Henry on the way home. Jamie is honest with her. Eddie wishes he’d told her sooner. Jamie claims that Henry is his idol, and that he wishes to repay him, but that he has damaged his feelings. Eddie suggests focusing on Jamie’s need for Henry. Jamie is curious about her secret, but Eddie refuses to tell him.

Danny states loudly that he must sift through a large number of Bill Smiths. Baez is an expert at what he does. Danny declares that if she refuses to assist, he will have to handle everything on his own. Baez offers him some advice. She decides to accompany him.

Sloane pays a visit to Frank. He expresses regret. She refuses to be angry with him or to show any emotion at all. Frank has a deal with her. She’s content. He’s the same way. However, he can only afford to pay her a third of her asking amount. He inquires about her former boss, Gerald Foster. Foster was sexually harassing her, he knows. She can’t reveal anything because she’s bound by her NDA. She feels resentful of the fact that she is nothing more than a target of his probe. She is enraged and refuses to sign the contract. Eddie is well aware that Cora is avoiding her. She claims she wants some guidance from Cora because she plans to start a family one day. Eddie, Cora believes, has been spying on her. Eddie flatly rejects it. Cora accuses her of being deceitful and leaves.Baez is drained. As shown by Powers shooting at them, the next door is the correct one. Danny has him handcuffed, but Baez has been shot and is unconscious. In the hospital, Baez awakens. Danny has a gigantic bear in mind for her. She claims she was just grazed by the gunfire. For Danny, it’s a little too near for comfort. Iris is also present to express her gratitude. At a bar, Frank meets Sloane. The contract was signed by the board of directors. She has a frigid demeanor toward him. He expresses regret and agrees to investigate Gerald Foster. She wants to put it behind her. She also apologizes for not phoning him. She believes that admitting they’re too old for a relationship now isn’t so horrible. Frank is preoccupied with his job, his father, and family gatherings. She has a place to live, friends, and is not depressed, even if she isn’t happy.

Cora is on desk duty and is on the receiving end of a vexing phone conversation. Jamie calls her in and informs her that she has a 15-minute interview with the detective’s office. He assures her that nothing is overlooked and that he was aware of her pregnancy when he postponed the interview. He proposes that she admits her error. She exits the room and embraces Eddie. Eddie is told by Jamie that he needs to go build a porch. When Henry walks by, he notices Jamie unloading wood. He doesn’t believe Jamie requires his assistance in repairing the porch. Jamie claims that he needs him now more than ever and that he needs to remain for a while. Henry informs him that he does not require all of the wood and that he should return some of it.