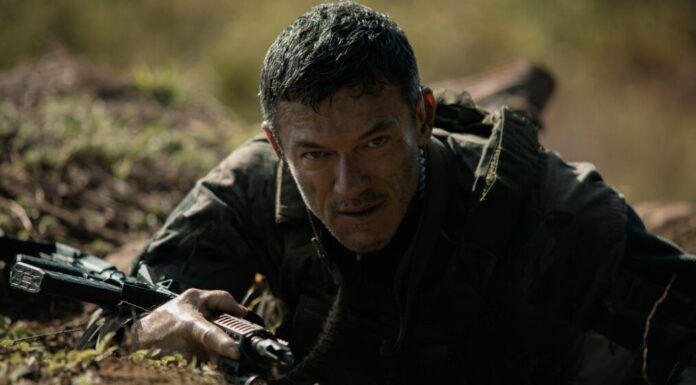 The eighth episode titled “Family Matters” of Echo 3 is directed by Mark Boal and was written by Zach Craley and Mark Boal. It goes further into the protagonists’ familial relationships while the previous episodes of Echo 3 primarily focused on the rescue effort. The focus of this episode is on the family issues that exist between these people. Special ops soldiers Bambi (Luke Evans) and Prince (Michiel Huisman) hire local South American mercenaries to carry out a raid on the prison where a suffering Amber (Jessica Ann Collins), Bambi’s sister and Prince’s wife, is awaiting her execution date after wasting the previous episodes devising a fruitless hostage-rescue plan. (tvacute.com) Here is all you need to know about the conclusion of the Echo 3 Episode 8 Recap in case you missed any of the exciting moments.

Amber is seen hanging by ropes and it appears that the local police are torturing her since she recently tried to flee. After being rescued, Momo (Juan Pablo Urrego) goes back to his brother Tariq’s (Vicente Pea) house to meet him while attempting to maintain her sanity in the face of tough circumstances. We saw Bambi attempting to stop Prince from injuring Momo by the end of the last episode. The two send him back home because the alternative of blackmailing does not succeed. Momo still has resentment toward Tariq for failing to save him and even allowing him to be electrocuted as a result of his intransigence and haughtiness. Tariq’s appeal to save Amber may have been made by Momo because of concern that he may be captured once more. Even now, he refuses to embrace it and thinks nothing of the Americans’ threat to the world.

Amber, who is being held captive, is experiencing a sequence of hallucinations as she remains there. She had dreams of the terrifying incident in her childhood when her mother’s partner threatened to kill her and Bambi. In order to protect themselves at the moment, Bambi shot and murdered this person. However, it left both siblings with emotional wounds that are still there today. She reassured him when he was younger that what he did was okay in order to help him let go of his remorse over the murder. While attempting to imagine a life outside of the restrictions, there are also small flashes of remembrance of her moments with Prince that she goes through. The brother continues to make efforts to save the sister as she is experiencing these agonizing dreamscapes. Amber is shown in a video by Prince, and it is obvious that she has experienced trauma. At that point, Bambi arrives with Javi, a local man who has information about her. He heard their intention to assassinate her in the coming days. He makes mention of Tariq, who is the boss and has the power to order her execution. Meanwhile, they are forcing her to behave in a way that serves their purposes and treating her like an animal. Additionally, she is given medicines that have a hallucinogenic effect.

She imagines Bambi coming to her house, shooting Tommy in the head, and dragging her away in that state. When their mother leaves to return to the US, she makes an attempt to speak with Prince’s father, Eric Hass II, to inform him of the kidnapping and the rescue effort. Reese, with whom Prince had a brief liaison, enters the room and sets up a video connection for her and him. She makes reference to Roy’s man being killed, Prince, and Bambi being criminals. He continues to reject any connection while pointing out that they control their own destiny. She is made to feel stupid for believing he would put a stop to them by him. The episode also briefly witnesses Amber and Prince’s first encounter, where she meets this wealthy, pampered brat and quickly bonds with him. She introduces him to Bambi, and the two of them get along like long-lost brothers. She continues to see Bambi sitting next to her in the present while talking about his prior military adventures. She regards it as unreal and continues to make efforts to regain her sanity.

When Mitch and Prince return to their covert position, he tells Prince that they must enter with badges by posing as soldiers of the Colombian army. He makes note of the challenges they face and the need to operate in that manner. Later, he runs upon some locals Bambi hired to assist in the rescue effort. He observes his father’s response through a note, in which he expresses his pride in him. These individuals receive a motivational speech from Prince and Bambi in which they stress the value of maintaining their covert nature. They persuade them that they are doing honorably and with integrity in order to protect their families, and that if they encounter any problems they may leave right away. They tell them about the goings-on in the area and present them with a complex plan for how to penetrate based on their various teams. They inquire as to how they can locate her in the crowd and are informed that it will be simpler for them to do so because they have drones. In addition, she will probably be near one of the locations from the facility where they must go without jeopardizing the objective, according to Javi.

Tariq, Tommy, Momo, and a local official debate their potential future business partnership. With the promise of money, they decide to work together. They talk about how Tariq is reluctant to engage in any aggressive activity as one of their differences. When Tommy makes fun of him, Tariq takes it personally and snaps at Tommy. Later, after making amends, they start to get along again, and he leaves with Momo. He is shot by Prince’s guys right after he steps outside. Allowing them to continue the rescue effort seems to be a diversion. Bambi and Prince have an emotional chat about their pasts back at their camp. Even though he is so wealthy, Prince mentions Bambi as an influence for his decision to enlist. He admits that he could have saved Drifter on their previous rescue mission after becoming distraught upon hearing that. Since he couldn’t save both of them, he preferred to save Prince. When Prince inquires as to his reasoning, he recalls a discussion he had with Amber in which he vowed to protect her fiance whatsoever the circumstances. The squad then divides into its several teams and moves toward the facility through the river as the show comes to a close.