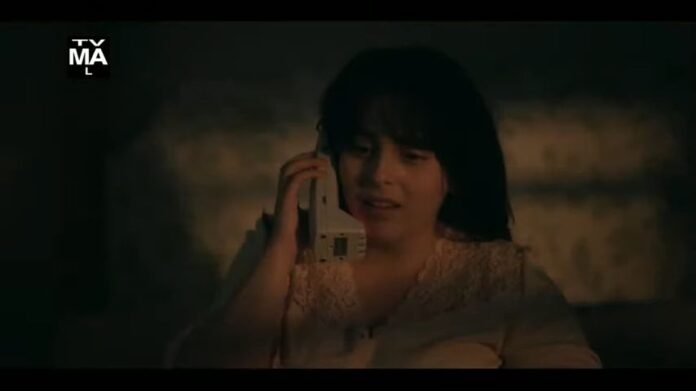 Facebook
Twitter
Pinterest
WhatsApp
ReddIt
ACS Impeachment: has reached the point when things are starting to get pretty fascinating. Those who were alive during the Monica Lewinsky and Bill Clinton controversy will recall the fallout from the public learning of their secret affair. Monica Lewinsky and Linda Tripp are the focus of this week’s programme.  We don’t even see Paula Jones, depriving the series of one of its three essential characters.  Linda Tripp (Sarah Paulson) has started recording her phone talks with Monica at this point in the series (Beanie Feldstein). what will happen in the next episode 5 titled  “Do You Hear What I Hear?”, we are half way now.  you can take a glimpse of ACS: Impeachment episode 5 synopsis and promo with www.tvacute.com below, which will enable you to understand the episode better. plus you can read episode 4 recap below.

Impeachment Episode 305 Synopsis: As Monica prepares to leave D.C., she grows concerned that someone is sharing news about her affair. Linda meets with the FBI.

American Crime Story: Impeachment Season 3 Episode 5 titled “Do You Hear What I Hear?” will release on FX on October 5 at 10 p.m. ET/PT. Season 3 will consist of ten episodes with a duration of 41-66 minutes that will air every Tuesday night. While the show airs on FX, but don’t worry if you don’t have cable Each new episode will be available to Hulu subscribers the following day at 12:01 a.m. Hawaii time (2:01 a.m. PST/5:01 a.m. EST). You may also view the first episode on FX’s website or the FXNOW app using your cable username and password. Apps for iOS, Android, Amazon Fire Tablet, Apple TV, Android TV, Roku, Amazon Fire TV, and Xbox are presently available. Without cable, viewers can watch Impeachment live on any of those platforms. FX is available on YouTube TV, Hulu + Live TV, and Sling TV.

Monica had seen the item in Newsweek and is furious with Linda, dragging her into the kitchen and questioning why she did it. Monica follows Linda to her desk and warns her that she may lose her job as a result of this. Linda discovers a document titled “Bill and Hillary’s Body Count” after Monica goes away. It’s a list of persons connected to the Clintons who died in suspicious circumstances, and Vincent Foster, Linda’s old boss, is on it. Linda returns home jittery and calls Lucianne Goldberg (Margo Martindale) to tell her she needs to talk to her right away. Monica apologises to Linda later that night on the phone. Marsha, she believes, is one of Bill’s ex-girlfriends, and she is envious of her.

Linda calls Lucianne, and she tells her about Bill Clinton’s two-year affair with an intern, which began when the girl was just 21 years old. Lucianne, on the other hand, tells Linda to record Monica’s stories. Lucianne had been recording their talk when the call ended. Monica discovered a gap in Bill’s schedule and decided to drop by the White House. Monica sobs when Betty (Rae Dawn Chong) delivers her a bag of gifts Bill bought for her on Martha’s Vineyard. Linda, shaken by the call, makes up her mind and dials Lucianne’s number. Linda is warned by Lucianne that the press would go after Monica, but Linda believes that her Beverly Hills background will shield her and that it will be a minor tabloid item that will fade away quickly. Cut to Linda buying a tape recorder at Radio Shack, then to her first recorded chat with Monica, in which she begs her friend to repeat information she’s already heard about the affair.

Mike Isikoff (Danny Jacobs) has been summoned to Lucianne’s son’s apartment to meet with her and Linda. She wants Mike to break the storey in order for Linda’s book to be taken seriously. He tells Linda to turn off the tape player when she pulls out her tape player. The tapes, according to Linda, contain discussions concerning her friend’s involvement with the president and how she was promised a position that she never received. Linda calls Monica and tells her that she has a White House friend named Kate who told her that Monica’s name has a “Blackmark” on it and that she will never be hired there.  Linda informs Monica that if Bill isn’t going to bring her back to the White House, he should find her another job. Monica should ask Bill to speak with his friend Vernon Jordan, who has done favours for people close to the President, according to Linda.

Monica phones Betty at her house, upset by the news Linda revealed, and accuses her of lying. Bill Clinton (Clive Owen) returns her call and chastises her for making his secretary weep. Monica tells Bill she’s moving to New York City, which he thinks is a fantastic idea.

Monica walks into Vernon Jordan’s (Blair Underwood) office and is taken aback by his wall of celebrity photos, which includes Bill Cosby and Bill Clinton. Monica discusses her educational background. After a montage of recorded phone calls between Linda and Monica indicating that some time has passed, Monica is called by a UN ambassador who offers her a job. Monica is dissatisfied because she had hoped to work for Revlon. Linda tries to persuade Monica that the invitation to travel to New York is a good one, but Monica is irritated since Bill didn’t call her to discuss it, and she claims she no longer wants to go. Linda is, of course, taking notes on the conversation.Monica phones Linda to tell her that Bill had phoned and that he merely wanted to introduce her to UN Ambassador Bill Richardson because he is an excellent contact. Linda screams at Monica, chastising her for the polar opposites of the conversations and telling her to complain to someone else.

Linda receives a call from Lucianne, who requests an update. Linda takes the day off from work and returns Monica’s remorseful voice messages to her Pentagon office. Monica brings Linda over to help her clean out her closet, and Monica gives Linda some of her things. Monica invites Linda to spend the night with her while they tell each other stories about their ex-partners. Linda phones Lucianne and requests that the deadline for breaking the storey be accelerated. She goes on to say that she wants Monica to believe that Linda had no choice but to expose her secrets, and she inquires about the Paula Jones case with Licianne. Lucianne informs Linda that she will be making some phone calls. Richard Porter (Christopher Wallinger) is the man Lucianne calls, a lawyer we’ve seen working late at night on the Paula Jones case with George Conway (George Salazar), to whom he delivers the information. George gets up the phone and dials Paula Jones’ attorney’s number.Monica is at work when she receives an email from Revlon with a job offer. She reports to her employer and gives her notice. Linda Tripp is at home, opening a birthday card and present from Monica, despite the fact that she had previously informed her friend that she does not celebrate birthdays.