According to General Hospital [June 6] Teasers, this week will be full of secrets and lies 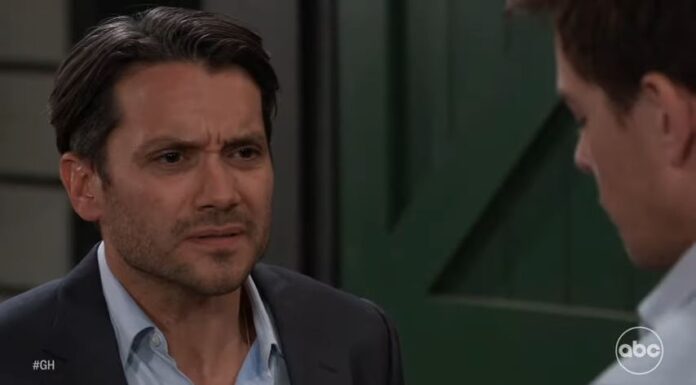 According to General Hospital [June 6] teasers, this week will be full of secrets and lies, with potentially disastrous results. Relationships are on the line, and threats will be made, but will anything get done before summer arrives? There’s a lot going on in Port Charles this week, and several folks are feeling the strain.

The affair between Esme (Avery Pohl) and Nikolas (Marcus Coloma) will have serious ramifications. Spencer (Nicholas Chavez) is being questioned by Ava (Maura West). She knows things between him and Esme haven’t been great, so this new “love” has piqued her interest. Trina (Tabyana Ali) is the one he truly desires, and he is now on a mission to save her. Meanwhile, Esme (Jon Lindstrom) pays a visit to Ryan to inform him that she has Nikolas in bed. What are the plans for the daughter and her father’s next adventure? All bets are off on something nefarious, as the two have demonstrated that they are out to harm the people of Port Charles.

Michael is confronted by Dante. When it comes to their father, Sonny’s sons aren’t on the same page. Michael (Chad Duell) is determined to hold his father accountable for choosing Nina (Cynthia Watros) over Carly (Laura Wright). Dante (Dominic Zamprogna) sees things differently and wants to make sure his brother doesn’t go too far in his quest for vengeance. Michael, on the other hand, appears to be unprepared to hear what his older brother has to say. He has plans for Sonny, and he isn’t going to let him down. This week will see all of that, as well as some Joss (Eden McCoy) and Trina sequences.

Let’s talk about Dex (Evan Hofer)! He hasn’t been seen on the screen in a while. After Chet (Chris Van Etten) returned to Port Charles, he ran Sonny’s (Maurice Benard) gym for a spell but wanted more. After being pushed, Sonny consented to meet with him in his office, and fans haven’t seen him since. This week on GH, that changes. Sonny will threaten Dex regarding his children. Dex’s identity remains a mystery, and there are many theories as to where he originated from.