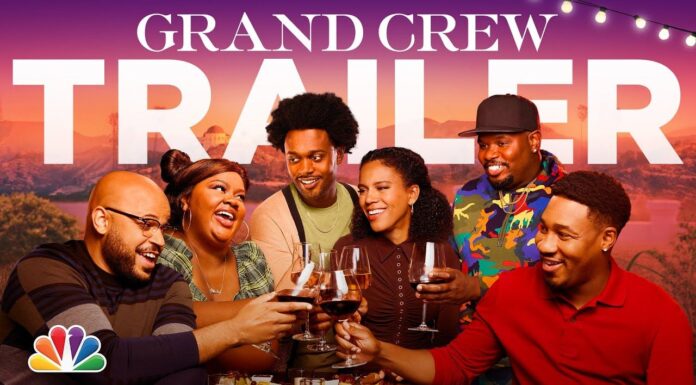 On December 14 night, one of NBC’s new sitcoms, the wine-themed Grand Crew, debuts on TV for the first time. Phil Augusta Jackson and Dan Goor, who worked on Brooklyn Nine-Nine, made a show about a group of young black professionals in Los Angeles who meet at their favorite wine bar to talk about their day and share their stories. Continue reading about the episode 1 +2 recap by scrolling down the page. What store for us?  www.tvacute.com has a promo and exclusive photos for Grand Crew Season 1 Episode 3 titled “Wine & Fire” below. As a result, you’ll be able to mentally prepare yourself for the next episode.

A sitcom about a group of Black friends in LA’s trendy Silverlake neighborhood who fight and bond over wine is the least promising of the night’s new comedies. They usually drink wine in bars. Wyatt (Justin Cunningham) and his wife, Kristen (Maya Lynne Robinson), are shown in the movie. Kristen starts a competition with her partner to see who can be the best host, and Wyatt is the winner. They get into trouble. It looks like they’re having more fun than we are, just like in the premiere episodes.

Grand Crew Episode 3 Synopsis:– The crew spends the night at Wyatt and Kristen’s house after being displaced by a local wildfire. And there’s wine.

Rushing home on Tuesday to watch the premiere of NBC's #GrandCrew at 8:30/7:30c like… 🚗💨💨💨 pic.twitter.com/uBvbz0edXO

Grand Crew Season 1 Episode 3 will release on January 4, 2022, from 08:30 PM – 09:00 PM The show will air on NBC. There are already two episodes of Grand Crew on Peacock.  Google Play, YoutubeTV, DirecTV, Vudu, FuboTV, Microsoft Store, iTunes, Xfinity, and Spectrum are among the paid live-streaming and VOD alternatives available.

Garrett Morris sits on a stool and discusses people’s perceptions of black men. Five pals are hanging out in Los Angeles at their customary hangout area. Noah (Echo Kellum) is dating the waitress and considers her to be a keeper. His friends make fun of him because he appears to say it about everyone he dates, including his more closed-off sister Nicky (Nicole Byer). One rom-com after another has governed his life, and he sincerely believes in its concepts, such as the meet-cute and the pull of fate. Wyatt (Justin Cunningham) is relieved to be free of the dating scene, but his marriage causes him to believe in the romantic ideals that Noah does.

Sherm (Carl Tart) and Anthony (Aaron Jennings), their roommates, are more pessimistic. When that blows up in his face, they’ll have to look for a new bar to drink in. Meanwhile, Nicky, who lacks her brother’s romantic ideals, is concerned that the man she’s dating is a Republican. At Wyatt’s anniversary party, Noah tries to hook up with someone, but a call from his ex sends him racing into a casual version of the relationship that he can’t abide by. The gang decides to go to a wine bar, where Sherm surprises everyone by delivering tasting notes on a glass of Cabernet Sauvignon.

Finally, Anthony becomes irritated that Sherm isn’t paying his fair share of the bills and isn’t working. Sherm tells Anthony that he sometimes feels he doesn’t fit in with the rest of the group since he’s deceptively brilliant but never went to college, and Anthony believes Sherm doesn’t think he’s Black enough because they met through Noah. However, before they talk things out, they engage in some “slap boxing.”