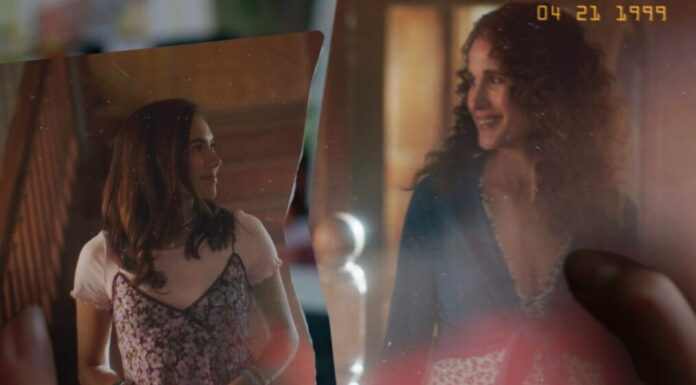 Hallmark Channel favorite Andie McDowell stars as Del in the multigenerational family drama The Way Home, who presides over an awkward reunion when she welcomes back to her Canada farm her daughter Kat (Chyler Leigh) after 20 years of separation. Alice, Kat’s feisty teen daughter (played by Sadie Laflamme-Snow), isn’t thrilled about the move to Port Haven, New Hampshire. The conflict arises from how these characters eventually learn to work together.   tvacute.com will provide a comprehensive recap on this page.

In the opening scene of the premiere on Sunday, which takes place in Port Haven, New Brunswick, in the year 1814, a group of men chases after a young woman whom they believe to be a witch. The woman utters a cryptic phrase just as she is about to be apprehended, and then she immediately dives into a nearby body of water. In the present day in Minneapolis, Kat (played by Chyler Leigh) and her ex-husband Brady (played by Al Mukadam) are dealing with their defiant daughter Alice (played by Sadie Laflamme-Snow), who tries to pull the smoke detector at a school talent show and then tosses a celebration at her own house. After discovering that her former partner is entirely ineffective in correcting Alice’s behavior, Kat concludes that a fresh start is in order. She was let go from her work at the newspaper, and her mother, Del, played by Andie MacDowell, wrote her a letter pleading with her to return to the family farm in Port Haven, Canada, so now is the ideal time to start over there.

Even though Del has taken all evidence of Kat’s father and little brother Jacob from the house, the area still evokes strong emotions for Kat because it was the last place she saw either of them alive. Kat hasn’t returned back home in twenty years because it triggers painful memories of both of them. This results in tension between the mother and daughter, which is made worse by Del’s claim that she has never written a letter to Kat. The situation becomes more problematic. During this time, Kat and Alice aren’t doing much better, and Alice is perpetually upset about her new home, school, and other aspects of her life. Kat and Alice aren’t doing much better. The mother and daughter meet a familiar face in Elliot, played by Evan Williams of Awkward. Elliot used to be Kat’s neighbor and best friend before the two of them lost touch. He is now the science teacher at the high school. (Del also brings up the fact that he is divorced.) Something happens to Elliot’s face the moment he sees Alice for the first time. The following day, while Alice was at school, he informed her that he would always be there for her, wherever she was, whenever she needed to talk. When Alice does not show up for her first day of school, Kat finds her and informs her that her father’s new girlfriend is coming in, which means that any chance Alice had of being able to live with her father has been eliminated.

The bracelet that her father had given to her mother and that her mother had given to Alice was thrown into the pond on the land of the farm by her before she made the decision to retrieve it. But just as she was about to grab it, Alice slipped and fell into the sea… and is rescued by her young mother, played by Alex Hook of I Am Frankie, in the year 1999! In this version of events, Kat and Elliot are still friends, and she has recently landed a job at a summer camp, where she will eventually meet the man who will become her husband and Alice’s father. As Alice discovers when she shares a loving and happy meal with Kat, Del, Kat’s dad Colton ( Jefferson Brown), and Kat’s little brother Jacob, the family dynamic is likewise entirely different.  During dinner, Alice finds young Elliot, played by David Webster, and confides in him that he had assured her that she could turn to him whenever she needed assistance. When Kat returns to the present, she discovers a Polaroid that Jacob took of her and an unknown woman named Alice at the meal they shared in 1999. In the meantime, Elliot reassures Kat, who is concerned about Alice’s whereabouts but has no idea where she went, that her daughter will find her way back home. Elliot hangs around by the pond as the last moments of the episode tick away.