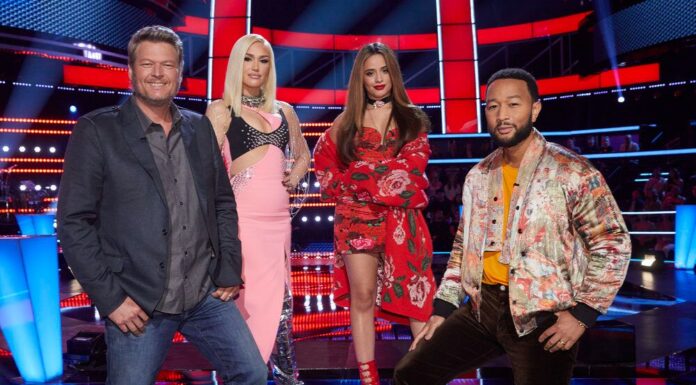 Who took home the trophy for The Voice season 22? The top five contestants from Season 22—Bodie, Omar Jose Cardona, Brayden Lape, and Bryce Leatherwood— compete in the show’s grand finale. The winner announced during the grand finale. As is customary for this competition, the new contestants compete for viewers’ attention against a stellar lineup of special guest stars. Among these is country music superstar Kane Brown, who will be joined by coach Blake Shelton. Former coach Kelly Clarkson, who returns to the program in March, perform a solo version of the song “Santa, Can’t You Hear Me,” which she originally recorded as a duet with Ariana Grande. Also included in the playlist are songs by OneRepublic, Maluma, Adam Lambert, BRELAND, and Girl Named Tom, the winner of the previous season. who would the American public vote for?   continue reading the recap at tvacute.com.

The opening of tonight’s episode features Carson Daly welcoming the coaches and warning that the show tonight is going to be a monster. A duet to Blake’s song “Hillbilly Bone” is performed by Blake Shelton and Bryce Leatherwood. The band OneRepublic enters the stage and sings “I Ain’ Worried.” Omar Next up is Jose Cardona, whose coach John Legend predicts difficulties because he can’t hit the notes he normally can. When John asks Omar what he can’t do, Omar responds that he can sing but can’t cook. In really dazzling outfits, they are performing a duet of “Signed, Sealed, Delivered” when they are ready. Adam Lambert, a Grammy-nominated performer and former American Idol runner-up, performs “Ordinary World” in honour of the victims of the recent terrible shooting in Colorado Springs and in support of the LGBTQ community.

Howie Mandel taught Camila how to be funny on television in a skit that made fun of this season’s worst joker.  Maluma performed a mash-up of his singles “Junio” and “Tukoh Taka,” the latter of which is the 2022 FIFA World Cup fan anthem, after the stage was decorated with the shimmering lights of his native Colombia. After claiming the trophy from the previous year, Girl Named Tom made a triumphant comeback and sang a mellow rendition of “One More Christmas,” a brand-new holiday song they dedicated to their father.The following coach-artist pairing was Brayden and Blake on the honky-tonk song “Chasin’ That Neon Rainbow”. In the package, Brayden hinted that Blake had treated him like a younger brother during the entire season, even making fun of his “heartthrobness.”

Over the course of the season, Camila and Morgan developed a sisterhood, becoming close because Camila had previously participated in a singing competition show. For their duet, Camila asked Morgan to sing along with her as she sang her own hit song, “Never Be the Same.”  Up-and-coming country singer-songwriter Breland performed “For What It’s Worth” off his debut album during the celebrations. Following Carson’s outlandish declaration that they are “best friends for life,” John and Blake made an appearance in the parody “The Oddest Couple,” which had a festive theme.  Blake made his third appearance of the evening on stage, joining Kane Brown for the explosive song “Different Man.” Blake clearly has a lot of respect for bodie and is convinced that he joined his squad to look cooler. Then, when Bodie requested that they perform his song “God’s Country” as a duet, Blake was taken aback.

The star-studded performances came to a finale. with an epic rendition of Kelly Clarkson’s holiday song “Santa, Can’t You Hear Me” by everyone’s favourite coach (who will be back in the chair next season). And as Kelly finished singing, “The Oddest Couple” came to an end.  Carson got right to work by calling the contestants to the stage and revealing that Brayden Lape had taken fifth place. Omar Jose Cardona, who finished fourth, was the artist.Carson revealed that Bryce Leatherwood had won “The Voice” in the closing remarks. Bodie and Morgan Myles both take the title of second place because it was unclear who finished second.

Congrats to the pride of Statesboro,GA… Bryce Leatherwood wins #TheVoice 👏🏻👏🏻👏🏻👏🏻👏🏻