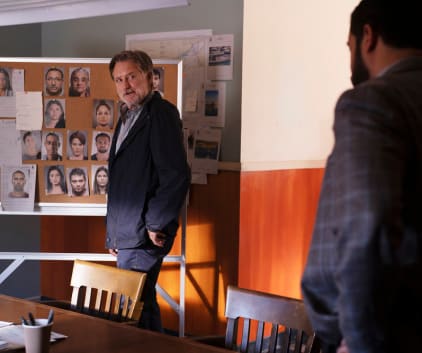 In the previous episode of The Sinner Season 4,  Harry is compelled to shoot Novak when he attempts to be smart. When Harry seeks assistance from Raskin, Novak informs him that the police are also participating in the criminal enterprise. Harry is captured after Novak dies. He does, however, find Novak’s gun, which he used to murder Brandon. Continue reading to find out more about episode 7 in the recap section. What’s ahead for the episode of The Sinner?  There is only ONE EPISODE LEFT of The Sinner. Will Harry reveal the secret that has thrown Percy’s life into disarray? Episode 8 has the most up-to-date promotional materials, including the promo and synopsis, at www.tvacute.com.

‘Part VIII’ is the title of the season four finale of ‘The Sinner’. The episode will center on Harry’s investigation of those implicated in the human trafficking network. Harry is likely to succeed in bringing the scam to light, which could result in the Muldoons’ arrest. We will almost certainly hear more about Percy’s thoughts during her final moments, which may provide closure for Harry.

Only ONE EPISODE of #TheSinner left! Will Harry expose the secret that threw Percy's life off course? Watch the series come to an epic conclusion, Wednesday at 10/9c on @USA_Network! pic.twitter.com/C9LfmaJtai

The Sinner Season 4 Episode 8 will release on Wednesday, December 1, 2021, at 10 p.m. ET/PT on Netflix. The most recent season will include eight episodes, each lasting between 40 and 51 minutes. but the series finale will be 73 minutes long.  Season three premiered in the United States in February 2021 and was released on Netflix five months later, thus UK fans may expect to wait until March 2022 for season four. Filming in Nova Scotia, Canada began in April 2021 and ended in August.

Where can I watch S04E08 of The Sinner Online?

At the given time and date, Season 4 Episode 8 of ‘The Sinner’ will be shown on USA Network. The show can also be streamed on a smartphone or computer by going to the USA Network’s official website or using the USA Network app. The Sinner fans can choose from a variety of services, including Fubo TV, Direct TV, Sling TV,  Youtube TV, and Xfinity Stream. Previous seasons of the show are available on-demand through Vudu, Amazon Prime Video, iTunes, the Microsoft Store, and Google Play. Previous seasons are also available to watch on Netflix.

The penultimate episode of The Sinner picks up just where we left off last week. Harry is recovering at Meg’s house after being rescued from the boatyard, where clearly horrible things are going on. When Harry realizes he can no longer trust the Muldoons, he moves quickly. Based on a forensics report linking Mike Lam to Brandon’s killing, Harry learns through Raskin that Detective Brookes from Portland is preparing a case against Mike Lam. Harry, on the other hand, is adamant that Mike is being framed and that the evidence has been planted.

When Harry meets with the Lams, Stephanie informs him that Mike witnessed Brandon assisting in the smuggling of immigrants into Canada. Stephanie also informs Harry about a man who fabricates false Canadian identification cards. Harry discovers images of the immigrants on the forger’s computer at his warehouse. The man provides Harry with information about the boat that will transport the immigrants to the north. When Harry contacts Emiliana, he discovers that the boat is owned by Verne Novak.

When Harry arrives on the exclusive island where Novak resides, he notices Meg departing. He then kidnaps Novak and keeps him at gunpoint while extracting information about the drug trafficking ring. Harry is compelled to shoot Novak when he attempts to be smart. When Harry seeks assistance from Raskin, Novak informs him that the police are also participating in the criminal enterprise. Harry is captured after Novak dies. He does, however, find Novak’s gun, which he used to murder Brandon. Despite this, Detective Brookes is skeptical of Harry’s theory. Harry makes his way out of the police station and confronts Meg. Meg, who is now focused on preserving the little family she has left, reminds Harry that she wanted him to look into her granddaughter’s death. Harry suffocates the wound with salt: “Colin and Sean have dug themselves a hole with this racket. Percy must’ve figured it out. Who was she supposed to go to for help? It’s possible that’s what pushed her to do what she did.”

While holding Percy’s Celtic star, the one with Percy’s name on it “Someone else died,” he continues, “Valerie” inscribed on its reverse side. Who was it, exactly?” However, his final request to Meg – “Make this right, for Percy” — is received with an unexpected 180 from the woman who had just saved his life in the previous episode: “Let me put it this way. Maybe you’ll figure it out. If you stay, you will be in danger.”