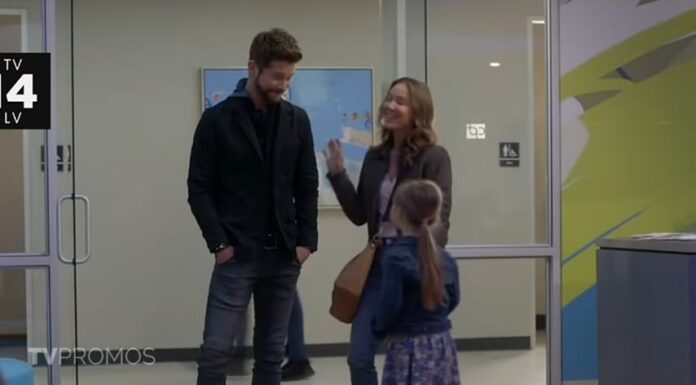 Dr. Conrad Hawkins (Matt Czuchry) is a popular figure at Chastain, and everyone wants him to return. So Conrad declared his return in The Resident Season 5 Episode 7. After seeing the excellent setting in daycare, his daughter, Gigi (Remington Blaire Evans), does as well. But he isn’t the same doctor we encountered at the start of the season or even before The Resident. Kit will be overjoyed. but, with his new objectives, can he find a way to make it work? Continue reading about the episode 7 recap by scrolling down the page. What will happen next?  www.tvacute.com has a promo and exclusive photos for The Resident Season 5 Episode 8 titled “Old Dogs, New Tricks” below. As a result, you’ll be able to mentally prepare yourself for the next episode.

Conrad has to make a significant decision. his dating prospects will be discussed in “Old Dogs, New Tricks.” We have a hard time believing he’ll go through with it right now, mainly because this is the first time he appears to have considered it. We believe it will take more than a few moments for him to truly accept the idea of seeing someone else. on the other hand, Kit will mistakenly believe that Bell and Raptor require assistance in honing their skills. As a result, Kit is going to hire a surgical coach to keep an eye on them. Meanwhile, Devon will be very busy at some point, as he will be spending a lot of his time dealing with an elderly couple.

The Resident Episode 508 Synopsis: BELL AND RAPTOR ARE PUT UNDER A MICROSCOPE – Kit hires a surgical coach to watch over Bell and Raptor and help them brush up on their skills. Upon receiving attention from multiple women at the hospital, Conrad contemplates jumping back into the dating scene. Meanwhile, Devon works with an elderly couple.

The Resident Season 5 Episode 8 will release on November 23, 2021, at 8 p.m. ET on Fox. The fifth season has 23 episodes, each lasting 43–45 minutes. The episodes will also be released weekly, on Tuesdays.   Online Streaming Options; If you prefer online streaming, the episode will be accessible on Fox’s official website and the Fox Now app. Season 5 Episode 8 of ‘The Resident’ will air on FuboTV, Sling TV, and DirecTV. After their release, new episodes can be rented or purchased on Vudu, Amazon Prime Video, Google Play, and iTunes. Also, the first four seasons are available on Hulu.

Devon greets the new Chastain interns, including Trevor, who is already far too arrogant for his own good. Conrad is in the hospital, and he bribes Gigi to help him persuade Kit not to bring him back to Chastain, but Kit has been called away, and Bell is in charge. Bell attempts to get Conrad to agree to just about everything. He begs him to stay for the day, and AJ arrives, requiring Conrad’s assistance because his mother has returned to the hospital. Trevor converses with Billie, and the two appear to get along. He speculates that she may have sought help from a therapist to deal with her problems. Trevor’s attitude and challenge to Devon are rubbing everyone the wrong way. The parents of Leela and Padma are visiting, and Leela is concealing the fact that she and Devon live together. Carol has low cortisol levels, which Conrad discovers, and AJ is relieved. He has already lost his father and does not want to lose his mother.

Trevor is treating a patient who he suspects is suffering from alcohol withdrawal symptoms, but when he inquires about it, she strikes him. Devon dismisses him as a result. Leela and Padma eat lunch with their parents, who are often disapproving of Leela. Trevor apologizes to the patient, undoes her cuffs, and places a bottle in close proximity to her. She drinks and claims to feel better as a result. Carol falls asleep. Her immunotherapy, which is both keeping her alive and causing the failure, has put her in multiple organ failures. Devon informs Trevor that he is no longer a part of the program since he handed her a beer to prove a point. Carol’s immunotherapy must be temporarily halted. She, on the other hand, wants to keep going.

When AJ weeps mourning his mother, Conrad consoles him. At lunch, Leela asserts herself and informs her parents that she, too, lives with Devon. Trevor admits to Billie that he struggled in medical school and that AJ is the sole reason he was accepted for an internship at Chastain. Devon had cut him, he informs Billie. Devon has Conrad speak with Trevor and get a sense of him. Trevor speaks with Carol and tells her the reality of the situation she’s in. Conrad believes he has a chance because of his empathy. Devon gives Trevor another chance. Billie has a conversation with AJ. He claims that he wasn’t the one who suggested Trevor visit Chastain, but she informs him that she knows because he did. Conrad informs Bell that he will return to Chastain.