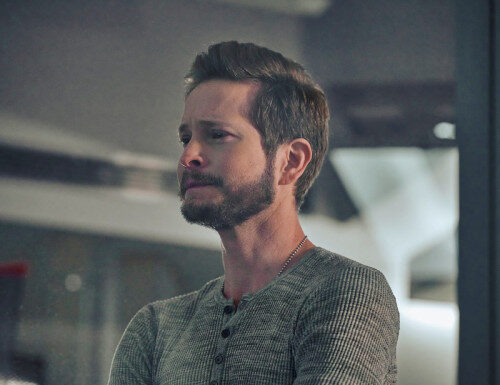 In the previous episode of The Resident, Conrad (Matt Czuchry) is informed of an accident by the cops. Meanwhile, Billie has an unexpected run-in with her son Trevor, who has his friend admitted to the hospital due to an overdose. Billie eventually reveals who Trevor is to AJ. Devon, on the other hand, is poisoned by hydrogen sulphide, which he gets from the janitor’s closet, but he saves Winston and takes care of it himself. He then passes out in the elevator, only to be awoken by a frantic Leela. Kit and Bell finally go on their first date! Then we were left with questions, where will Nic’s story take us? but don’t worry Nic mystery may solve tonight’s episode. The Resident episode 503 titled  “The Long and Winding Road” is going to be the special episode so far.  you can take a glimpse of The Resident episode 503 synopsis, photos, and promo with www.tvacute.com below, which will enable you to understand the episode better. Plus read the episode 2 recap below.

It seems that The Resident season 5 episode 3 will be emotional especially considering where When an accident brings a familiar patient to the Chastain ER. Tonight, Conrad will discover more about what happened to Nic  (Emily VanCamp) , and this may be all about the aftermath. in episode 4, Conrad devotes his every effort to find answers. Raptor has a run-in with the cops that takes an unexpected turn.

The Resident Episode 503 Synopsis: When an accident brings a familiar patient into the Chastain ER, the doctors must face the reality of figuring out how to proceed with the best care, which leads the whole staff to question every decision. Meanwhile, The Raptor and Leela deal with a patient returning with the long-term effects of COVID

The Resident Season 5 Episode 3 will air on October 5, 2021, at 8 p.m. ET on Fox. The fifth season has 23 episodes, each lasting 43–45 minutes. The episodes will also be released weekly, on Tuesdays.   Online Streaming Options; If you prefer online streaming, the episode will be accessible on Fox’s official website and the Fox Now app. Season 5 Episode 3 of ‘The Resident’ will air on FuboTV, Sling TV, and DirecTV. After their release, new episodes can be rented or purchased on Vudu, Amazon Prime Video, Google Play, and iTunes. Also, the first four seasons are available on Hulu.

Fox’s medical drama episode 502 appears to be the genuine start of how nurse Nic will be written out on (Emily VanCamp). But, before her husband, Conrad (Matt Czuchry), receives an unexpected visitor, we need to figure out what’s going on with Devon (Manish Dayal), who becomes a patient after being exposed to a gas. When Leela receives no response from Devon, she becomes concerned. When the elevator breaks down, a janitor is dispatched to the roof floor, where Devon is hanging out of the elevator. A group of students drives erratically while attempting to locate a fellow student who has overdosed. all he cares about is making sure she’s safe. Trevor, the student, tells Conrad about his friend’s theft. Devon is taken to the emergency room. Devon begins to convulse, but they are able to calm him down.

Billie recognizes Trevor in the ER because he is her biological son. Billie urges him to respect her privacy because no one else knows about him. Irving summons AJ to perform a heart scan on the OD patient, who has a heart murmur and refuses to provide details. Devon is still unconscious. Devon had been poisoned by gas, they discovered. He begins to cough up blood. Kit is concerned that this indicates something is poisoning the hospital’s medical personnel and patients, but Bell tells her that he’ll take over wooing the new neurosurgeon she’s trying to recruit. Trevor discovers that his pal underwent a valve replacement and that she had broken her pledge by using drugs. Devon awakens, but he has no recollection of what happened. Billie is irritated that she is summoned to advise Janie when Trevor is there, and AJ notices that they are having an affair. Trevor follows Billie to see if she’ll be okay, and the two get into an argument. When Billie and Trevor get into an argument, AJ has to intervene. He inquires as to how Billie knows Trevor, but she refuses to reveal anything. Conrad and Kit investigate Devon’s actions and retrace his steps until they find a hint concerning radiology and casting. Conrad discovers Winston in the chamber and takes him out, then instructs an orderly to contact Kit and have the basement sealed off. Sulfur Dioxide.

Trevor overhears AJ, Billie, and Irving debating whether it’s worth it to save Janie. he pledges to be her support network to ensure she doesn’t use it again. Winston is being treated badly. Trevor is approached by AJ, who wants to speak with him about Janie. Trevor tells him the truth about his problems with Billie when he inquires about them. Devon pays a visit to Winston, which jogs his memories. Winston’s life was spared when he turned on the room’s vent, which cleaned out the worst of the gas and caused him to pass out on the elevator after striking his head. Bell asks around for references until he finds his buddy Tina, who agrees to give Browner a true assessment. Browner is a liability, she says, and the other hospital is merely trying to get rid of him. AJ mends Janie and assures Billie that he will not judge her or reveal anything to anyone. AJ cautioningTrevor against going down the wrong route with his life. Conrad is at home with Gigi. Instead of Nic returning home safely, Conrad answers his door to two cops. Nic has not been seen since she sent a text saying she was almost there. Conrad is informed of an accident by the cops. Meanwhile, Billie has an unexpected run-in with her son Trevor, who has his friend admitted to the hospital due to an overdose.