Don’t Forget this Sunday; The Equalizer Season 2 Episode 8 is On the Way 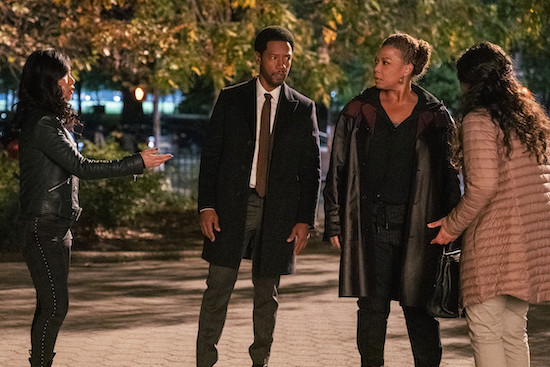 Bishop seeks assistance from McCall, Harry, and Mel in The Equalizer Season 2 Episode 7 when a terrorist from his past discovers the identity of his adult son. Meanwhile, when Aunt Vi received a surprise blast from the past, she became wistful for a past romantic engagement. Delilah, on the other hand, was attempting to come to grips with an insurmountable loss. Was Bishop successful in rescuing his son? Read the recap below. What can we look forward to in the new episode? We’ll have to move on in order to see this. www.tvacute.com provides a promo and a summary for The Equalizer Season 2 Episode 8.

Robyn McCall has been helping people and getting justice for those who need it since Episode 7. There is no doubt that she will keep doing this in Episode 8. It is called “Separated.” McCall and Mel will help a woman who has been deported and lost her son. They were separated when they tried to get asylum in the United States.

The Equalizer Episode 208 Synopsis: –  McCall and Mel help a deported woman track down her son after she was separated from him while seeking asylum at the U.S. border; Mel, McCall, and Bishop exhaust every avenue to get Harry released from prison.

In midseason the final, Bishop has a problem. He was being pursued by someone. He was aware that he was being pursued, so he resorted to his closest buddy, the only person in the world in whom he had complete trust. He shifted his gaze to McCall. He required her assistance. He told her that he had been hacked and that if he didn’t pay, they would reveal details about his well. This individual threatened to make everything public. His official CIA file was included in this. Bishop’s life would be jeopardized if the hacker revealed military secrets. Bishop was keeping a secret from everyone. This secret was so big that not even McCall knew about it, so when he begged for help, he had to come clean. He informed her that he is the father of a child. A son, to be precise. His son’s name would be made public as well, putting his son’s life in jeopardy if his adversaries learned of his file’s sale.

The Bishop’s son is also unaware of his existence. During his years as a spy, Bishop met and fell in love with a woman named Adhara. She was kidnapped and thrown into a terrorist cell. Bishop aided her in her attempt to flee. Something leads to something else. When he took her to the United States, they discovered she was pregnant, and they both realised what was best for their boy. She was already fleeing a difficult position. Adhara didn’t want to be tied down to another difficult circumstance, and she certainly didn’t want her only kid to be tied down to Bishop’s secrets. Bishop left the room. Adhara was the sole provider for her son, and she passed away less than a year ago.

His kid Zaed is completely unaware of his existence. Bishop has never had the pleasure of meeting him in person. He was keeping an eye on him because of his ex, so he went to his son’s apartment for the first time to inform him of the threat. His son, however, was not present. The young man had been kidnapped, and the kidnapper had left his cell phone behind so that he could call Bishop. Bishop had been summoned to a meeting. He did so despite the fact that he suspected it was trapped or that he could be killed, because he didn’t want his son to be hurt, and sadly, he discovered who had taken his son. Hassan Talib, a notorious terrorist, kidnapped his son. Talib was married to the woman Bishop assisted in escaping.

To put it another way, Talib abducted his own stepson. When Adhara ran away, he and Adhara were married. They met in college, married, and Talib’s parents were assassinated. He returned to Syria and became radicalized there. He began to harm individuals and earned the moniker “the Architect.” Adhara couldn’t simply walk away from a man like him. She needed to flee, and Bishop was able to assist her. They had no intention of falling in love or having a kid, yet they did. Talib must have learned about it. He grew to despise the guy who kidnapped his wife and fathered her “bastard” child, and he set out to find Bishop in order to exact his revenge.

Only once he became famous did his plans change. Because Talib was sought in the United States, sheltering in the country wouldn’t work for long. He wished to flee. He was requesting Bishop’s help in escaping, and McCall promised to assist. Harry agreed as well. Mel didn’t want him engaged since they were attempting to resurrect him from the dead, and assisting a known terrorist would jeopardize their efforts. Mel was adamant about not assisting Bishop. She was only outvoted because the others agreed to help, and she accepted it. They made an attempt to save Bishop’s son. They also made good on their promise to get Talib out of the country.

McCall enlisted the help of a friend to get false passports. After this favor, the buddies told Talib she was no longer welcome, but that was fine because they got the passport and McCall phoned a pilot. She managed to get Talib on a plane. They took a flight to Cuba. Talib was planning to disembark without informing his buddies in the United States, so Robin took a chance. She fired a shot at Talib. Using her watch, she sent a warning to Bishop. He was in charge of the rest. Bishop went to the prison where Zaed was being housed and was apprehended. He did so so that he may be taken straight to his son. He then managed to release his son from his shackles.

They were able to flee by using equipment Bishop had hidden on him. They also got away with Mel’s help, and Bishop never told his son about it. He stated he’ll inform him when the moment is perfect. They didn’t have to be concerned about Talib. McCall assassinated him, and the majority of his men were also slaughtered. McCall and his colleagues did an excellent job. McCall checked in with her aunt when they returned to the United States. Her aunt experienced a flashback. Aunt Vi used to be in a relationship with a woman, but it ended because the other party was frightened to come out as gay. Her friend had married a man and had abandoned her. Vi, on the other hand, was contacted by a friend’s daughter. And Vi was too enthralled by the daughter’s words to ignore them. Regrettably, Harry was later jailed for hacking into the CIA’s servers.