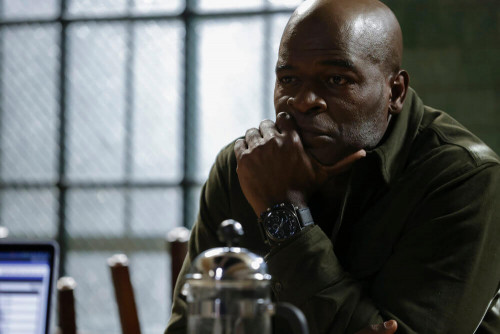 The last episode 8 of The Blacklist Season 9 was solely focused on Donald Ressler’s (Diego Klattenhoff) grief at the death of Liz Keen, but in episode 9, Red (James Spader) and the rest of the task team are back to hunt down a blacklister criminal. The task team is looking into a doctor who is suspected of killing a professional athlete. Meanwhile, Red continues his investigation into Liz’s death, Harold Cooper (Harry Lennix) looks into who is blackmailing him, and Ressler battles with his sobriety. (read the recap below) .Now fans of The Blacklist anticipate new episodes. Check out www.tvacute.com’s spoilers and exclusive photos for The Blacklist Season 9 Episode 9 to get a better idea of the episode.

On Thursday, January 20, The Blacklist season 9 episode 9 will broadcast on NBC, and all indicators point to it being a major one. This episode is called “Boukman Baptiste.” After all, we may soon learn why Dembe left Raymond Reddington’s side after Liz Keen died. We know something happened in Brasilia, but we don’t know what. This could be one of Hisham Tawfiq‘s best episodes ever, and he deserves it.

Following the events of last season, the current season of NBC’s “The Blacklist” took a two-year time leap and spent time filling in what happened to the characters in the interim. When Season 9 of the show premiered, He wasn’t Red’s bodyguard anymore, but FBI Agent Zuma.  It’s time to learn why Raymond Reddington’s (James Spader) right-hand guy Dembe Zuma (Hisham Tawfiq) became a member of the FBI. viewers are about to find out in tonight’s episode. Read continue below.

The Blacklist executive producer John Eisendrath tells EW that “Red and Dembe’s relationship reaches a new low as Red blames Dembe for Liz’s death and Dembe blames Red for the terrible occurrence that resulted in Dembe leaving Red to become an FBI agent. The first peek at the Dembe-centric hour comes courtesy of EW.

There will be one more episode of The Blacklist season 9 in January. there is not going to be another episode at the end of the month. On Thursday, January 27; instead, “The Skinner” will be repeated.

According to sources, The Blacklist will begin airing on Fridays on February 25. The good news is that, because this season is still 22 episodes long, we still have many stories to watch this time around!

How to watch The Blacklist Season 9 Episode 9?

The Blacklist Season 9 Episode 9 will release on NBC on January 20, 2022, at 8 p.m. ET. The season is scheduled to contain 22 episodes, each lasting around 60 minutes. Season 9 of The Blacklist is presently scheduled to premiere on Netflix in September 2022.

Dr. Razmik Maier (Henry Stram) injects a professional tennis player named Sam Rhode (Steven Good) with a medication that kills him in The Blacklist Season 9 Episode 8. Harold has lab evidence that he was poisoned the night Doug Coster was murdered. Red tells Mierce that he’s starting to investigate Liz’s death the night she died. Dr. Razmik Maier is rigging the odds for a sports betting syndicate by causing sportsmen to overdose, according to Raymond. Stella Huang, a nosy medical reporter who is bothering Maier’s clients, is kidnapped. Reddington informs Dembe that he was aware that Dembe had shown his letter to Liz. Huang is drugged and forced to hand over her notes for the antidote, after which Maier abandons her.

Park finds Ressler attempting to grab Huang’s prescription pad while administering CPR. Huang passes away. Huang ate a flash drive whole. Abel Judge, a bartender, dosed Cooper. Mierce’s favourite chef is brought in to cook for her by Red. Raymond is informed by Mierce that continuing to investigate Liz’s death will prevent them from returning to happier times. Park informs Ressler that she is no longer willing to assist him. Aram extracts some information from the flash disc. Maier’s next target is runner Ani Bolin. Athletes from Walker Burgos, a sportswear sponsor, are collaborating with Maier. Reddington can’t let go of his need for vengeance, therefore Mierce is returning home. Bolin is chloroformed by Burgos. Burgos kills Maier after stealing Huang’s notes.

Burgos’ scheme to kill Bolin is thwarted by Park and Aram. However, Burgos persuades them to pursue Maier. Burgos is implicated by Huang’s notes, but Park and Aram arrive just in time to prevent him from killing Bolin. Mierce asks Reddington to stop digging, but she ignores her. Burgos confesses after Aram persuades him. Park informs Ressler that he will need expert assistance to wean himself off the medicines. Dembe receives an envelope with images from Raymond, proving that she was not with Van Dyke on the night Liz died.