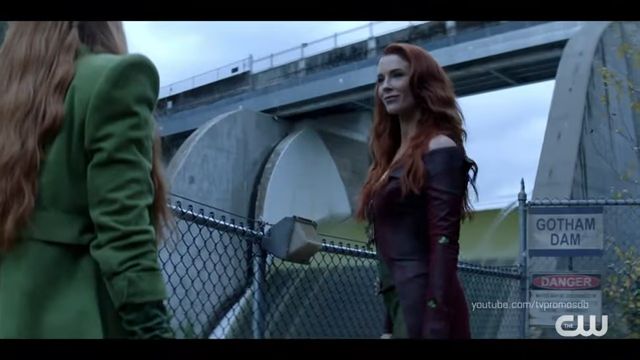 In the previous episode 9 of Batwoman, which included David Ramsey’s John Diggle in his latest cameo. Diggle’s participation in the episode took shape in unexpected ways, and it may have begun to build the basis for Justice U, the upcoming spinoff starring Ramsey. What does the writer have planned for the new next episode?  Are you excited for Batwoman season 3 episode 10 on The CW?  To get a better impression of the episode, check out the promo, and synopsis for the new Batwoman Season 3 Episode 10 below.

“Toxic” is the title of the episode which is going to be an extremely important episode. The promo has been released. Poison Ivy (Bridget Regan) and Poison Mary (Nicole Kang) met in person and joined forces at the end of this week’s episode, according to the teaser. If the trailer is any indication, Ryan Wilder / Batwoman (Javicia Leslie) and the rest of the Bat Team are set to face a huge threat.

Poison Ivy was initially depicted as a passionate, smart scientist with a mind for transforming the world for the better. Her plans changed when she was injected with plant toxins by a colleague, transforming her into the notorious Batman villain Poison Ivy. Pamela used her considerable authority to do what she believed was right, even if Batman and those closest to her disagreed. Poison Ivy has been absent from the board for years, so Batwoman and the Bat Team must prepare for her return. If the trailer is any indication,  Batwoman and the rest of the Bat Team are in trouble.  watch the trailer below.

Batwoman Episode 3.10 Synopsis:-  THE TIES THAT BIND – Batwoman’s (Javicia Leslie) hands are full as she juggles Jada’s (Robin Givens) demands, Mary’s (Nicole Kang) ever-increasing power, and a new romantic entanglement. Loyalties are tested and motives come into question as Batwoman races against the clock to once again save the city and those closest to her.

Batwoman Season 3 Episode 10 will release on Wednesday, January 26 at 9 p.m. ET/8 p.m. CT on The CW . you can purchase it on Amazon Prime Video. Every episode of BATWOMAN will be available to stream on The CW App and CWTV.com the day after broadcast for free and without a subscription, log-in, or authentication required. You can watch it live on YouTube TV, DirecTV, Fubo TV, Hulu+Live TV, or Xfinity. Seasons and episodes are available on iTunes, Google Play, Microsoft Store, Amazon Prime Video, Spectrum, and Vudu. HBO Max has had seasons.

What happend in Batwoman Season 3 Episode 9?

Diggle and Jada Jet (Robin Givens), who appear to have a history as old friends, were featured in part of the episode. Diggle, who was in Gotham for another reason, offered to assist Jada in breaking into the mayor’s office and stealing the joy buzzer that had injured her son, Marquis Jet (Nick Creegan), as a youngster. The true reason Diggle was in Gotham towards the end of the episode was to have Luke Fox (Camrus Johnson) utilise his technology to open the mysterious black box he received in the Arrow finale. Diggle said that he hasn’t been able to open the box since it came, and Luke speculated that the box may require something emotional from Diggle to open it.