Surface Season 1 Episode 7: It Was Always Going to End This Way 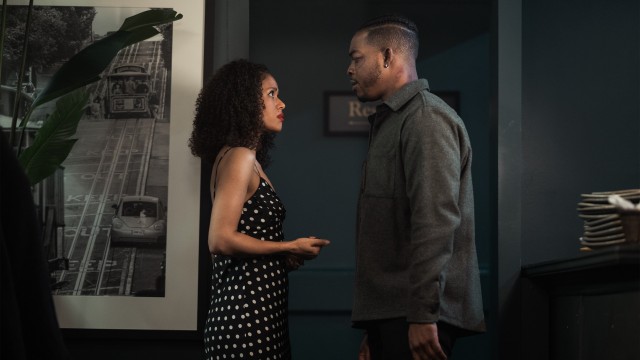 Gugu Mbatha-Raw plays Sophie in the Surface series, which is made by Reese Witherspoon’s Hello Sunshine production company. Sophie has severe amnesia and claims to have survived a suicide attempt. Sophie begins to distrust everyone in her life as she seeks the truth, including her husband, her best friend, the authorities, and most importantly, herself. If you’ve been watching this one, you might be interested in learning when the next episode will air. So, stop wondering now! (tvacute.com) Here is all the information you need for Surface Episode 7, including the air date, time, and location.

It Was Always Going to End This Way is the title of the penultimate episode. Lately, Baden has been fairly quiet. In the upcoming film, I believe he will take center stage. Will Sophie tell him the truth about her scam or will she wait for him to give up the case without learning the truth? Baden can’t be a part of the scam as well, but it’s possible that he knows more than he is saying. James wants to mend fences with Sophie, but she needs to undergo a lot of soul-searching. She recently realized what a horrible person she once was. Will she voluntarily surrender? Or make off again?

Surface Episode 7 Synopsis: Sophie must end the investigation into her own crimes, and she realizes there’s only one explanation left for what happened on the ferry.

Surface’s first season consists of eight 60-minute episodes. The series will then broadcast episodes on a weekly basis, with the conclusion showing on September 2. The Surface season 1 episode 7 will be available to viewers globally on Apple TV+ on Friday, August 26, 2022, at 12 a.m. PT / 3 a.m. ET.

Are you looking for Surface Season 1 episode guide with all the dates for each episode? We have you covered.

Is Surface Available on a Trailer?

What Cast Members Does Surface on Apple TV+ Have?

Top-notch actors from well-known TV shows and films, like The Morning Show, Loki, The Haunting of Bly Manor, The Haunting of Hill House, The Invisible Man, If Beale Street Could Talk, Homecoming, and more, are included in the cast of Surface, which is currently streaming on Apple TV+.

The major cast is listed here:

James outlines all the crucial details that Sophie is currently unaware of due to her memory loss. The twist in this intriguing story comes when Sophie, the innocent victim, is finally shown to be the real offender. What transpired in Surface’s sixth episode was as follows: James reveals to Sophie how they first met and what caused their current situation. James was a junior associate at a venture capital firm and Sophie was a waitress when they first met. James takes Sophie on a tour of his lavish home, but she quickly detects all of his deceptions. She briefly discusses her past, and the two continue to dance all night. Sophie is shown to James’ pals. She makes an impression by speaking frank with a wealthy potential client. She is successful in persuading him to make an investment, which aids James in getting a promotion. Harrison worries about Sophie because of her fictitious identity and hazy past. James argues that he shouldn’t do a background check on her. During the couple’s housewarming celebration, Harrison threatens her.

James’ accomplishments are still a falsehood that Sophie tells. She refuses to stop, despite James’ best efforts. Outraged, Sophie withdraws and has an affair with Baden. James then sleeps with Caroline in exchange. The two decide to attempt to repair their relationship once more after that. James is forced into a shady transaction by Sophie, who orchestrates a protracted deception. She snatches the entire $11.2 million and makes her own getaway. James discovers this plan and unexpectedly confronts her. Even though Sophie is obviously attempting to flee, they argue about how much they love one another. James finds her letter while walking home. He is made aware of her hospitalisation. He begs Sophie to start afresh in the present, but she is concerned about the horrible person she used to be.