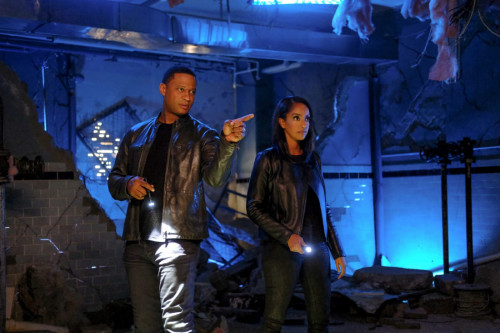 Every episode of a popular series’ final season is a special and essential episode, and Supergirl on The CW is no exception. In last week’s episode 11, sets up the last stretch well by confronting Nia’s guilt and focusing on the battle to stop Nyxly (Peta Sergeant). Dreamer’s character growth is highlighted as she learns to understand her dreams while keeping an honest connection with Brainy. Characters like Kelly played by Azie Tesfai and Lena’s stories seem to have gotten lost in the shuffle. However, the preview for today’s episode seems to finally introduce Kelly in the Guardian armor. It’s a shame Kelly didn’t get more opportunities to suit up and show off her skills. To get to know the new episode 12 titled “Blind Spots” more closely, you can see its photos, promo, and synopsis with www.tvacute.com. Watch the sneak peek below.

There are two major reasons why “Blind Spots” should excite viewers in its final season. First, they get to see Azie Tesfai’s Kelly embrace her new Guardian role (and sporting a sweet costume, too). They’ll also see an episode co-written by Tesfai and directed by David Ramsey (whose John Diggle will be making an appearance). Watch the new sneak peek below.

Supergirl Episode 612 Synopsis: “SUPERGIRL” STAR AZIE TESFAI CO-WROTE THE EPISODE DIRECTED BY DAVID RAMSEY – Kelly (Azie Tesfai) is horrified when the Ormfell building implodes, injuring many in the community, including Joey (guest star Aiden Stoxx). However, her horror quickly turns to frustration when she realizes that the hospital is overwhelmed, people are getting sicker, and no one is coming to help – including Supergirl (Melissa Benoist) who is busy fighting Nyxly (Peta Sergeant). Knowing that she can make a difference, Kelly embraces her power and fully steps into her role as Guardian. Joined by Supergirl, Alex (Chyler Leigh), Diggle (guest star David Ramsey) & team, Guardian leads the way to restoring justice to the fallen community. The episode was directed by David Ramsey and written by J. Holtham & Azie Tesfai

With only a few episodes left and a huge threat to overcome, Lena’s transformation into a witch will be swift and bittersweet for fans who admired Lena as a human among superbeings. Fans of Supergirl will have to determine whether another character becoming a superhuman so close to the end was really necessary.

Supergirl is defended from Nyxly’s blasts by the other 5th Dimensional Imp who comes to her aid against the princess. The two manage to flee and reunite with J’onn and the others, with the exception of Kelly, who is struggling with the aftermath of Nyxly’s destruction of the building. Mxy performs a musical number to the tune of “I Will Survive,” with the words exchanged for Nyxly’s life tale, as he is unable to perform magic without Nyxly tracking him. Mxy accosts Nyxly long enough for Supergirl to free herself and soar to the Tower with him. Nyxly intends vengeance on her father King Brppx by assembling seven magic stones, allowing her unlimited power, as Mxy describes musically.

To accomplish so, she must confine Mxy in a crystal, and if he performs any magic, she will discover him soon. She terrorizes the city first by summoning a gigantic cat, which the Superfriends barely manage to throw into the Phantom Zone, but she then bonds them in front of a Hell Dragon. Imps are incapable of killing, but the Hell Dragon is. By surrendering to Nyxly, Mxy protects them, and they must now find a way to stop her. Nyxly joins Mitch’s assistance after initially dismissing him. Meanwhile, Lena travels to her mother Elizabeth Walsh’s hometown of Newfoundland, led by a photograph of her friends Margaret Bishop and Florence Abbott. There, she discovers that Elizabeth Walsh is regarded as an evil witch who was blamed by Bishop’s daughter Peggy for her parents’ deaths. With Andrea’s help, Lena locates Abbott, who miraculously reveals to her that their coven was unable to control their powers and killed Bishop’s violent husband. Florence informs Lena that she possesses magical skills as well.