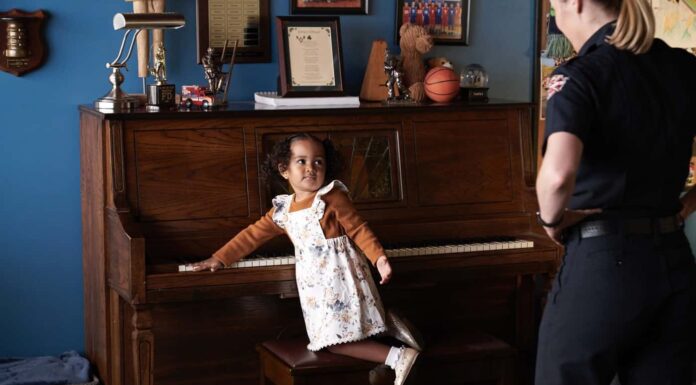 In the previous episode of Station 19, A massive explosion shakes the entire fire station that changes the lives of the firefighters forever. Pruitt, Dean Miller’s (Okieriete Onaodowan) daughter, is cared for by Andy Herrera (Jaina Lee Ortiz). Meanwhile, Lieutenant Theo Ruiz (Carlos Miranda) avoids spending his anniversary with Vic Hughes (Barrett Doss). At the end of the episode, Dean Miller is unconscious. The episode finishes after Ben and Jack perform CPR for 33 minutes. So, here’s Everything we know about Station 19 season 5 new episode 6 so far, including the release date, promo, and photos which can be found at www.tvacute.com.

“Little Girl Blue,” is the title of new episode 5, in which two different stations will get to meet together. Despite the arrival of Thanksgiving, the firefighters will sit down for a mournful gathering. It will be an attempt by the team members to support each other as the tragic aftermath of the neighborhood explosion has left them heartbroken. The firefighters from Stations 19 and 23 will come together.

In the upcoming episode, Vic will finally learn about Dean’s death. how alone Pruitt will become without Dean. However, her grandfather will show up asking to take her away. When Ben told Bailey he’d committed to raising Pru if anything happened to Dean, Bailey was hesitant. It wasn’t that she didn’t care about her. The real question now is who is best for Pru. The courts will look at that. The promo and synopsis for the upcoming episode will give you a good idea of what to expect.

Station 19 Episode 506 Synopsis: Station 19 and Station 23 each attempt to celebrate Thanksgiving following the fallout from the neighborhood explosion; the firefighters come together to cook, toast to loved ones they have lost, and celebrate the families they have become.

‘Station 19′ Season 5 Episode 6 will release on November 18, 2021, at (8:00-9:00 p.m. EDT) on ABC. The episodes are 42-43 minutes long each.  Subscribers to Hulu can watch the show online or live to stream it on Hulu+Live TV. the show is available on Fubo TV, DirecTV, YouTube TV, and Xfinity, among other platforms. You can also buy or rent episodes on Vudu, iTunes, Amazon Prime Video, Google Play, and Microsoft Store.

Vic finds out about her closest buddy Dean’s desire to relocate to Oakland and launch a Crisis One program there. Her love life has also come to a halt as a result of a family curse that has heightened her defenses. However, she is quickly informed of a devastating bomb explosion caused by a pinched gas line. It’s clearly a hypothetical question, but it reveals a lot about Dean’s feelings about Vic. Vic is presently assisting from atop a sky-high ladder after the explosion leveled a residential block. However, she gets electrocuted by a live wire, and Dean rushes to her aid.

Dean and Travis exchange sincere “I love you”s before Dean leaves her in Travis’ care, though Vic plainly does not mean it romantically. Dean discovers a house that has been ripped from its foundation during a neighborhood evacuation. the team notices the likelihood of gas building up within, then the area explodes leaving Dean badly injured. Ben spends the entire way to Grey Sloan performing CPR on him while he is carried. Andy is confident that he will survive, but the situation appears to be bad. She’s already heartbroken at the prospect of Pruitt having no one to take care of her.