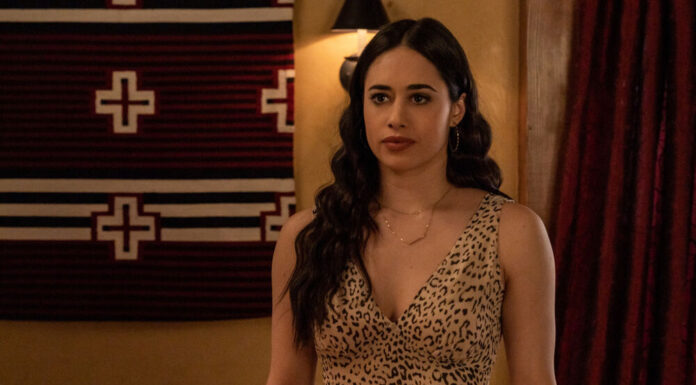 In the previous episode of Roswell, New Mexico Season 3, When Liz kisses Max, she finds he’s Jones! Sheriff Taylor appears and then Jones threatens to shoot her if she does not accompany him. Liz accepts. He makes the four of them go on a drive with him. Dallas gives Kyle a piece of paper with the equation written on it. He admits that his father told him that if they couldn’t separate Max and Jones, he would be responsible for killing Max. To know more about Episode 3.10 read the recap with www.tvacute.com below, which will enable you to understand the episode better. What will come next, Roswell New Mexico Season 3 Episode 11 titled “2 Become 1” will be the final episode before the two-part conclusion. you can check out the photos and the synopsis below.

As the fight to save Max continues, there’s a lot to take in. Furthermore, it is becoming increasingly apparent that the cast is running out of time. When we get to the end of this episode tonight, all that’s left is an epic two-hour finale. This will serve to both wrap up loose ends and define a direction for Season 4’s events.

The episode begins with a flashback depicting Dallas and Heath’s bond. Liz (Jeanine Mason) is taken aback when she sees a shirtless Max without the tattoos in the present day. Heath isn’t returning her calls. She explains that her investigation into how to separate Max and Jones without her tapes isn’t yielding any results. After spending so much time with the Lockhart machine, Michael prepares breakfast for Alex, who tells him that he’s fine. Michael believes the machine has been crying out to an alien named Dallas for the past 47 days, and that this is why it turns on every 47 days. Michael has devised a strategy to place him in front of the machine. Anatsa (Sibongile Mlambo) gets some one-on-one time with Isobel. Anatsa demonstrates how to use a bow to Isobel. When a phone call comes in, they’re about to kiss. Liz approaches Dallas and asks if he can assist her in finding Heath, and Dallas recognizes her as his L.A. lab colleague. He believes Heath is in his family’s cabin in Santa Rosa, and he shares a map with him.

Heath (Steven Krueger)  is nowhere to be found when Liz and Max steal into his family’s cabin. He’s been tormenting Kyle since he’s been with Jones. They notice Jones when Max discovers the jacket Liz bought him at Heath’s. Liz deduces that Jones and Heath are working together based on their handwriting. Max notices Liz’s cassettes in a box and realizes she can beat Jones to the punch with them. Jones utilizes his abilities to figure out where Liz stashed her research bag. Kyle is choked by him. Heath begs him to stop, pleading with him to save his life. Isobel telepathically interacts with Dallas (Quentin Plair), pleading with him not to leave. Kyle sends Liz a text alerting her that Jones and Heath have taken her research bag. She realizes that if Heath solves the equation first, Jones will be trapped in Max’s body for the rest of his life.

Isobel (Lily Cowles) reveals to Dallas that they are both aliens and demonstrates her abilities to him. He had a nervous breakdown. Dallas recognizes the Lockhart machine and confirms he sees it every 47 days when Alex and Michael arrive with it. “Keep that thing away from me!” he cries before getting into his car and driving away. Max and Liz are about to go on a journey to Bandelier University. Jones and Heath have both been to the location. When they uncover a dead woman in the corridor, Max erupts in wrath. Liz assures him that he is not to blame. She persuades him that he is more than a war tool, but Max reminds her that no matter what he does, he would always be pulled to Jones. Isobel adores Max, who Liz describes as the most sincere, kind, and wonderful person she’s ever met. He is adored by Michael. She also adores him. The radio announces that Sheriff Taylor is at the campus just as they’re ready to kiss. When Liz meets Heath and pledges to help him save Dallas, he gives her her research bag, which she uses to finish her research. After that, Max appears, and Liz refuses to leave without Heath.

Alex assures Dallas that the Lockhart machine has been repaired. He claims that the machine’s altered frequency is the source of his neurological illness. Kyle says he’ll try his hardest to figure things out. They activate the machine, and Trey, who turns out to be Dallas’s father, arrives. He describes how the empath, engineer, and he set out to make the world a better place for their children. He hopes Dallas will join them in forming a bond. He’s concerned, however, that someone may come after him in search of the equation, which is being ingrained in Dallas’s mind as they talk. This equation has the ability to permanently decouple the tyrant from all of his warships. He’s not going to let him have it.
Max, Liz, and Heath leave the campus grounds. When Liz kisses Max, she finds he’s Jones! Sheriff Taylor appears and informs Max that he has been tased and handcuffed. Jones forcibly places her gun on her temple and threatens to shoot her if she does not accompany him. Jones demands Taylor shoot herself in the leg, but Liz accepts. He makes the four of them go on a drive with him. Dallas gives Kyle a piece of paper with the equation written on it. He admits that his father told him that if they couldn’t separate Max and Jones, he would be responsible for killing Max.