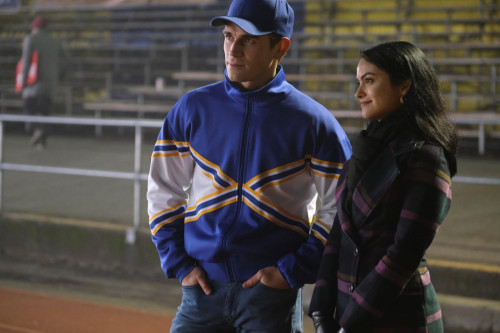 The seven-year leap of Riverdale has also introduced us to the Mothman story with new stories. Jughead and Tabitha are still connected to the mystery. Mothman’s series will continue in the new episode 9 of Riverdale. As the CW has released the Synopsis of Riverdale Season 5 Episode 9 titled “Destroyer”, it is revealed that Jughead finds a student who can help him solve this mystery.

If you want to know more about the new episode 85 of Riverdale, then you can also take a look at some photos and synopsis related to it here.

SCHOOL SPIRIT — After the Bulldogs lose several football games, Archie (KJ Apa) and Veronica (Camila Mendes) come up with a plan to boost school spirit. Jughead (Cole Sprouse) turns his attention to a student who he thinks might need his help. Betty (Lili Reinhart) seeks guidance from Cheryl (Madelaine Petsch) after being faced with a difficult decision to make. Finally, Kevin (Casey Cott) is forced to face a dark moment from his past.

Rob Seidenglanz directed episode 9 which was written by Ace Hasan.

episode 8 is over, the CW has dropped the promo for the next new episode 9 of Riverdale Season 5,

Riverdale season 6 has been renewed. With this, you can find information related to Lily Reinhart’s new project here.

The good news for Lily Reinhart, Star Lily (plays Betty Cooper in Riverdale) will officially start as Natalie in a movie on Netflix’s Plus / Minus. He will once again work as Executive Producer. No release date has been announced for Plus / Minus. Prior to this, she played the lead role in Hustlers, starring Jennifer Lopez. He also produced Chemical Hearts of Amazon. You can read the official Synopsis released by Netflix:

On the eve of her college graduation, Natalie’s life changes into two parallel realities: one in which she becomes pregnant and one must navigate motherhood as a young adult in her hometown Texas, in which she can pursue her career LA for In both journeys throughout her 20s, Natalie experiences life-changing love, devastating heartbreaks, and rediscovers herself.