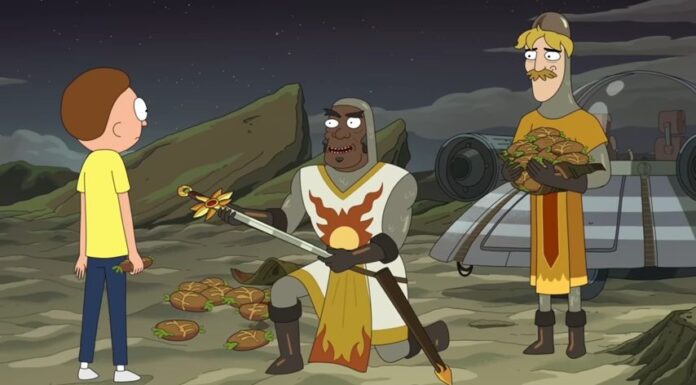 The final two episodes of Rick and Morty‘s sixth season are currently airing, and episode nine of that season had an adventure involving mediaeval knights for Morty! The sixth season began with the unexpected promise that not only would we see more focus placed on the series’ general lore, but that each of the characters would be going through their own periods of growth as they adapted to a new status quo in the wake of the events of the fifth season. However, this has notably resulted in a dearth of Morty stories that go beyond what we saw in the first two episodes.

Rick and Morty Season 6 events may have mostly neglected Morty, but Episode 9 made up for it by placing him front and centre in a brand-new adventure that he really didn’t want to be a part of. But as longtime viewers are aware, that was actually only the first hook in what ended up being a pivotal penultimate episode. (tvacute.com) Here is a summary of all the significant events in “A Rick in King Mortur’s Court”:

While waiting in line for a pop-up restaurant, Rick and Morty argue because Rick is refusing to wait and Morty believes Rick is being selfish. A pair of knights approach them after they drop some food, and after seeing Morty try to get it back, they invite him to join the Knights of the Sun. Because he doesn’t know what they’re about, Morty declines one of them when he offers him a sword. However, the knight who handed it to him ends his life with it when he decides to steal it. Morty is then magically transported to a new location.
As they celebrate Morty being one of the knights, it is revealed after the opening credits that he has been transported to a kingdom on the sun. It is discovered that they can endure the sweltering sun because they are immortal, indestructible, and possess a great deal of freedom to do whatever they like so long as they defend the honour of being the sun. After hearing all of this, Morty quickly decides to join the knights, but he hesitates when they urge him to chop off his privates and hurl them into the sun.

Got our money on Blade sword

Soon after Rick arrives to save Morty, Morty challenges Rick to a duel since he is unable to leave. Rick makes the decision to let Morty do it so that he may leave, and he offers him a sword that has watched the movie Blade and has grown stronger through battle. Morty quickly prevails in the duel and is crowned king of the sun. When they return from their vacation, Morty orders his own trip using his new position, and then he waits for Rick to criticise his choices. But Rick is unwilling to comply. Rick acknowledges how much Morty has devalued him and promises to treat him better from now on. Morty is still being followed at all times by the other knights. The remainder of the Smith family tries to explain what they mean, but due to their poor understanding of science, they are unable to make any sense of it and quit their employment. The Knights of the Sun, however, quickly lose hope and surrender up as Morty pushes a final time.

It soon becomes apparent that various knight orders from other worlds are invading the sun and attacking it as it spirals out of control. Rick makes an effort to support Morty’s choice during this journey, and when Morty is unable to persuade the other orders to relent, they attempt to engage in conflict with him over the sceptre of the sun in an effort to overthrow him and take control of the universe. This starts a massive conflict between the planets in which they compete to possess the sun’s sceptre. With improvements in magic, weapons, and other areas, the planets struggle over who will acquire the sceptre. It imprisons Rick and Morty on Earth as they work to defend it, and despite Rick’s best efforts to help, Morty can’t help but wonder if this is some sort of prank on Rick. As a result of Rick’s explanation that he is merely trying to be supportive of Morty, Morty makes another attempt to enlist the Knights of the Sun. But it quickly becomes clear that all of the knights have developed heroin addictions, and it turns out that their impenetrable bodies prevent them from overdosing. When they reject him, Morty offers to cut off his privates as a way to persuade them to support him.

Rick offers Morty fake privates to get him out of this problem after he begins to cry about having to cut off his privates. Once the knights of the sun are once more involved, each knight quickly decides to put an end to their conflict. Morty needs to sever his privates in order to seal the deal. He must enter a machine to demonstrate its validity before entering two more when they recognise his false privates. As all else fails, Rick telepathically communicates with Morty (using his science), and the two of them attempt to flee the area. Before diving into the lava, he tells Morty that he is proud of himself for attempting to figure things out on his own. They then declare their love for one another. It becomes obvious that the knights just performed another Vat of Acid ruse when they recount what happened next. However, after checking on society, it is discovered that everything has improved. After the credits, the person who was giving Rick snacks was detained. It turned out to be a significant hot dog trafficking ring component.