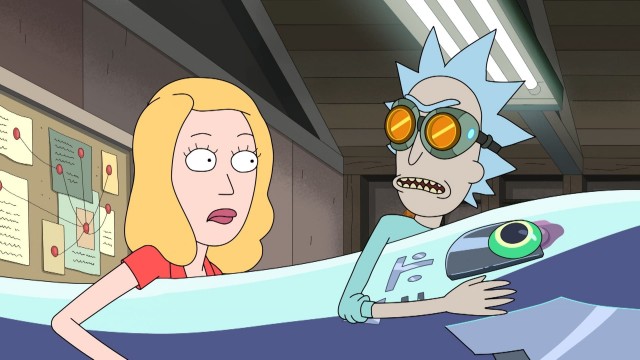 The third episode of Rick and Morty Season 6 has officially aired, and viewers are still trying to figure out who Beth’s new love interest is. The first two episodes of the show’s sixth season have been examining what all of the changes in Rick and Morty’s relationship might mean for the show’s future. so episode 3 was a major shock when it turned out to be a barely disguised Thanksgiving special. It was hinted that we would see a lot more of Space Beth, and the most recent episode more than delivered when it turned out that the two Beths have a lot more in common than they first thought. Much, much more. In fact, it was such a shocking revelation that viewers are still in shock at their romantic relationship in Season 6’s most recent episode! For a detailed explanation of everything that transpired in “Bethic Twinstinct,” the sixth episode of Rick and Morty, continue reading at tvacute.com.

Rick appears as a huge turkey at the beginning of “Bethic Twinstinct.” When Morty gets a new console for video games that is supposedly more realistic, he is overjoyed. Rick, though, has doubts about the game. Space To celebrate Thanksgiving with the family, Beth has arrived. Jerry suggests a toast as the family sits around the dining room table.the two Beths are traveling into space to get ice cream, but when they return empty-handed, it becomes evident that this is more than just a typical friendship between two individuals who share the same DNA. when Beth and Space Beth start dating, After dinner, Rick and Morty find a new way to solidify its position as the most bizarre in history. they play a video game together, which is incredibly unsatisfactory. Beth and Space Beth converse about their lives in the meantime. They rapidly fall in love since they are a reflection of one another. Space Over the weekend, Beth and Beth have a hookup. Because of this, Rick, Morty, and Summer are aware of what is taking place between the Beths and use the video game to pass the time. Summer and Morty turn to hyperreal video games to escape the gut-wrenching misery of My Two Moms.

Jerry,is unaware that Beth is cheating on him. Jerry, however, changes into a Pill Bug when he discovers that Beth is having an extramarital affair since Rick implemented a protocol to prevent Jerry from acting in a self-destructive manner. Beth wants Rick to remove the memory of her relationship from her and Space Beth’s minds after realizing that she still loves Jerry. But Jerry transforms back into a person and speaks with the Beths before Rick can wipe their memories.  Viewers are treated to a strange yet intriguing relationship between Beth and Space Beth in this episode. After cloning Beth, Rick created the two, who are virtually the same person. They are therefore more capable of making one another pleased than Jerry is. As a result, they have fantastic chemistry and spark. It is clear that the two cannot coexist, though. Despite her desire to Space Beth, Beth still wishes Jerry to be her husband. In the climactic scene of the show, Jerry speaks with Beth and Space Beth. He suddenly starts acting assertive, which creates an intriguing bedroom dynamic between Space Beth, Jerry, and Beth. Jerry acknowledges that, as long as they ask his permission, he gets a kick out of watching the Beths together. The trio ends up being a threesome. Summer, Rick, and Morty feel compelled to ignore the embarrassing sex chat coming from the adjacent room. Space Beth returns to her existence in space after Jerry, Beth, and Space Beth work out their differences. While Jerry and Beth are still together, they could be willing to try new things in bed.

If you look closely, you can see a tiny Morty floating around in one of the bottles in the Smiths’ liquor cabinet like a tequila worm. After the Sanchez/Smith family has finished their Thanksgiving meal, Rick is seen putting the Venusian wine back in his hidden cabinet. In order to prevent future access, he also burns the remote control for the cabinet. Rick’s actions suggest that the Venusian wine is what caused Beth and Space Beth to fall in love and have an affair. The wine, which was presented to the women during supper, probably contains properties similar to those of a love potion. Rick probably sees a chance to get rid of Jerry after hearing Jerry’s speech about killing himself if Beth betrays him. As a result, Rick gave the Beths the wine, which started their relationship. Rick, however, decides to discard the wine and the container’s other contents after witnessing his scheme end Beth’s life and their marriage.