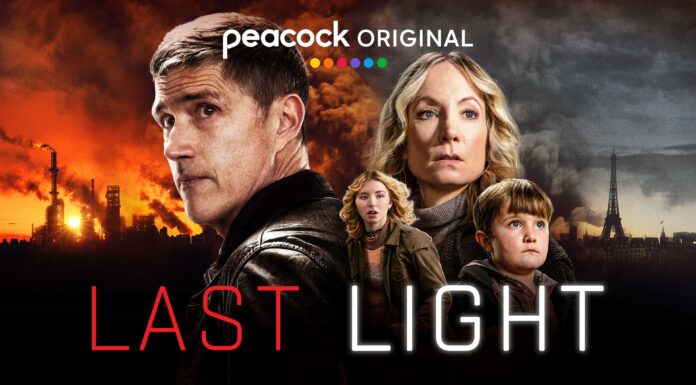 Peacock‘s upcoming movie Last Light, is based on Alex Scarrow’s best-selling apocalyptic novel of the same name. Dennie Gordon, who played Jack Ryan, is in charge of directing all five episodes and producing the movie. Read article at tvacute.com to know about Last Light Season 1.

On Thursday, September 8, all five episodes of the limited series will come out on Peacock.

The official trailer for Last Light, Peacock’s next disaster thriller limited drama series starring Lost’s Matthew Fox, has been released. The Last Light trailer, which you can watch below, shows how a global oil crisis is about to start as a post-apocalyptic event. Andy Yeats, an expert, says that chaos will happen if his theory that the world’s oil supply is going down is proven to be true.

The synopsis says, Petro-chemist Andy Nielsen knows how dependent the world is on oil; if something were to happen to the world’s oil supply, it would set off a chain reaction: transportation would grind to a halt, supplies would cease to be delivered, law enforcement would be overwhelmed. While on a business trip to the Middle East, Andy realizes that his worst fears are coming true and his family is separated at this crucial moment. His teenage daughter, Laura, is alone at home in London while his wife, Elena, and young son, Sam, are in Paris. Amid this chaos, each family member will sacrifice everything to find one another, despite the distance and the dangers that separate them.

Fox, William Choi, Sydney Gallonde, Rikke Ennis, Patrick Renault, Diego Piasek, Patrick Massett, John Zinman, Rola Bauer, and Steven Johnson are among the people who are in charge of making the miniseries. Veronika Lencova and MGM International Television Productions, along with Peacock, Viaplay Group, MBC, and STAN, are the people behind the show.