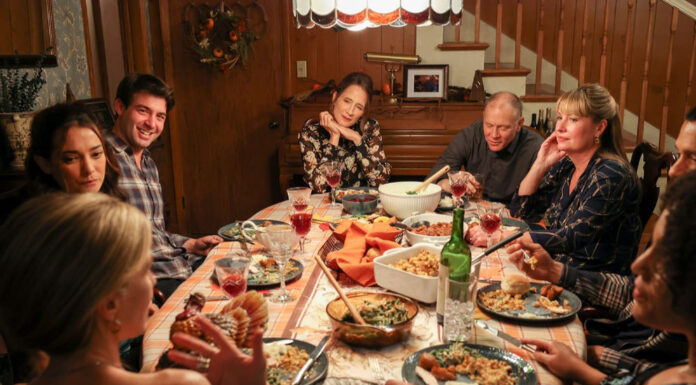 The previous episode of Ordinary Joe, Bobby’s death has left Amy distraught. We witness flashbacks of her as a young teen participating in protests.  Cop Joe tries to mend his friendship with Frank, but he accuses him of being the reason for his suspension.  Nurse Joe persuades Uncle Frank to go to rehab because he doesn’t want to lose him as well.  To learn more about the new series, Ordinary Joe eps- 8, read the recap below from www.tvacute.com, which will help you understand the episode better.  Tonight’s episode will be the fall finale episode called “Thankful”. What occurs in  Ordinary Joe episode 9, “Thankful.” The three Joes each have their own concerns with Thanksgiving dinner. We’ll have to move on in order to see this.

It’s Thanksgiving in Joe Kimbreau’s universe. All three Joes will have unique experiences, but none will be easy. Music Joe will struggle to find gratitude. Amy revealed her affair to him in the previous episode. She didn’t trust Joe, so she slept with another. But Music Joe won’t sabotage Amy’s campaign. Will he pretend to be with her until she wins, then end their long-suffering marriage?

Meanwhile, Nurse Joe and Jenny separate for the first time. This Thanksgiving, Jenny is away from her family for school, not juggling Christopher between them. They’ll hire help to deal with the matter. What are the possibilities Joe’s mother ends up doing a lot? She adores her grandson and only wants the best for him, therefore she will be there.

Then there’s Cop Joe, who’ll have to deal with recent decisions. The other cops aren’t on his side, and Frank’s involvement in the Diaz case will cause tension in the house. It will undoubtedly be a rough Thanksgiving supper. In two timelines, Joe had a bad day with Uncle Frank while Eric and Amy reunited. Why would Nurse Joe identify Chris’ godfather Uncle Frank if he was so drunk? He had no idea about Chris’ condition and merely wanted to piggyback him.

Ordinary Joe Episode 109 Synopsis:  Cop Joe navigates a tense Thanksgiving dinner with his family; Music Joe battles his feelings of betrayal in order to help Amy’s campaign; Nurse Joe and Jenny decide to hire outside help for Chris as they prepare for their first Thanksgiving apart.

‘Ordinary Joe’ Episode 9 will release on Monday, November 22, 2021, on  NBC at 10:00 PM – 11:00 PM on Each episode should be around 45 minutes long. Ordinary Joe Episode 6 Online Streaming Options – If you have a cable subscription, you can watch ‘Ordinary Joe’ episode 6on your TV. Simply tune into NBC at the above time and date to see the series premiere. After its broadcast, the episode will be available on NBC’s official website and mobile app. Those without a cable subscription can watch the episode on Hulu Live TV, Xfinity, YouTubeTV, Fubo TV, and DirecTV. These include Google Play, Spectrum, iTunes, Amazon Prime Video, YouTube, and Vudu. The series will also be available to Hulu subscribers.

Bobby’s death has left Amy distraught. We witness flashbacks of her as a young teen participating in protests. Jenny offers Amy a 90-second heads-up that the feds are on their way to search her home. On Cop Joe’s desk, someone scrawled the word traitor. Joe is in therapy, upset by the changes in his relationship with Frank. He’s been given permission to return to work. Bobby’s funeral is Amy’s responsibility. She found out she’s a congresswoman after Regina declined the position. Eric delivers Bobby’s watch to her as she finishes writing Bobby’s eulogy, claiming the hotel found it in Amy’s room. Amy arrives at Nurse Joe’s and expresses her worries about having a drunk Uncle Frank in his life. Frank storms into Chris’s room and immediately begins coughing up blood. Amy is going to look after Chris for the day. Amy and Eric try to distract Chris by playing Jenga with him, but he still wants to know why Uncle Frank continues to drink. Amy compares it to getting a headache from playing video games.

She and Eric enjoy spending time with the children they choose to adopt. Uncle Frank is taken to the hospital by Nurse Joe. Dr. Banks is sympathetic and offers to examine him. He even offers to send him to rehab, stating that he wants a new beginning with Joe. Cop Joe tries to mend his friendship with Frank, but he accuses him of being the reason for his suspension. Amy has a reputation for being a homewrecker, and the feds have demolished her apartment. Amy and Joe agree to a fresh start, and she commits to staying with him. Nurse Joe persuades Uncle Frank to go to rehab because he doesn’t want to lose him as well. Amy delivers Bobby’s eulogy, during which she discusses the significance of Bobby’s watch and time, before placing it in the casket. Regina says she knows Amy and Bobby had an affair as she and Regina hug. Now is the time for Amy to tell Joe about her affair.