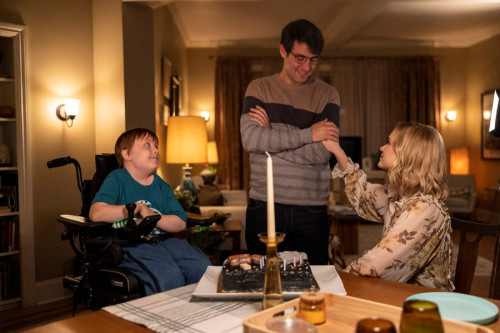 In ‘Ordinary Joe’ episode 2, We discovered a lot more about Joe’s family background, including the fact that he was the father of Jenny’s son, Lucas. Was anyone taken aback? Jenny’s husband became concerned about her working with Joe Kimbreau (James Wolk). Cop Joe and Nurse Joe, in particular, battled with their father’s loss and the 20th anniversary of September 11th. We learned why family honor was essential to fifth-grade Joe and why he blamed himself for his father’s death through flashbacks. Now fans are eager to what happens next episode. Jenny’s birthday will be celebrated in some way by all three Joes. Nurse Joe wants to make it especially memorable for her. Jenny (Elizabeth Lail) hasn’t mentioned that she will relocate to Atlanta for a year,  Will any of the birthdays be memorable? How many mysteries will ultimately be revealed in this episode?  Here’s (www.tvacute.com) everything you need to know about Ordinary Joe Season 1 Episode 3 titled “Happy Birthday Jenny”, including the promo, release date, and photos.

‘Ordinary Joe’ Episode 3 on NBC at 10:00 PM – 11:00 PM on Monday, October 4, 2021.  Each episode should be around 45 minutes long. Ordinary Joe Episode 2 Online Streaming Options – If you have a cable subscription, you can watch ‘Ordinary Joe’ episode 2 on your TV. Simply tune into NBC at the above time and date to see the series premiere. After its broadcast, the episode will be available on NBC’s official website and mobile app. Those without a cable subscription can watch the episode on Hulu Live TV, Xfinity, YouTubeTV, Fubo TV, and DirecTV. These include Google Play, Spectrum, iTunes, Amazon Prime Video, YouTube, and Vudu. The series will also be available to Hulu subscribers.

Rockstar Joe apologizes and gives Amy breakfast in bed. They reconcile. Chris wants to attend a September 11th memorial service. Joe is avoiding the ceremony because it is Jenny’s birthday. Cop Joe is promoted to the rank of detective. Rockstar Joe was asked to perform at the 9/11 Memorial and Museum. He asks Uncle Frank to look for his kid, who has gone missing. Uncle Frank thinks it’ll be difficult without the bio mom’s permission, so Joe says he’ll go see Jenny later when Amy isn’t so busy. Cop Joe and Uncle Frank are going to question the congressman’s assailant. They talk about why Joe hasn’t married yet while driving. He doesn’t want anyone else to have to go through what his mother did. Joe overhears the suspect that Bobby Diaz destroyed his family at the hospital. Jenny refuses to help when rockstar Joe approaches her. With a spouse and children, she has a new life.

Cop Joe seeks Jenny’s assistance in tracking down information about the suspect’s connection to Bobby Diaz. Jenny’s husband is concerned that Joe will discover he is the biological father of her kid, Lucas. Nurse Joe is still attempting to flee the September 11th memorial. He keeps experiencing visions of his father’s final days. His mother persuades him to go, and he and his son Chris read the victims’ names. Amy informs Rockstar Joe that she has decided to run for politics and that she does not require the help of her children. Jenny was awarded a grant to complete her legal degree, but she would have to relocate. Rockstar Joe phones Uncle Frank in the cliffhanger, asking for help in finding his son. Just before Eddie Diaz arrives at Amy’s door, Cop Joe texts her, stating he had a fantastic time.