Are you ready for back-to-back episodes! NCIS: Los Angeles Season 13 Episode 18 and 19 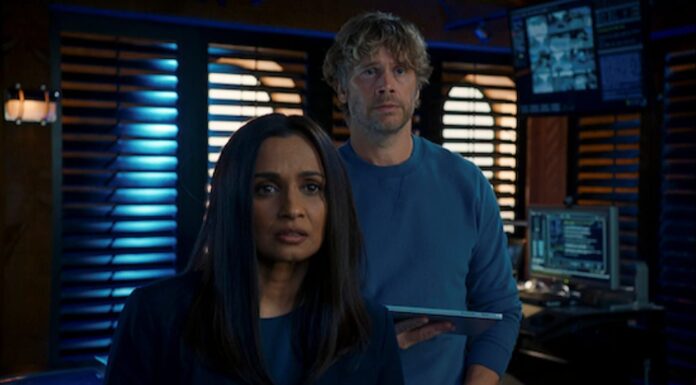 In back-to-back episodes of NCIS: Los Angeles, the team investigates the murder of a woman who worked in the Navy’s missile defense program and then collaborates with DEA Agent Talia Del Campo (Mercedes Mason) to locate a missing whistleblower. The good news is that it was renewed in March, so we already know it will return for a 14th season.

The only difference between NCIS: Los Angeles Season 13 Episode 17 and previous episodes was that this time Callen was not willingly removed from the team. The aim of the case of the week remained unclear, save from maybe establishing another villain in the background this late in the season and possibly finding a romantic interest for Fatima. (Read recap below)Do you want to know what is ahead in NCIS: Los Angeles? To discover out, we’ll have to dig a little deeper. (www.tvacute.com) Here’s all you need to know about Season 13 Episodes 11 and 19 of NCIS: Los Angeles, including the trailer and release date.

NCIS: Los Angeles Season 13 Episode 18 and19 Spoilers
Tonight! CBS will air two episodes of NCIS: Los Angeles. In the first episode titled “Hard for the Money” (8:00-9:00 PM, ET/PT) we’ll begin the night with the team investigating the assassination of a lady who worked for the Navy’s missile defense program. The technology behind Navy missiles has been stolen yet again. this is something that happens frequently.

The second episode, titled “Live Free or Die Standing,” (9:00-10:00 PM, ET/PT) was written by Eric Christian Olsen (NCIS Investigator Marty Deeks) and directed by Daniela Ruah (Special Agent Kensi Blye), and it highlights a different type of collaboration amongst the show’s agents. Callen and his partner Sam Hanna were right in the middle of the action in the latest NCIS: LA episode, “Live Free or Die Standing.” Despite the fact that the two are constantly in jeopardy, there’s no hint that Callen will be killed off. Season 13 of NCIS: L.A. has only a few episodes left, but Callen still has a lot of work to do before the season finishes.
NCIS: Los Angeles Episode 13.18 Synopsis: NCIS investigates the murder of a woman employed in the Navy’s missile defence program and its connection to stolen Navy missile technology; a strict social worker stresses out Deeks; Sam debates selling his boat.
NCIS: Los Angeles Episode 13.19 Synopsis: NCIS investigates after two men are blown up by their own explosives while attempting to break into a military base; Callen wants to take the next step with Anna; Sam moves in with his father.

NCIS: Los Angeles airs on CBS on Sundays at 9 p.m. ET/PT. However, starting at 8 p.m. ET/PT tonight, there will be back-to-back episodes. NCIS: Los Angeles Season 13 Episodes 18 and 19 will release on CBS on May 1, 2022. It will be available to watch online on CBS’ official website or Paramount+. You can also watch the upcoming episode on iTunes, Vudu, Google Play, YouTube, FuboTV, Amazon Prime (with a Paramount+ subscription), DirecTV, YouTube TV, Hulu + Live TV, Spectrum, and Xfinity’s VOD and Live-TV platforms.

While watching Katya’s DVD, Callen falls asleep and flashes back to his own training. Despite the fact that they are moving, Anna advises Callen to take a step back for a bit. Kilbride informs Callen that Callen’s deep fakes have created hundreds of improper videos and communications. Kilbride has been ordered by Vance to take Callen off the field until the deep fakes stop. Maria Varza, a foreign asset recruiter for the CIA, has gone missing. Her supervisor, Akhil Ali, has asked NCIS for assistance. Nate arrives to see how Callen is doing. Callen enlists his assistance in locating Pembroke, a man he recalls from his training. Varza was recruiting Dr. Jarrahi, so Fatima went incognito to speak with him. Callen’s Drona Project was based on the Institute for Noble Maidens, according to Kilbride. Jarrahi and Fatima have a strong friendship. Kensi and Deeks discuss how they can assist Pilar. Callen tells Leah the truth about why he felt drawn to her, and she is not pleased. Fatima and Jarrahi are being pursued by the two men who are tailing Varza. Fatima pushes Jarrahi too hard, causing her secret to be blown. The two men are taken out by her and Sam. Nate is informed by Callen that Anna has moved out due of his infatuation with Katya. Callen gets a call from Leah, who has a lead on a plant trader named Arnold Baines. Callen remembers himself as a child. Callen addresses him in Russian, but Baines is uninterested. Varza is discovered delirious a mile from her home. Kilbride has been given the order to free the two Iranians. Fatima and Ali share a meal after their fast. Kensi is on the phone with Rosa. Nate isn’t convinced that Baines is Pembroke, the film’s protagonist. Callen makes his way back to Baines’ residence. Anna calls to say she’s changed her mind and would like to live with you. Callen is too late to see Baines’ security camera.