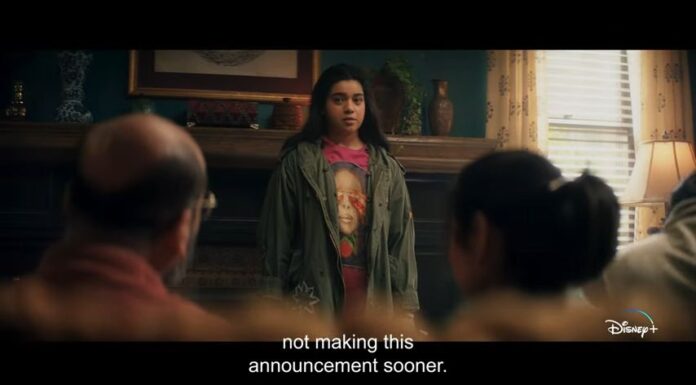 In the Marvel series, 16-year-old Kamala Khan, an ardent admirer of the Avengers, discovers she has superhuman abilities. Iman Vellani, Yasmeen Fletcher, Matt Lintz, Mohan Kapur, Zenobia Shroff, Saagar Shaikh, Azhar Usman, Laurel Marsden, and Rish Shah are among the many actors who appear in this Bisha K. Ali production. It debuted on June 8th, 2022. The fifth episode went into the past and answered questions regarding what became of Aisha as well as how Kamala obtained her powers. This episode also revealed how Kamala obtained her talents. As Kamala works to overcome all of the challenges that stand in her way, the conclusion is going to be jam-packed with high-voltage action, drama, and feelings.

The first five episodes of Ms. Marvel have been a lot of fun, and judging by the preview for the sixth and final episode, it appears that the conclusion will be just as entertaining as the earlier episodes.

In the trailer for the sixth episode of Ms. Marvel, Kamala Khan tries to tell her family her big secret, but there’s a twist in the tale. MCU series Ms. Marvel will come to a close with its sixth and final episode on Wednesday, and Marvel has provided fans with a sneak peek at what they can anticipate from the show by releasing a 56-second clip from the episode. We get a glimpse of Kamala Khan, played by Iman Vellani, as she prepares to break some news to her family in the promotional video. [Watch it below]

She begins by expressing regret for not being able to tell the Khan clan earlier, and then she tries to introduce herself as “the Light Girl” to them. As soon as Khan learns that her mother Muneeba Khan (Zenobia Shroff), who learned of this in Karachi, failed to keep the information to herself, she quickly realizes that everyone already knows her great secret.

Episode 6 of “Ms. Marvel” was directed by Adil El Arbi and Bilall Fallah, who were also responsible for the pilot episode of the series.

Is there Ms. Marvel Season 2

It should come as no surprise that the specifics of the storyline for Ms. Marvel episode 6 are being kept under wraps; nonetheless, it may provide us with a clearer picture of whether or not Ms. Marvel season 2 will actually be produced. Since March, when sharp-eyed fans saw the words “Season 1” on a wrapped gift for crew workers, speculation has been circulating that Ms. Marvel will be renewed for a second season. However, nothing has been decided for certain. Naturally, there are already plans in place for Kamala to become a member of The Marvels. The 2023 movie The Marvels, in which Vellani will reprise her role alongside Brie Larson, Teyonah Parris, and Samuel L. Jackson, will use Ms. Marvel as its backdrop.