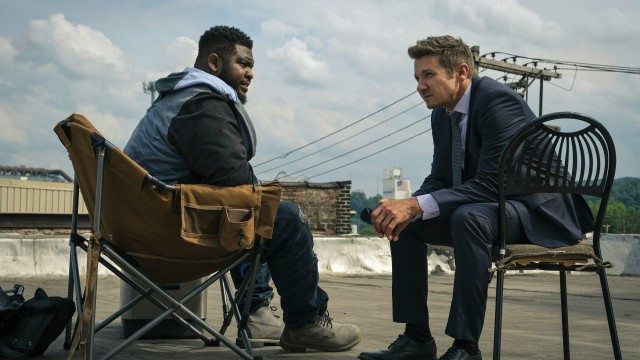 The critically acclaimed first season of the drama Mayor of Kingstown, which is produced by Paramount+, came to an end with the character Mike (Jeremy Renner) and his brother, Kyle, emerging from the prison riot and being immediately embraced by their mother. Mike McLusky, a power broker, is also making a comeback following the aftermath of a riot. Mike, the unofficial “mayor” of a prison town in Michigan, spends Season 2 of the Taylor Sheridan and Hugh Dillon thriller trying to contain the turmoil. He makes a hazardous agreement with the leader of the Crips gang, Bunny (Tobi Bamfeta), while also searching for the Russian mob prison escapee Milo Sunter (Aidan Gillen). If you’re seeking explanations of the first episode of the second season of ‘Mayor of Kingstown.’ tvacute.com provides everything you need to know!

Mike pays a visit to Iris (Emma Laird) at her hiding place. Iris is in hiding at Mike’s cabin. Following the difficulties that the young girl has endured as a result of her connection with the mob, Mike provides Iris with a peaceful experience by taking her on a boat. he takes  boat with Iris blindfolded Iris is informed by Mike that the boat will soon be put up for sale. However, Iris asks Mike if she can stay on the boat until he sells it because she believes that being outside in the fresh air is beneficial to her mental health. Captain Kareem Moore (Michael Beach), one of the prison guards and officials who witnessed the atrocities committed during the prison uprising, is suffering from post-traumatic stress disorder. After waking up to an empty bed, his wife goes down and discovers him hiding in a closet, where he screams in panic. She tries to reassure him that they are in a safe place.

After the jail was destroyed in season one, the prisoners were moved to a makeshift outdoor facility, where we first see them living in big tents with toilets. The conditions are cramped and dismal, and guards no longer intervene when fights break out. They do nothing but watch, while Mike narrates in the background, explaining that in the aftermath of riots, new leaders will emerge among the prisoners. The outcome is anarchy both on the streets and in prisons.  In the morning, Mike has leave for work, but Iris would rather spend the day relaxing on the boat. Hugh Dillon’s Ian and Derek Webster’s Stevie are at the scene of a shooting. Ian contacts Mike to come help. A Pit Bull has gotten inside one of the vehicles and is currently feasting on one of the victims, and nobody knows what to do about it. As Mike approaches, he shoots several shots at the dog.

Mike is dissatisfied to find that Bunny’s cookhouse was raided by the police. He was ordered to the ground before his kitchen was ransacked by the police. Robert and his SWAT team carry out a raid at the same time, during which they are successful in seizing a drug shipment. An unsuspecting black adolescent emerges from the hideout in a surprising turn of events. The boy does not present any kind of danger to the SWAT team; however, he is still mercilessly shot to death.  Once again, Miriam (Dianne Wiest) is teaching female inmates, but things have altered drastically. Many armed guards are present in the room with her.  there are clear signs that violence has occurred in the prison previously. she left.

Captain Moore tells his psychiatrist that he is grateful for his life. Moore still denies he was the victim of sexual assault. His only desire is to get back to work and support his family. After Moore reassures the doctor that he isn’t out for vengeance, the doctor gives him the green light to return to work. Mike pays Bunny a visit and has a conversation with him about the process of bringing peace and order back to the prison. Mike explains why the authorities raided his cookhouse. They were tipped off by Blood, but the police had no idea it was Bunny’s. Bunny reveals that they are unable to select new leaders because all the qualified candidates were killed in the raid. Along this, He is not interested in the struggle for power and is instead focused on safeguarding his drug enterprise.

After that, Mike has a meeting with Ian, Stevie, Carney (Lane Garrison), and Robert (Hamish Allan-Headley). Carney says the convicts are wilting in the heat, and the Mexicans appear ready to seize power. Mike is frustrated by all the raids on the kitchens, but Robert insists that it is his duty to do so. Mike argues that Bunny is the only sane person. Mike cautions Ian to back off for a while so the situation can calm down. Ian is in agreement. The topic shifts to Milo, and it seems they only just now discovered he’s missing.

Kareem was returned to prison.  Carney and two other Corrections officials are hiding behind some portable toilets with three detainees who are tied up, kneeling, and wearing sacks over their heads. Kareem exacted his vengeance on a group of other inmates for the attack that had been committed against him. Mike visits Assistant D.A. Evelyn Foley (Necar Zadegan). she says they are continuously finding bodies. Whatever Robert did to save Kyle, it doesn’t matter in Mike’s eyes. Kyle has relocated to the state of New York for work. She concedes that none of the unidentified bodies seem like Milo. Mike is confident, though, that Milo simply left the prison without anyone knowing. Mike returns to the boat to get Iris as quickly as possible. If Milo manages to get away, he’ll start looking for her right away.

Sometime later, Mike sees the elderly guy affix a message to a pigeon and release it. In roughly four hours, the pigeon will arrive at the man’s son’s home in Detroit. He and his son often miss phone calls but never pigeons. As the title indicates. A group of federal agents who have come to set up a safe house for Iris interrupts their conversation. They will transport Iris to a nearby temporary safe home, but Mike isn’t allowed to come. Iris refuses to leave Mike’s car. Mike is adamant that he can get her set up with a new identity so that she can go back to school and begin a new life. Iris is sad because she can’t contact him. The team takes Iris away to a safe place.

At the same time, Miriam makes a quick stop at a convenience store on the way back to her house. However, a young pickpocket attacks her and takes her purse. In the ensuing struggle, Miriam is injured, but she lets the robber get away with the money from her wallet even though she is being pursued.  Meet Kyle (Taylor Handley) his first appearance as an MSP officer. he following a smuggler with his team. A disagreement arises between Kyle and his new superior as a result of the misinterpretation of an intelligence tip that led to the operation against a ship transporting maple syrup. The strategic failings of Kyle’s new team have Kyle feeling frustrated and angry. Smugglers in this region primarily import Canadian maple syrup, rather than drugs. They’re merely looking for ways to save money on the tariff.

Miriam is informed by Ian that the man who mugged her has been arrested a short distance away. The police will be charging him with armed robbery. They transport him to Miriam. She doesn’t want her assailant punished and doesn’t want to go to court. In the safe house, Iris overhears the agents talking about Milo. The fact that Mike hadn’t informed her that Milo was missing. Iris doesn’t trust that they can keep her safe. At the very end of the episode, Mike enters his old office. he shocks to see Iris. she inquires as to whether or not the rumor that Milo had escaped was real. Mike is unsure, but his gut tells him yes. Iris asks Mike if he firmly thinks that Milo has fled, and Mike gives an affirmative response to her question.